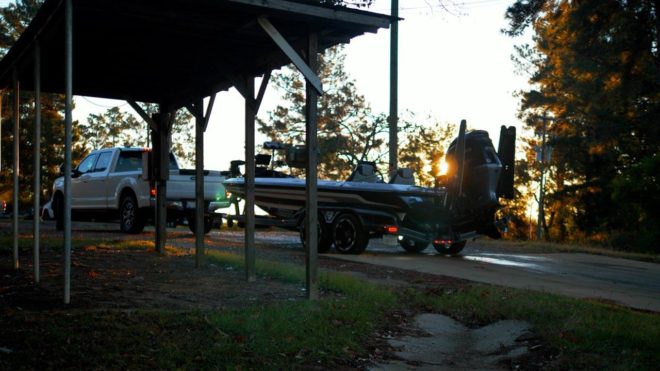 Members of the pro staff offered some classic etiquette fails, but they also offered advice that solidifies what is and what isn’t acceptable on the water. Today, we extend the idea of fishing etiquette to boat ramps, areas that regularly feature far more congestion than the acres of water fished.

Boat ramps can be the most frustrating element of a fishing trip. Inexperienced — and sometimes experienced — boaters often clog ramp lanes with inefficient launches. The reasons are many and varied but ultimately can be summed up as a general lack of education and/or practice and a lack of preparation prior to entering the launch area.

As one pro staff member pointed out, he suddenly found himself with a new, larger boat but no guidelines or instructions about how to launch.

“It was almost like I was supposed to know what to do,” said Louisiana pro staff member Nick DeWolf (Wolkpak Fishing on YouTube). “I’d never had a bigger boat before — I had fished from a jon boat — and there were considerable differences in how to handle the new boat.”

Trial and error allowed Nick — and almost all other boaters — to come to that understanding of a quick and efficient process.

Two keys to efficiency emerged out of discussions about boat ramp etiquette with the ACC pro staff. The first involved prepping the boat before entering the launch area. The second involved actually backing the boat into the water.

“The number one problem that I see is people don’t put all their coolers, jackets, and extra stuff in the boat prior to launching,” said Goose Gutzman, an experienced angler who fishes numerous lakes near his home in Minnesota. “They back down the ramp and start unloading their stuff from their vehicle while blocking the ramp.”

Added Mississippi guide Tim Howell (follow Long Branch Guide Service on Facebook), who launches multiple times per week on Grenada and other nearby lakes, “The No. 1 log jam at the ramp is people that do not have their boat ready to launch when they get on the ramp. Please have everything unstrapped and unhooked and ready to go when you get on the ramp.”

A couple of suggestions from pro staffers will help overcome a lack of experience. First of all, practice backing before coming to the lake. Watch a video on the subject, especially one that teaches the use of mirrors. A second suggestion involves haste: Don’t hurry. No one, not even the most hardened fisherman, expects you to hurry. Slow and steady is best and much preferred over repeated failed attempts or a jacknifed trailer.

A second bit of advice about backing a trailer involves taking up too much space. The basic premise: Stay in your lane as much as possible. This idea also applies to loading boats as well.

“Most ramps don’t have lanes painted on them, but (boaters should) play like they do when backing in,” said Chris “Sarge” Gill of Texas (Asleep at the Reel on YouTube). “We have a three-lane ramp on Lake Palestine, and I have seen one boat take up all three.”

Perhaps the worst scenario involves backing down the middle of a two-lane ramp.

One of the great things that came out of the discussion about ramp etiquette was that most pro staffers said they were willing to help inexperienced boaters.

“The biggest issue is guys trying to rush a novice to put their boat in,” said Missouri pro staffer Darin Keim. “We were all beginners at one time. They think the experienced guys are mad, so they try to rush more, making things worse. Instead of copping an attitude, let’s help them. We also need to encourage them to take the time to do it safely.”

At the least, offer to hold the rope for someone launching solo.

“I’ve been there myself,” Nick said, “and not that long ago. If someone needs help backing, I’m happy to do it if they are comfortable with it. Offer to help in any way that you can.”

Consider the following suggestions for becoming more efficient at the boat ramp. These ideas ultimately allow for an easier process and more time on the water for all people involved.

Boating etiquette applies to ramps just as much as it applies on the water. Following basic guidelines for launching includes patiently and respectfully waiting on others to get their boats in the water as well. And if you see someone struggling or boating solo, lend a hand. Everyone wins from that experience.

The need to help may arise at your local boat ramp or at a national tournament. For example, ACC Crappie Stix owner Andy Lehman noted how one pro staffer helped another at the Mr. Crappie Classic in Shreveport, LA, early this fall. Texas guide and pro staffer Les Milligan fished the tournament by himself and received help loading at the ramp from Missouri angler Clint Pipes, who has since become a member of the ACC pro staff.

“That was one guy seeing another guy who needed help,” Andy said. “Clint wasn’t even with ACC then … just helping out. If you see a guy by himself, offer to help.”