Boating, Fishing Etiquette Applies To All 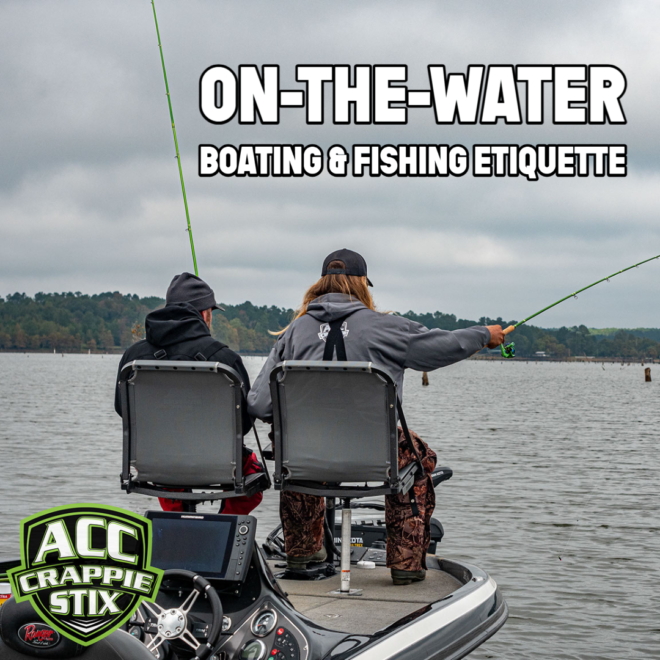 In the words of one ACC Crappie Stix pro staff member, on-the-water boating and fishing etiquette is a “touchy” subject.

The subject is “touchy” because the rules and responsibilities are subjective to a great extent. What is acceptable to one crappie fisherman is unacceptable to the next, and the definitive book of crappie fishing etiquette has yet to be written.

The lack of clear-cut guidelines does not negate the need for personal boating and fishing etiquette at all times on the water. Yes, the major tournament circuits (and most minor ones) have extensive sets of rules. However, the rules and regulations for tournaments barely touch on various issues of boating and fishing that present themselves on a regular basis.

One rule common to most organizations involves distance between boats when competitors are “anchored.” Most read something like this: Fishing within 50 feet of a marina gas pump or within 50 feet of a competitor’s boat, which is first anchored, is prohibited (Trolling motors must be in up position and anchor rope visible to be considered anchored). A safe and courteous distance (50 feet) should be maintained when trolling motors are in use.

50 feet? That common rule, therefore, suggests that 51 feet is an acceptable distance, yet the unwritten rules of etiquette dictate that limited distance is not acceptable in most situations.

Nick DeWolf, ACC pro staffer from Louisiana who produces YouTube content under the Wolfpak Fishing label, said most fishermen and tournament competitors are respectful of infringing on spots. There is always that one guy, however, who pushes the limits of what is acceptable.

“We had a deal last year when the lake we were fishing had no timber, no brush, nothing,” Nick said. “We finally found a spot that had three little trees underwater. You couldn’t see them. They were probably in a radius of 20 yards.

“We had another competitor come in about 50 yards from us, and we were talking to him. I thought that maybe they were fishing something there that we didn’t know about. But they just kept coming. I was like, ‘what’s going on?’ I had a partner at the time who got pretty upset. He was like, ‘Are you going to split the check with us?’ He was literally trying to fish the same trees as us. In that situation, that’s a little much.”

“Man, we see this most every single day here in (Mississippi),” said guide Tim Howell (follow Long Branch Guide Service on Facebook). “There are some days we can fish without drawing a crowd but not many. Most everyone on the lakes knows who we are and looks for us. Most fishermen give us enough room, but there’s always that one guy that’s gonna push the limit and get right on top of you and be like Velcro.

“When it gets crowded, most times I will just leave or get out away from everyone and let them push the fish out to me. It works most every time.”

Sometimes, fishing in a crowd is acceptable. Even have-to cases exist in low-water periods or

“What is acceptable?” Nick said. “If you’re fishing a channel and so are other boats, then getting close isn’t a big deal. But if I’m sitting on top of one brush pile and you try to fish it with me, that’s pushing it.”

For every acceptable situation, multiple occasions exist when other fishermen violate that acceptable distance.

“What really (angers me) is when I’m fishing straight-line timber, nosed into the wind, and a boat pulls up 20 yards in front of me,” said Texas guide and new ACC pro staffer Sam Parker (follow Sam and his guide service, Freshwater Fishing Adventures, on Facebook). “That forces me to crank up and move or fish behind them. They just took away my path. As a guide, time is important and every minute counts.”

Of course, not all etiquette violations involve infringing on locations. One situation in particular prompted various responses from the pro staff about boating etiquette.

“We all have certain situations where we are already fighting wind, boat control, and you have that certain one come into casting range at that ‘idling’ speed, transom digging, putting off a wake of two feet and thinking they’re doing a good deed,” said Alabama pro staff member, guide, and tournament competitor Jeff Jowers (friend Jeff on Facebook for his regular reports from the Coosa River). “I would rather you scream by, resulting in a much lower wake.”

That situation is what prompted the “touchy” response from Nick.

“I’ve run into situations when I run past people at full speed, and they get so mad,” he said. “I’m like, ‘what do you do?’ Do I slow down? Probably slowing down would be the best thing, but then some people want you to go by at full speed.

“If I’m in the channel, I know I’m in the boat lane. I would rather a boat come by me at full speed if possible, (creating) less of a wake and getting by faster, so I can get back to fishing.”

Added Chris “Sarge” Gill (Asleep at the Reel on YouTube), “For me, the main issue I have on my lakes is being waked by people that don’t know the lake. I go by the rule of treating others like you want to be treated, meaning if I have to come close to you, I will slow down, even to idle speed.”

Another fishing violation involves stealing coordinates. Waypoint pirates abound, many of them doubling down on the etiquette violations by punching in coordinates while waking the boat sitting on a spot. On other occasions, it’s the person sitting in the boat who returns to a location.

“As far as stealing coordinates, I do guide from time to time,” Jeff said. “I’m selective about it and that’s the main reason. That’s why you have ‘guide fish’ and you have ‘tournament fish’ that you don’t dare take someone to unless you can accept that place becoming public.

“Some don’t like to do their homework and want you to do it for ’em, and they reap the spoils. But then again, there is no law against it. It’s a chance you take and hope most have the same decency and respect as you.”

Jeff added that there is little that can be done about someone pulling up and marking spots. He said he expects “a little more decency than (another fisherman) stopping 50 yards from me and pulling the Leupolds out, knowing I can clearly see you and start punching buttons on that unit. People like that burn me up. What they need to do is learn to utilize and learn how to use that unit and find their own honey holes. Believe me, it’s way more rewarding.”

Certain guides have their own set of tricks that help negate the impact of anglers who follow them, who return to their spots, and who even trail along from the ramp.

“I’ve had boats follow me from the ramp to wherever I’m gonna fish a lot of times,” Tim said about guiding on the Big 4 crappie lakes in Mississippi. “I have also carried those pelicans on some wild goose chases around the lake as well. I kinda enjoy it.

“We will also play defense at times if there are a couple of guide boats fishing in an area close together. Two or three boats will block for one boat, kinda keep the other boats off the one boat while he’s catching and then we swap up. I hate to be that way, but we have to do it at times.”

So what are the rules of the road when it comes to boating and fishing? Certainly rules established by the U.S. Coast Guard dictate general boating activity, and knowledge of this type of guidance is mandatory for anyone pursuing a boating or a captain’s license. Those rules, however, do not govern certain boating and fishing practices in practical day-to-day situations on the water. That’s where the ethical concerns come in.

The following guidelines, while admittedly idealistic, are a good starting point. Follow them and hopefully fellow boaters/fishermen will do the same.

Here’s a final parting shot from ACC Crappie Stix owner Andy Lehman, whose experience on the water as a guide and as a fisherman provides unique insight into the topic.

“Always err on the side of good, on the side of what’s right,” Andy said. “That’s a good lesson for fishing and also for life in general. Saturday, I was on the lake and saw a boat pull up within 50 feet of a bank fisherman. I thought, ‘with all the water, all the thousands of stumps available to fish, just find another spot. Do the right thing.’ That’s what we all need to be doing when we’re fishing.”