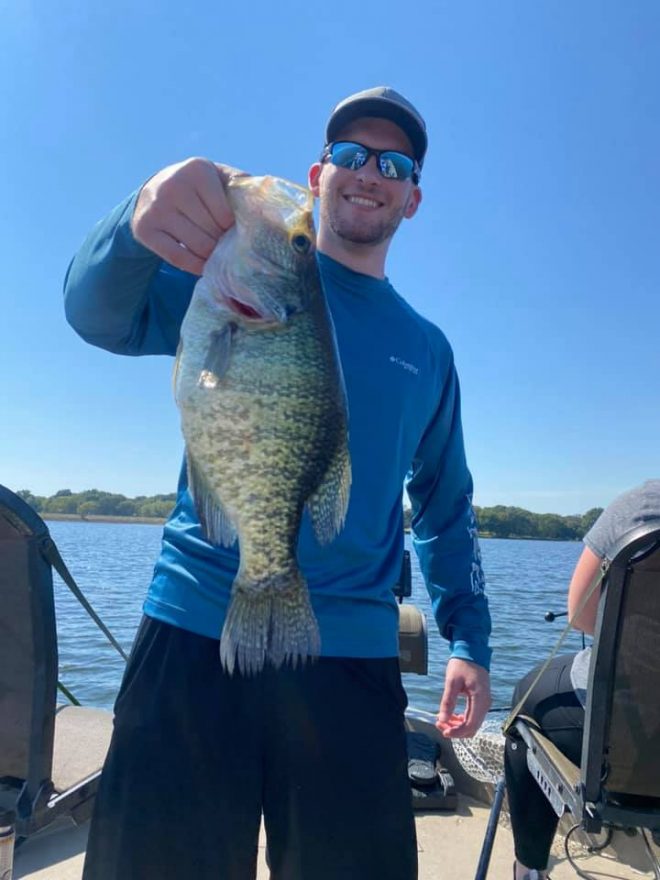 Practicing for the first ACC Crappie Stix Owners Tournament almost a year ago on Lake Fork in Texas, guide Jacky Wiggins flipped a cast toward a big target that appeared on his LiveScope screen.

In some ways, the cast was typical of thousands that Jacky and clients make from his big center console boat each year. In other ways, the cast was unusual, mainly because of the lure on the end of the line of the ACC jigging pole.

The lure sank quickly toward the big blob that filled a box on the screen. The blob moved and became more fish-like as the lure settled over its head, and Jacky set the hook. Seconds later, a Lake Fork white crappie that weighed well over two lbs. flopped on the deck.

“I’ll need about six more like that one if I hope to have a chance in the tournament,” Jacky said. “But that fish tells me something.”

The lesson learned was that big fish will readily eat abnormally big baits. Jacky actually already knew the outcome of his experiment in advance, but he continued to toss the same lure for almost an hour to confirm his thoughts. The bite was steady if not torrid, producing more tournament-quality fish over an hour-long period.

The lure was a four” swimbait on a 3/8 jig head, lures actually marketed to target bass fishermen. Jacky, through his years of guiding and fishing experience, knew that “crappie always follow the bait.” As he cleans thousands of crappie each year, he sees a recurring feature of the bigger specimens as water temperatures drop in the fall. 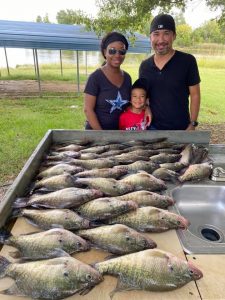 “What I notice as I get into October — I haven’t switched over to jigs yet, we’re still using minnows — as the water cools off, I see a change in what the crappie are feeding on,” Jacky said. “I clean 50 crappie every single day. Twenty-five of those 50 have shad in their stomachs in the three- to five-inch range.

“I don’t clean crappie (in the fall) that have minnows. Sometimes earlier in the year, I will see some smaller threadfin shad, one- to two-inch shad. Once we get into October, every time I slice open one of those (bigger) fish, the shad will be three- to five-inches long.

“That’s where the big-bait thing came from is seeing those bigger threadfin shad in their stomachs. That’s what they are actually targeting. The bigger fish that we are catching on the trees are targeting bigger shad.”

Jacky said the water temperature in Texas is just now starting to get right for the big-lure, big-fish bite in the fall, one that lasts through the fall and a good part of the winter and produces good numbers of fish 12” or bigger.

“The big-bait thing usually starts around the middle of October when the water gets down into the 70s,” he said. “I start to notice it about that time when I am cleaning fish. I tell customers when I see the shad and the fat in their stomachs that (the fish) are literally fattening up for the winter.

“It really is about water temperature, and as of this week, we are about 73 degrees. As the water gets into the 60s, the jig bite will be on fire.”

Another key for Jacky is water clarity. He said the big-bait approach does not always work in clear water, but stained or even muddy conditions are ideal. He added that the approach translates to other fisheries as well.

On an average day, Jacky does not put a four” swimbait on his client’s line, usually settling for a slightly smaller version. He fishes the lures on the same rods that he uses for smaller jigs at other times of the year, 10’ ACC models for customers and 13’ ACC jigging poles when he is tournament fishing. The longer rod allows the extra reach to avoid spooking key fish in tournaments. Jacky noted that either length will flip big crappie into the boat.

Lure manufacturers, including the 4B Baits that Jacky normally uses,  have taken note of the big-lure bite and have started to develop products aimed at the crappie market. When fishing the bigger swimbaits, Jacky uses heavier Steelhead hooks on jigheads up to ½ oz.

“That size jighead will have hooks size 2 or even 1,” he said. “Last year, I went exclusively with Steelhead hooks. We fish those on 20-lb. straight braid, which allows us to hit that fish as hard as we want to hit them and there’s no flex.

“I was losing some fish, and getting away from the sickle-style and light-wire hooks eliminated that situation. That hook is not going to pop out, and we can put as much pressure on them as necessary in order to get them out of the tree and actually flip them into the boat.”

Jacky said the big-lure bite typically continues through the fall and into the winter until just before the spawn. At that point, he downsizes to a more traditional two” plastic on smaller jigs.

Avoid the crappie-only-eat-small-baits mindset and give the bigger baits a try. Across much of the country, adopting a go-big-or-go-home approach to crappie fishing means bigger fish in the livewell as the water temps cool.