The Pursuit of World Record Bluegill 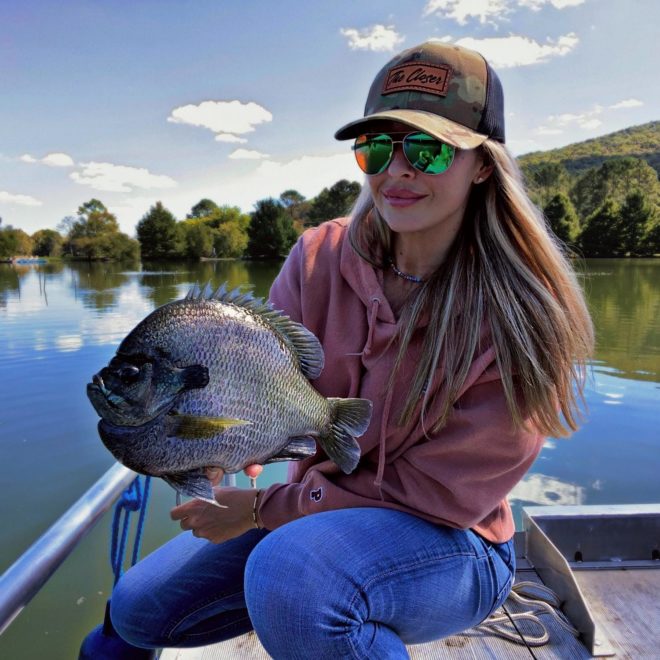 The rocket scientists in Huntsville, AL, helped guide the country to the moon and back in the 1960s.

Sarah Parvin’s work in the north Alabama town may not be equal in scope, but her mission is still ambitious relative to the fishing world. What is more uncommon than a trip to the moon? Catching the world record bluegill, of course.

Sarah not only has designs on growing a new world record bluegill but also on promoting the oft-neglected sunfish to its rightful spot alongside more popular species. Sarah and her father, retired radiation oncologist Dr. Dennis Olive, have developed their own laboratory on the outskirts of Huntsville, aptly named the Slab Lab.

In the process, Sarah has become known as the Slab Queen and uses her social media network to promote the work, posting regularly to various platforms under the moniker Sarah the Closer Parvin. The nickname actually comes from her other full-time job as a real estate/mortgage specialist in the ever-booming Huntsville market.

Following in Part I of a two-part series is their story.

The origins of the mission can be traced back some 27 years when Sarah’s father built a five-acre pond on recently purchased property, with the intent of growing trophy largemouth bass. Through years of near-daily research and development, the project achieved its goals at times but also occasionally experienced the opposite, mainly in the form of fish kills.

“I was nine or 10 years old when they started working on this piece of property, which is now where the famous Slab Lab is,” Sarah said in a recent phone interview. “They built the pond before they built the home, so I was a part of that, digging the pond, putting the structure in from day one. I just remember all that went into it, and then fishing with my dad. We would get on the boat for hours. It’s been a huge part of our life.

“It really wasn’t until almost two years ago now that we saw these coppernose come in and steal the show. We’ve always been a trophy bass pond. To see the superior genetics that we have from American Sport Fish Hatchery is what’s really made us stand out in the pond management world and the fishing world.”

One of the low moments in the pond’s evolution occurred four years ago when an extensive algae bloom wiped out the entire fish population. While disastrous at the time, the fish kill launched a regeneration that led to the pond’s current status. Back to the drawing board, Sarah and her father formed a partnership with American Sport Fish Hatchery (https://americansportfish.com/) to re-stock the pond with a combination of coppernose bluegill and the hybrid Tiger variety of largemouth.

Moving two years forward, Sarah recognized something new and different happening in the pond. The coppernose were growing to unprecedented sizes and proportions. Sarah and Dr. Olive found themselves in the midst of the perfect storm of habitat and genetics and realized something special was taking place.

“About two years into the program, I started catching the bluegill, and they had a different body dynamic,” Sarah said. “They looked different – they are pure coppernose; they are not hybrids – so I went to dad and said, ‘We have something unique going on here. We need to consider a different avenue at this point.’ We halted our bass program.” 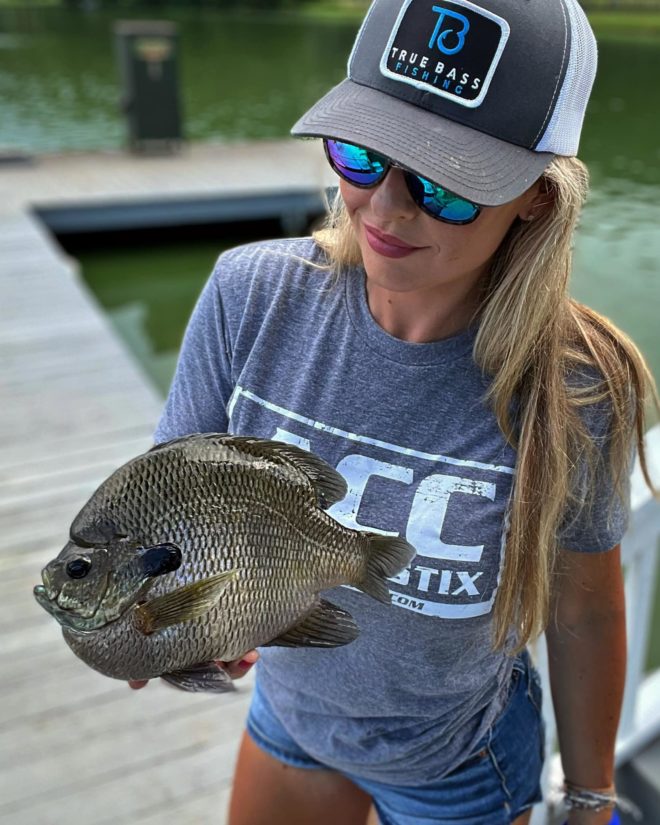 The bluegill were growing at a phenomenal rate, and the pond was suddenly full of fish over two lbs., not world-record class exactly but not an unheard of size for a well-managed pond. Sarah saw something special, however.

“We don’t have just a few big fish,” she said. “We have a lot of big fish, which makes us unique because of the water. We have a eutrophic pond. The water is old. It presents its challenges, but it’s also the reason that these coppernose can grow as much as they grow.

Sarah sums up the eutrophic nature of the pond with one word, “old,” but it also involves what she calls the “delicate dance” of developing a facility to grow trophy fish.

“It’s the balance of everything in the pond,” she said. “It’s an entire ecosystem. You want fertile water to produce phytoplankton and zooplankton for the small fry and small hatchlings to eat. That’s what they grow up on. You have about 90 days – the first 90 days – of a bluegill’s life to where you can put weight on them.

“That’s when you grow a trophy, not when they are already two-plus pounds. From the time they are fry in that first 90 days is critical in filling out that trophy fish. So they have to eat that plankton. Some blooms are good, and you need them, but when you have fertile water like ours, it becomes a delicate dance of how far you can push without causing harm to the fish. Too much of a good thing is not a good thing.”

As the fish mature, the diet changes to Optimal Fish Food, “a high-protein, low-phosphorus food.”

“In normal circumstances,” she continued, “I would never suggest that other people feed the way that we feed unless they have their pond management completely dialed in because there has to be that balance we maintain. We feed very, very heavy. We taper the feedings depending on time of year, water temperature, and things like that.”

Sarah said the heaviest feeding occurs during the warm-weather months with less food available to the fish when the water cools and their metabolism slows.

“You only want to feed as much as they’ll eat,” Sarah said. “You don’t want excess food floating in the water. One, it’s a waste of money, but it also affects water clarity. It affects everything.”

The result has been a growing population that takes on various characteristics of a trophy. The female bluegills grow to an impressive length; the males take on the classic dinner-plate shape but also have another unique part of their anatomy. 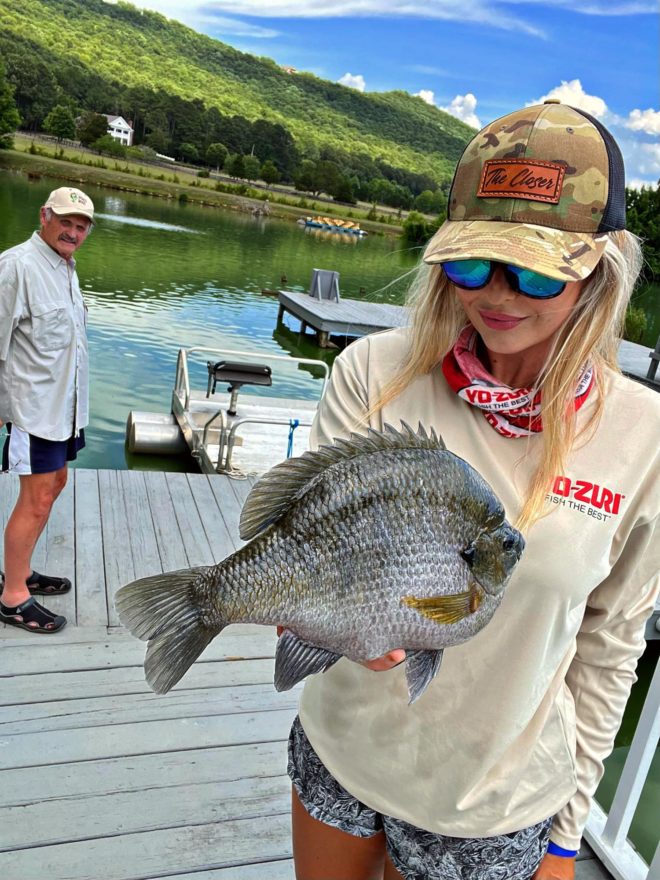 “A trophy male – really anything over 1 ½ lb. – we’re looking for that body dynamic, the shape, where they have the helmet. The male bluegill will get this huge dome on the top, which is several inches above what it would be in a normal body of water. A lot of our male bluegills have that big, showy helmet that they get. It’s actually where they store extra calories so that you know they are eating, you know they are feed-trained and are taking that feed.

“The females tend to get longer in our pond. They have that 11- to 12-inch length. But they are heavy; they are thick. The males get round, a spherical shape to them, a shape that’s hard to capture in photographs. Sometimes it’s tough to show the true size of these fish. I try to show certain angles that capture just how big they are. That’s what we are looking for, looking for the helmets (on the males) and the length on the females.”

In the two years since the trophy fish began to appear in large numbers, the weights have continued to increase. Sarah fishes for the bluegills almost daily. Her personal best from the pond weighed 3 ½ lbs.

The bigger fish are not easy to catch, basically loners that stake out a territory and avoid the schools of smaller fish.

“I know the pond intimately and know where they like to hang out,” Sarah said. “The smaller ones are easy to catch. Not so much with the bigger ones, but I can still catch them regularly.”

She is not sure just how big the fish have grown, probably not to world-record size just yet, but a four-pounder is a definite possibility. The current world record – a 4-lb.,12-oz.,15-inch giant from Lake Ketona near Birmingham, AL – has stood since 1950.

“We’re confident that (a four-pounder is) there,” she said. “Electro-shocking is not an exact science. The bigger fish can escape the current, but when you are shocking up multiple two-plus-pound bluegill in every area of a pond, chances are that you have much bigger fish. We’re confident that we are getting close.”

In the meantime, Sarah will continue to promote all things bluegill. Follow her regular posts on Facebook (Sarah Parvin (The Closer), Instagram (@sarah_the_closer_parvin), and TikTok with many of them finding their way to other social media platforms.

“I want people to start talking about the bluegill in a different light,” she said. “For so long, it’s been sort of like a kid’s fish. But it’s truly how most anglers got their start. It’s the gateway tug. It’s an absolute sport fish.

“I want that recognition for the bluegill, so there’s more to this than just trying to grow a world record, which sounds very catchy and flashy, but it’s much bigger than that. I really want people to explore panfishing. Chasing a trophy bluegill is just like chasing a trophy bass.”

Sarah may not be going to the moon and back, but her promotion of bluegills and pursuit of a world record is a great story to follow. Will she close the deal? That remains to be seen, but you can bet she is passionate about the mission.

(In Part II, Sarah shares ideas about pond management and how they translate to the average pond owner. Check for it soon on the ACC Crappie Stix blog.)