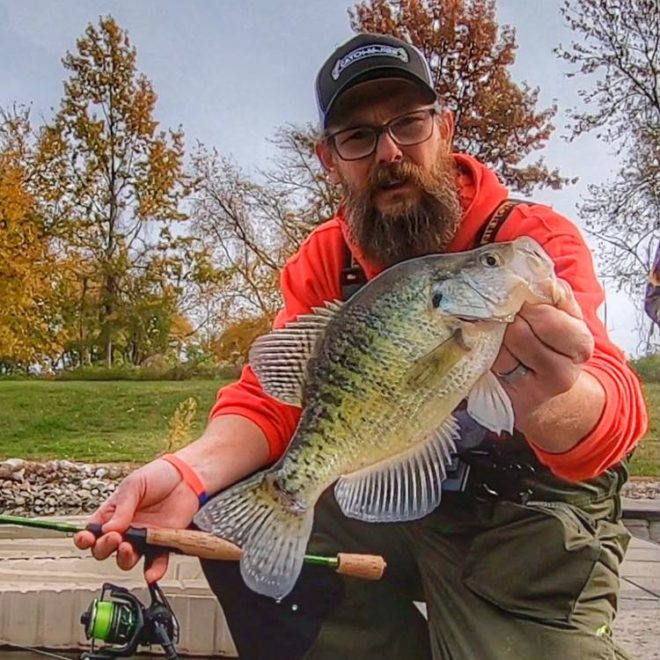 ACC pro staffers span the North American continent with most focusing on the pursuit of crappie as guides, tournament competitors, and every-day fun fishermen. Last month, the ACC blog launched a series of pro staff profiles with a look at guide and tournament competitor/director Matt Xenos, of Maryville, Tennessee.

This month, the focus is on central Illinois fisherman Jake Byerline, who primarily fishes for crappie and catfish from the bank and in the process, creates YouTube content under the label Jiggin’ with Jake.

Following is Jake’s fishing and digital media story, mainly told in his own words.

“Living in central Illinois, I’m centrally located between several good fisheries in my area, Clinton Lake, Lake Decatur, Shelbyville, Sangchris, Lake Springfield,” he said. “All of those are pretty much within an hour’s drive of where I am located. I am pretty fortunate with that.”

“I was creating some content for them in regards to photos and posts on their Facebook page,” Jake said. “The owner sat me down and said, ‘You’re creating some pretty good stuff and are successful with it.’ He asked where I wanted to go with it, and I said, ‘I want to create my own YouTube channel.’

“He handed me over a GoPro and some equipment for it. I got started and it kept evolving from there. (In addition to crappie), it turned into chasing some big catfish as well.

“We’re just trying to keep it going. Right now, I’m kind of in a tough spot. I just lost my father last month totally unexpectedly. I’ve taken a little time off just to recup and re-focus, cope with some of the grief going on in my family.

“I do plan on hopping back on the horse and getting back out there. I thoroughly enjoy creating content and hearing and seeing people’s reactions, some of the great stories they share when they try some of the things that I do.”

Some of his favorite content is highly personal. A special one involved his father.

“Personally, my favorite video that I’ve done is when I took my dad out chasing some big blue cats,” Jake said. “He had taken me out fishing since I was a kid, but he never really targeted big fish. I didn’t get him on a giant by any means, but I put him on a 20-lb. blue cat.

“Just that experience and watching him reel it in and him saying, ‘That’s the biggest fish I’ve ever caught.’ That to me was an incredible experience. Being able to record it, edit, share it was great. It didn’t do great as far as (video numbers) were concerned, but it’s something that I’ll have for the rest of my life.”

Among his crappie-fishing videos, some of his most successful have occurred much more spontaneously.

“As far as crappie fishing goes, a favorite memory or video that I’ve put out would probably be some of the videos that I film on the fly,’ he said. “I did one titled ‘how to tie a double-jig rig,’ just a short little video that I filmed with my iPad on the back of my pickup truck. You just shoot from the hip and let it fly. I like that kind of stuff and enjoy creating that type of thing.”

He said the shorts are something that have evolved since he first started his YouTube channel. He’s gone from what he called “tv-show length” to much more focused content.

“Some of them are no more than three or four minutes long,” he said. “When I first started, I had the mindset of looking for a regular TV show, so I was doing 30-minute videos. I found out real quick that you lose viewers after a certain period of time.

“I changed tactics and went mainly to 10- to 12-minute videos for my target time slot. It does come out better because you’re more concise and on target of what you’re wanting to talk about and to share with your audience.”

Creating content does not come without its challenges, especially when working solo. Jake said any number of variables interrupt an otherwise good video.

“Beyond that, I have equipment failures. Sometimes my GoPros act up and want to power down in extreme heat or extreme cold. Sometimes they power down at the most inopportune times, right in the middle of a good catch or right in the middle of a good piece of information that I’m trying to share. I go back and need to re-do it, but you can’t re-do a catch.”

At other times, Jake incorporates other people in his videos, including his wife Tia and his son. Jake also has two daughters and two grandchildren.

When asked about his favorite type of fishing and his favorite subjects for creating content, he said, “Honestly, I like it all.”

“The way that I look at it, if I want to stay busy, I go out crappie fishing,” he continued. “If I just want to sit and enjoy the atmosphere of God’s creation, then I will throw out a couple of catfish rigs and enjoy myself. If I absolutely had to pick one or the other, it would be crappie fishing. It’s always been a passion of mine and I do it every chance that I get.”

Jake generally crappie fishes with a 7’6” ACC model in hand although he said lately he has added the 6’6” spinning/docking shooting rod to his arsenal. He occasionally fishes in the boat with another Illinois ACC pro staffer, Reagan Smith, and Reagan’s influence has led Jake into dock shooting for crappie much more.

“I’ve really been using and promoting ACC products since I started my channel, close to three years,” he said. “I’ve branched out with a 6’6” dock shooter. I’ve got a buddy, Reagan Smith, that loves to shoot docks. I’ve found it’s a good, solid rod that actually works well for a variety of techniques.”

What’s the future for Jiggin’ with Jake? He said some of the themes will remain the same, but the constant flow of how-to content will likely change somewhat.

“My plans are to continue to grow and maybe change my themes a little,’ Jake said. “I’ve always had educational content, and I will probably continue to have some of that, the how-to type of video. I like to share that type of thing, especially with people who have not been out there and have not done what I’m doing.

“But as a bank fisherman, I think I’ve probably done most of the videos like that. I may do one every now and then just to keep some fresh content. More than anything, I’m going more toward sharing my experience, talking about where I’m at, what type of fish I’m catching, just the overall experience.”

Jake offers a few tidbits of advice for would-be YouTubers.

“Stay true to yourself,” he said. “Believe in the product that you are using if you are going to promote it. Try to keep the content coming out. Sometimes a video will fool you. Maybe you’re thinking it’s something people won’t enjoy and then they love it. There’s no such thing as too much content.