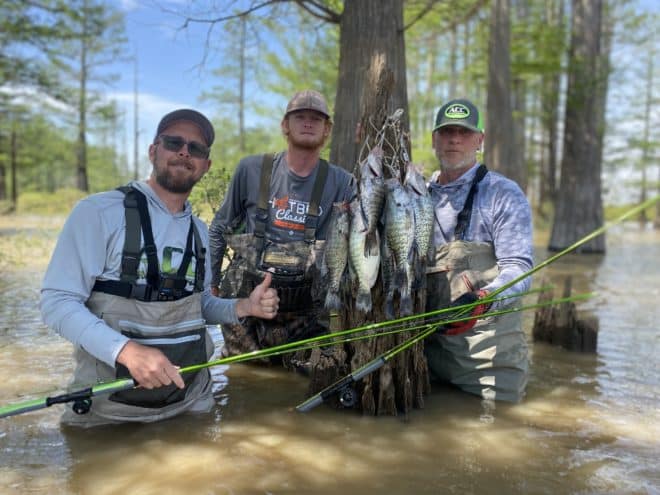 The allure of Mississippi crappie fishing attracts anglers from across the country.

The opportunity to catch big slabs – fish of a lifetime over three pounds – is great, and the publicity generated by tournaments in recent years has only compounded the rush on Mississippi’s famed crappied venues, particularly on Grenada.

ACC Crappie Stix owner Andy Lehman has not been immune to the attraction, making multiple trips to Grenada and the other central Mississippi lakes from his Illinois base. His recent forays south have come with a twist. He wanted to target the big slabs by wading to them.

A first attempt earlier this year proved unsuccessful in a variety of ways, but the urge to wade fish for Mississippi crappie brought Andy back for a second trip in late April. On this occasion, the stars aligned for a memorable return to the swamps of Sardis Lake .

“We fished there earlier and really pushed the wading season just a little bit,” Andy said. “The fish just weren’t ready. Even though we came back toward the end of when the fish are pushed up shallow, we hit it just right.” 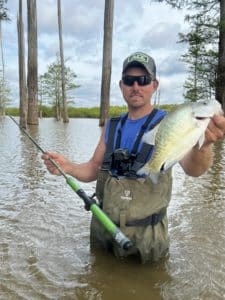 “It was pretty incredible,” Andy said. “Kelon was great and took us to the fish. We’re talking a 12- or 13-hour day of wading.”

The 22-year-old Kelon, of New Albany, MS, has been wading for MIssissippi slabs over half his life. He recalls the days when he begged his father and Scottie to take him on their wading trips.

“I was so small that they couldn’t find any waders small enough to fit me,” Kelon said.

They came up with a solution, however.

“They found a spot with a stump that I could stand on top of,” he said. “They put in a stakebed close to the stump, and I would fish that stake bed while they went out and waded around.”

Kelon has advanced from his childhood stump. Earlier in the year, Scottie came up with the idea for the guide service and asked Kelon to help out. The focus is on wading in the spring with some potential for boating trips after the spawn is over, usually in mid-May. The trip with the ACC group spotlighted just how great wading for Mississippi slabs can be. On the late April outing, the day’s fishing started with an extended wade deep into a Sardis Lake backwater area. Sardis is a huge lake, close to 100,000 acres, just to the north and west of Oxford, MS. Extensive areas of the lake flood when the water rises to summer pool or even higher after major rain events. The water was about a foot above normal summer levels for the trip with Kelon.

“We probably waded for close to a mile, at least for an hour,” Andy said.

While the water was not deep on that portion of Sardis, getting to the fish came with a few obstacles. In particular, ACC videographer Kyle Lasater had difficulty balancing the wading process and keeping his expensive camera equipment dry.

“Kyle had on some wading boots that were too big for him, and they kept getting stuck in the mud and coming off,” Andy said. “We finally got everyone there.”

En route, Andy said, “This place was so far back, so isolated from the main lake, that I expected to see a gator at any time. We did encounter a couple of snakes, but I saw only one so it’s not like they were hanging from every tree.”

Kelon’s chosen destination was what he called a “little slough” filled with flooded buck brush in water about two feet deep. The crappie, particularly the males guarding fry, were there in abundance.

“That’s a great way to catch them,” Kelon said. “It’s a lot of buck brush or iron wood trees as some people call them. Once the water gets to full pool, it gets into a lot of buck brush with vines. The crappie love it. They hold tight to the trees.”

The buck brush is one type of cover that holds crappie for wade fishermen. Another is cypress trees and the knees that extend from their base.

For such situations, Kelon favors a 10-foot ACC Crappie Stix model, using a ⅛-oz. jig with orange/chartreuse or purple/orange Midsouth Tackle tubes. He said the 10-footer is a good all-around size not only to handle the crappie but also to maneuver in the tight spots characteristic of wade fishing.

“That rod is long enough to drop that jig into the tight cover,” Kelon said. “Drop it in there, and they will hit it. If they are pressured, it might take about 10 or 15 seconds to get them to react, but when you jig it, one of those big males will usually thump it.”

Wading has made an indelible impression on Andy.

“It’s everything fishing is supposed to be,” he said. “It’s not just fishing. It’s enjoying nature and becoming a part of it, no boats, no LiveScope, no accessories, just fishing in a very natural state.” 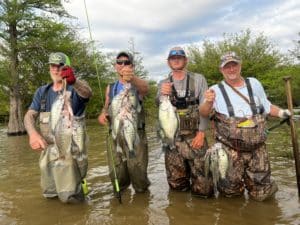 “If you’ve never tried it, it’s something you need to do at least one time,” he said. “It’s definitely my favorite way to fish, just being able to get in the water and being able to fish that thicker cover.