Louisiana Crappie of a Lifetime 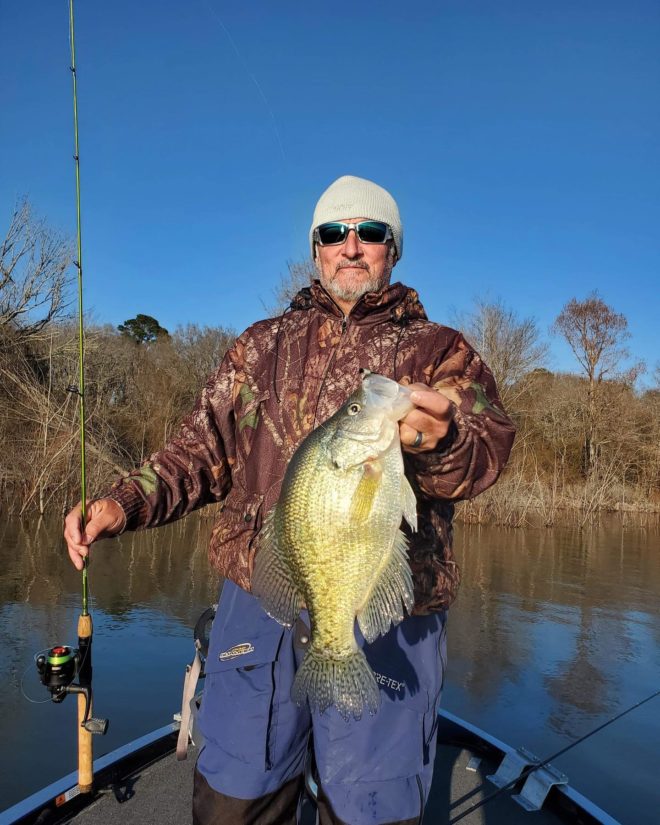 The odds of catching one of the biggest crappie ever landed in Louisiana were even longer, especially after watching a friend hook what was likely the same fish only seconds before.

The Farmerville, LA, resident had been scouting another fishery earlier in the day and got a call from a friend as he was heading home. The friend, Steve Adams, wanted Shane to accompany him to a small reservoir not far from the Louisiana-Arkansas line north of Monroe, LA. Reports of trophy crappie catches prompted the trip.

Buried amidst the many great crappie fisheries in north and northwest Louisiana, this reservoir is something of a reclamation project.  Given to the state by International Paper after its mill closed near there in 2010, it was a major renovation by the Louisiana Department of Wildlife and Fisheries (LDWF).

The LDWF removed most of the existing fish population from the lake during the process of renovation, re-stocking it with a variety of species starting in 2017.

Five years later, Hodge found himself fishing this Louisiana reservoir when big fish came to the net only minutes apart.

“I had gone to check on another lake, and I got a text from a friend of mine who works up here at K & M (Coffee, Corks, & Camo) about the big white perch they were catching there,” Shane said. “Steve Adams called me and said, ‘Let’s go’. Don’t worry about bringing your boat. Get in the boat with me.”

Shane made a quick stop at home, grabbed a couple of 5’ ACC Crappie Stix casting/dock shooting rods and a few boxes of jigs. He and Steve soon found themselves scoping for big crappie after the roughly hour-long drive.

Shane normally fishes Lake D’Arbonne and the D’Arbonne Bayou near his home in Farmerville. He was intrigued by the possibility of catching big fish there after resuming crappie fishing about a year ago.

“I actually crappie fished some when I was younger,” he said. “I quit fishing when I started having kids, but I started back, and my wife and I would go down here on the (D’Arbonne) Bayou and use jig poles and just fish docks and stuff like that. I mainly bass fished.

“The phase of electronics with LiveScope came out and I bought one of them about a year ago and got into that. I mainly crappie fished last year and tried to learn LiveScope.”

Even fishing in a friend’s boat, Shane experienced a peak of the LiveScope revolution on a cool, windy late-winter afternoon. The trip started off with a bang. His first fish easily topped his previous best, later weighing 2.86 on certified scales. 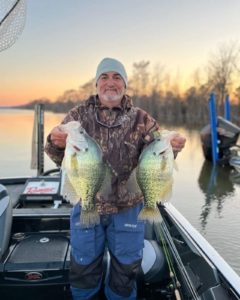 “We were scoping going down through there looking for big fish,” Shane said. “My personal best was a 2.53 until this day. Steve weighed it at 2.83 on his scales, and it later weighed 2.86 on official scales.”

After that catch, Shane was perfectly content to help Steve catch his personal best, at least until the opportunity for an even bigger fish presented itself.

“I put my rod in the bottom of the boat,” Shane said. “I wanted Steve to get his chance. He’s the one who called me. We go a little farther and see a good fish pretty far out. We thought ‘that’s got to be a good one’ just looking at the mark. We got up there to it, and he set the hook. I didn’t really see all of it. I turned for the net, but the fish came off.

In years past, that moment would be the end of the story, the proverbial big one that got away.

LiveScope provided something of a reprieve in this case. Steve never lost track of the fish on the monitor as it eased down the side of the boat and stopped near the back in about seven feet of water. As it moved past, Steve flipped his jig at least twice at the big crappie but didn’t get a reaction.

When the fish got out of range of the jigging pole, Shane picked up his ACC rod and flipped a cast toward it with his 1/16 home-made hand-tie. The cast was perfect, he added.

“The jig was right on top of the fish,” Shane said. “I knew it was going to be right on top of its head. She ate it. I didn’t know she was that big until she came up on her side. I said, “Oh get the net and don’t knock her off. She’s big’.”

Steve netted the fish and immediately put her on the scale, which pushed down to 3.63. The official scales at K&M later weighed her at 3.65, the second biggest white crappie ever caught in Louisiana, according to records maintained by the Louisiana Outdoor Writers Association.

“I got to thinking about it and thought this could be a record of some kind,” Shane said. “I’ve never seen a white perch this size.”

Shane said he burned up his phone telling people about his catch. In addition to contacting family members, he also called Justin Bailey, who works at K & M, and Justin looked up the state record details for him. He also opened the store that night and weighed the fish for certification purposes.

For state record consideration, Shane filled out paperwork and submitted it to the outdoor writers association. As part of the process, he also had the fish examined by a fisheries biologist. The white crappie measured three inches across and 16 13/16 inches long. The biologist determined that the fish was likely one of the first stocked in the lake in 2017.

Shane said he had caught longer crappie previously but never one with the overall girth of the big fish.

“When people say a pie plate, it really did look like that,” he said. 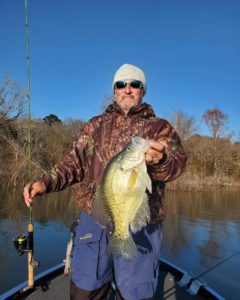 In addition to the ACC rod, Shane’s equipment included a Mitchell Avocet spinning reel spooled with K9 six-lb. test fluorocarbon. He added that he catches most of his crappie casting.

“When I started with LiveScope, I went fishing with a buddy of mine (Heath Rogers), maybe

February or March of last year,” Shane said. “ He’s really good and usually cuts a check in most tournaments that he fishes. He said, ‘Get you one of those green ACC rods. You can boat flip two-pounders with them’.”

A subsequent trip proved that fact, and Shane has been using the ACC brand since that day.

The details of the catch are etched in Shane’s mind. He said he couldn’t absolutely say it was the same fish that his friend had just hooked.

“(Steve) swears it’s the same fish,” Shane said. “I looked down, but he followed the fish (on the screen). I can’t absolutely, 100-percent positive say it was the same fish, but we think it is. It was in the same spot.

“Normally, I would say that’s not true, but I’ve learned a whole lot with this LiveScope that I would have never believed before.”

With his personal best set near the highest standard for Louisiana crappie, Shane said he might never get a chance to improve it. He is content for the moment with a fish that’s a catch of a lifetime for most fishermen.