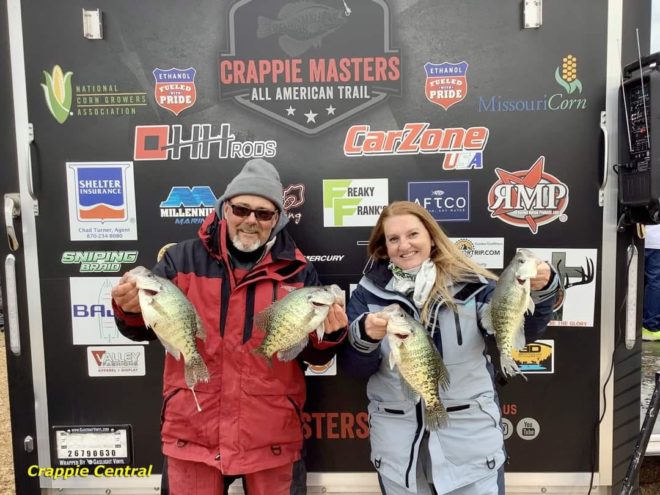 If competitive crappie fishing were a boxing match, the weather scored a near TKO during the  Crappie Masters national tour event on Louisiana’s Lake D’Arbonne on the final weekend of February.

Fishing against a field of over 100 boats, competitors had more than just fish to worry about. Bad conditions on Friday worsened on Saturday with the trifecta of cold, wind, and rain making for miserable fishing on Day 2.

As always, the competitors, including five teams associated with ACC Crappie Stix, shrugged off what were labeled as “brutal” conditions, surviving the barrage by mother nature and posting strong finishes in the 118-boat field..

Among ACC pro staff team members, Craig “The Crappie Cowboy” Nichols and Nick DeWolf landed in the top 10, Craig pairing with Rachel Criner for sixth place and Nick, fishing solo, claiming 10th. Nick edged ACC team members Justin Smart and Wesley Miller by .01 of an ounce for the final spot in the top 10.

“The weather definitely won,” Craig said. “It was brutal.”

Nick (Wolf Pak Fishing on YouTube) called Saturday’s round “the most miserable conditions I’ve ever fished in. Even last year on the same lake, we had to break ice with the boat to get to weigh in. (Even then, it) wasn’t near as bad as this.”

In addition to the 32-degree weather, 15-mph winds, and consistent rain, anglers faced a lake that had been bombarded with tournaments on three consecutive weekends. Craig (follow the Crappie Cowboy Craig Nichols on Facebook and YouTube) earned third place in the Crappie USA tournament the previous week and used the experience to finish strong in the Crappie Masters.

“I knew the water temperature had been up to about 60 degrees before the lake got hit by the fronts that everyone’s had,” Craig said. “I went to some of my mainlake areas and didn’t really see much. On Friday before the Crappie USA tournament, I went to a pre-spawn area that didn’t get a lot of pressure. It was quite a ways north of where everyone else was fishing.”

The spot yielded a 13.27 string in that tournament and still held fish the following week. Craig, from Oklahoma, only visited the spot once while pre-fishing for the Crappie Masters and caught a couple of tournament-quality fish to confirm they were still there.

Craig found the fish biting early during Saturday’s final round with the spot eventually yielding a two-day total of 25.92. Craig said he caught the fish on “smaller plastics” and a minnow rig with a prop blade on a 1/8th-oz. head. To complete the package, he dyed his minnows chartreuse, delivering the rig with a 13-foot ACC Crappie Stix “crossover” model rod.

“The fish were a bit more lethargic than they had been,” Craig said. “You had to sort of wake them up. If you dropped right on their head, they would take off. But if you got that bait out in front of them and let them know it was coming, they would smash it.”

Nick dropped a 13.70 bag on the tournament’s first day – good enough for fourth – but the weather conditions factored into his chances on Day 2. His limit weighed just 10.73 lbs., leaving him with a 24.43 total.

“About an hour in (on Day 2), my brand new muck boots were leaking water,” Nick said. “My socks got wet and ruined my day. I couldn’t stop shaking to hold my rod steady.”

Nick also used a long ACC jigging pole, a 14-footer, and a minnow rig to combat what he called “spooky and finicky” crappie.

“If you got a bait within five feet of them, they would shoot out like a rocket,” Nick said. “I had to stay way off of them and use the longest rod I had. About one in 50 fish would eat.”

Among other ACC teams, the Louisiana duo of Justin and Wesley finished 11th with 24.42. Another Louisiana ACC team, Tim Hebert and Andre Smith, placed 24th with 22.52, and Joey Cook, from Oklahoma, and partner Mike Humphreys claimed 39th with 20.39.

To emphasize just how tough the fishing and the conditions were, over 20 teams from the field failed to weigh a fish either day.