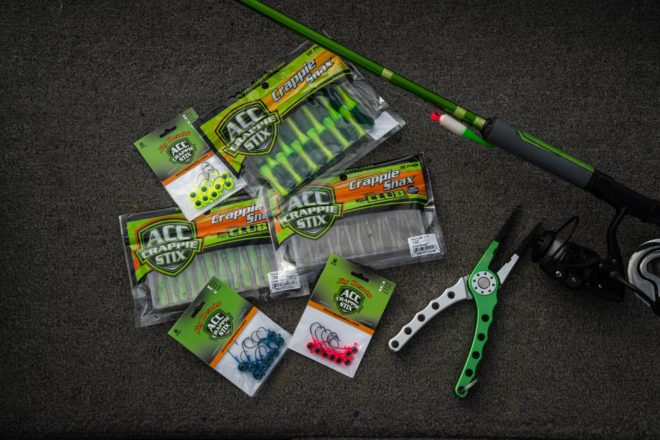 The distinctive green rods by ACC Crappie Stix make them some of the most recognizable in the fishing industry..

A more recent addition to the ACC lineup is quickly gaining recognition as a quality product as well. In addition to the rods designed to fit a variety of fishing situations, did you know that ACC also offers a line of jig heads and plastics? 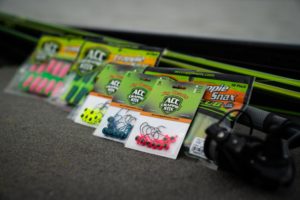 The lures have been a welcome addition to the lineup of many fishermen, including members of the ACC Crappie Stix pro staff.

“The 3/16 oz. jig head with the small Crappie Snax is money!“ said Clint Pipes, who puts the ACC products to use on Truman and other Missouri lakes.

One of the first reviews by customers reads, “As far as jig heads for sacalait (crappie) go, these are the best that I’ve ever used. The color is bright and doesn’t chip off. The eyes are big and reflective. The lure keeper is pronounced and doesn’t let your tube or minnow back off of the jig. This is a really great product.”

“I love these jig heads,” reads another review. “The hooks are really sharp and strong. My favorite part is the bait holder. It doesn’t swell out or deform your bait. It keeps your bait looking and swimming naturally (and) also keeps your bait from slipping down the hook.” 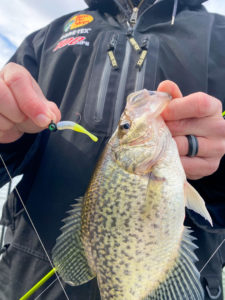 The eyes are one of the most distinctive features of the jig heads and cover the sides of the pill-shaped design. The jigs come in sizes ranging from 1/32 to 3/16. Another major selling point is the Mustad hooks, stout enough to handle the biggest crappie

“I don’t worry too much about jig head color,” said Oklahoma guide Don McClish (PointBreak Crappie Guide Service, 918.316.3363). “A stout hook is my main concern, and these have performed well with plastic, and I also use them to tie hair jigs.

“As for weight and the use of modern technology, I let the fish dictate what I use, but my preference is a 3/16.”

Don is one of many who create their own hand-ties with the jigs. Louisiana angler Keith Acker is another.

“I mainly use hair jigs, so I cut the keeper off of the jig heads and tie on them,” said Keith (follow Keith on Facebook for fishing reports from Toledo Bend and other northwest Louisiana fisheries). “I prefer the 1/8 and 3/16 for the bigger, stronger hook.”

“I use the jig heads for plastics and hair jigs,” he said. “They are top notch. Great quality with the new design.”

The Crappie Snax, nicknamed “The Club,” comes in two sizes, the original 2.5” version and the latest edition, a 1.75” model introduced early this year. Described as “club-shaped” with a fluttering tail, the Crappie Snax perfectly complements the jig heads.

“I am predominantly a hand-tie guy, but there is always going to be a day that they want plastic, said YouTuber and pro staff member Charlie Burrow (GO FISH with Charlie Burrow), from Louisiana. “I mean there’s days I want meat and days I want donuts.”

Pro staffers use the plastics in a variety of ways, originally modifying the larger models to fit their needs.  Nick said the crappie in his area generally like a smaller profile bait, and while he has yet to use the smaller version, he cut down the 2.5” Snax to fit his needs.

“I cut them down and they work great,” he said. “I would imagine the smaller version is perfect for my use.”

The bigger Crappie Snax have their place, however. Don recalls a tournament situation when the bigger fish wanted the biggest bait. When he first encountered a tough bite, he downsized, only to later determine that the fish wanted a big bait.

“The big fish would chase but wouldn’t commit,” he said, “so I knew that they wanted something, just didn’t know what. I tried hair jigs all the way down to a 1/100. We tried different actions of plastics, but in the same basic size.

“With not much time left, I tied on a 1/4 oz. with a 1/0 and put the ACC Club on, and the next fish I dropped on just about ripped the rod out of my hand as did every fish afterwards. By the time we got back to the area that was holding a limit of two’s, those fish had left out.

“I don’t know what exactly the fish thought it was, but they hammered it with anger. The quality of these baits are top notch and are now a definite top three go-to in my arsenal.”

The quality and effectiveness of the ACC Crappie Jig Heads and Crappie Snax plastics rival or even exceed anything else available. 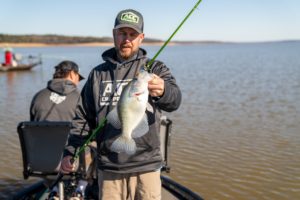 “The bait keeper barb is the best I’ve seen,” Charlie said. “Your plastics stay put, even those soft and expensive ones. An extra fish or two per jig adds up. The beefy J hook gives me the confidence to swing in 2+-pounders without fear of straightening out. The big eyes seem to help when the crappie want to get in a staring contest.”