While ice fishing is a novel concept for most crappie fishermen, the lessons learned from fishing under the ice is valuable knowledge for all.

One consideration is taking a close look at lures that appear to be specifically designed for fooling fish under the ice. While most target the ice-fishing crowd, they probably should be designated simply as lures that catch crappie or other species regardless of the state of the water. A lure designed and marketed for catching a fish under the ice in the far North will likely catch a crappie in the South.

With that in mind, we quizzed ACC Crappie Stix pro staff members who regularly ice fish about their favorite lure choices. Some mentioned a single lure while others provided multiple options dictated by fishing conditions.

Regardless if consumed by an ice-fishing veteran or an open-water angler willing to expand his lure options, the following information provides food for thought. Whether you are an ice fisherman or one who never sees water below 50 degrees, consider these 5 things about ice-fishing lures from the ACC pro staff.

1. For tough February ice fishing, Wisconsin fisherman Davis Lenzen has a go-to lure that fools a variety of panfish, a 1/32 jig adorned with a tiny Eurotackle Plankton Red plastic (.5”).

“A small tungsten jig and creature profile plastic fished over soft bottom (mud or silt) mimicking what both crappie and bluegill are feeding on this time of year is the best way I can put fish on the ice,” Davis said. “Match the hatch as some might say.”

Davis said he usually finds the fish one to five feet off the bottom in 20-30 feet of water with some of his best success recently around bridge columns. 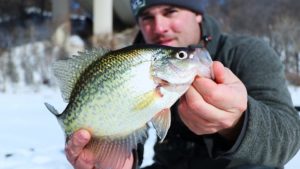 2. Illinois guide Reagan Smith (www.centralilcrappieguide.com) loves one of the industry standards for his hard-water success.

“I love using a Swedish Pimple in all different sizes,” he said. “I start with that in chartreuse glow or a gold (or) sometimes pink color.”

Using different models and sizes of the spoon line allows Reagan to target not only panfish but also bigger species like walleye or bass.

As an alternative, he opts for a Custom Jigs and Spins (www.customjigs.com) tungsten model in sizes three-five mm.

“I dead stick both or jig,” Reagan said. “There’s no in between. It’s a constant fast jig or a dead stick for me.”

Reagan said the Swedish Pimple typically shows up better on his LiveScope, but the recent Garmin update now allows him to see the jigs better as well.

3. North of the border, Canadian angler and ACC pro staffer Yan Rochon favors a jigging lure that allows him to target bigger crappie and other species. Similar to a Rapala Jigging Rap, Yan said the Jigging Minnow from Target Baits Lures (find them on Facebook) is an even better model for ice fishing.

In a generic sense, jigging minnows – noted for their minnow profile that attracts most gamefish – are produced by many companies in the U.S. and Canada. The Target Baits Lures model is Yan’s preference. 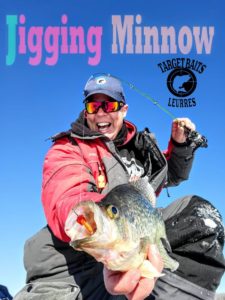 “It is similar to a Jigging Rap but better because the center treble hook at the center of this lure has a diamond under it,” said Yan, who lives in Quebec. “It makes a big difference catching the big crappie coming from under the lure. They go mad for that diamond and also the fact that the Jigging Minnow replicates a minnow. I believe it attracts the larger crappie, unlike micro jigs in the form of larvas.”

Yan said he fishes the lure in a variety of ways, at times moving from hole to hole looking for a quick reaction bite. However, for trophy fish, a slower presentation is often best.

“I work the lure in many different ways, but the key for real big crappies is to let the Jigging Minnow stand still for a few minutes by putting the rod aside,” Yan said. “Then suddenly a big female appears. At that point, I slowly pick up the rod from the holder, and I drop the jig just a little to the big girl, (which) suddenly makes her chase it. Killer strategy, I tell you, for some serious slabs on ice!”

4. Goose Gutzman has a choice to make each time he visits one of the many lakes near his home in Minnesota. Which lure to use today?

“I honestly really don’t have a favorite lure,” Goose said. “I’m constantly switching depending on how the fish are or aren’t reacting.”

Goose (follow him on Facebook for ice-fishing reports and for info about Goose’s Guide Service) does have a lineup ready for every excursion.

“Typically I always start out with a spoon jig to get the biggest fish in the school to hopefully commit,” he said. “If that’s not working, I’ll go to a tungsten jig tipped with a waxworm or a spike.”

Goose said he normally starts off with a 5 mm jig and downsizes if the fish are not responding to his liking. He said the use of LiveScope has really enhanced his ice fishing success and allows him to see just how the fish respond to a certain lure.

On some days, the fish are so aggressive that he switches to plastics like a Lucky John Baby Rockfish or BillyRub (B.R.B. Protein Infused Plastics), baits about 1 ½ inch on a 1/32 or 1/16 tungsten head.

5. Lure size is one common denominator among the pro staff members. In general, they use bigger lures to target the bigger fish in a school and then downsize to catch numbers or skittish, pressured fish.

In the ultra-clear and frigid waters of ice fishing, a tiny lure is less intimidating and more closely aligns with the natural food sources of panfish, a target for the majority of the ice-fishing crowd. The principle can likely be translated to open-water situations as well. Downsize in cold-water situations or post-front conditions when the crappie and other panfish are lethargic and don’t feed as often as at other times of the year.

Ice fishermen are a hardy lot who possess a wealth of information that applies to fishing in general. While a big jigging lure will likely never replace a standard jig, the potential for using one exists, especially in LiveScoping situations. The smaller jigs and spoons used under the ice also have their place at other times of the year.

So-called ice-fishing lures are not just for ice fishing. They are fish catchers and could potentially improve the catch of just about anyone, maybe even when ice is not even a consideration.

P.S. ACC Crappie Stix ice rods are still in stock if you’re looking to grab one for the late-ice bite!