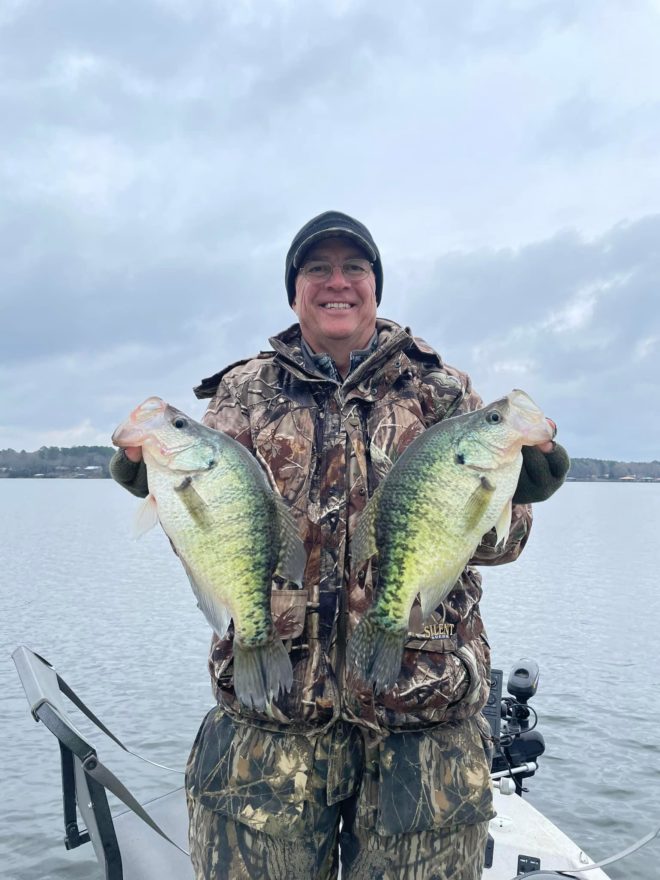 Crappie fishing in winter is different from crappie fishing at other times of the year, a bit more “challenging” in the words of ACC pro staffer and Asleep at the Reel YouTuber Chris “Sarge” Gill.

While the fish still eat daily, the feeding binges last for a shorter period. Being at the right location at the right time is critical to winter success. With the exception of areas already experiencing spawning activity, mainly Florida, and spots with crappie moving to mid-range pre-spawn depths, deeper water remains a good starting point for winter crappie fishing.

With these ideas in mind, Part II of Winter Crappie Fishing: 5 Things to Know focuses on location, depth, and other factors associated with the habitats frequented by cold-weather crappie. ACC Crappie Stix pro staff members provided most of the info.

Also check out Part I for other ideas about winter fishing.

When quizzed, most ACC Crappie Stix pro staffers suggested that winter crappie generally hold deeper than at other times of year. As always, some exceptions exist, but a good starting point is at 12-15 feet deep.

“Right now I am fishing deep water, 36 feet (deep for East Texas) and catching them 15-20 feet down on structure,” said Chris (Asleep at the Reel on YouTube). 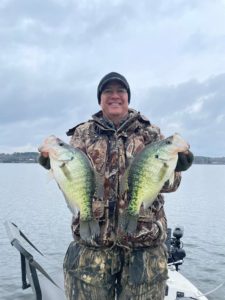 That does not mean that all crappie are deep. Many will hold on top of ledges, close to deep water but still relatively shallow. That’s where Oklahoma guide and pro staff member Don McClish (PointBreak Crappie Guide Serivce, 918.316.3363) finds them in depths ranging from 4-8 feet, especially if the water is muddy.

“However, not all the quality fish are deep,” said Fred (Full Moon Fishing Service, 618.731.1601). “We have used our boats to break ice over stakebeds in 5-6 feet of water and then proceeded to catch limits off of them.”

Anticipate and record the location

Through experience, many fishermen know where crappie will locate at different times of the year. The fish will acclimate to the same general areas in different seasons, including the coldest winter months.

But what about inexperienced crappie fishermen or someone fishing a new lake? A new ACC pro staff member, Canadian Yan Rochon, makes a suggestion that has contributed to his ice-fishing success through the years, and the practice seemingly applies to anglers who fish open water through the winter months as well.

“It’s all about finding them, where ever they are on ice and that starts late fall,” he said, “doing the homework on precise locations (and) mapping out patterns across the years will eventually pay off.” 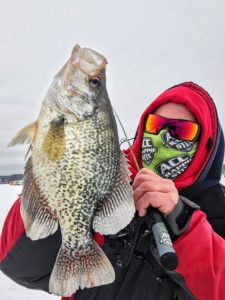 Maps, whether traditional print versions or digital ones, are of such high quality these days that recognizing good winter holding areas along depth breaks is relatively easy. Finding ideal depth ranges on maps in advance of a trip helps pinpoint fish.

Developing a quick-reference database of fishing successes, while time-consuming, also contributes to improved catches in the future. If a written journal is too old-school for your tastes, consider creating a digital one. To avoid some of the complicated online fishing journal templates or programs available online, consider something simple like a word-processing document or spreadsheet to document fishing activities.

A basic crappie fishing premise seems to especially apply in the winter: Find the bait and find the fish.

Don said that “being around the bait is key. The migration pattern of the shad dictates the migration of the crappie. In certain areas, I will fish above one- and two-mile strands of shad.”

Jeff (Southern Scales Guide Service, 205.294.9202) and I fished a cold, drizzly, windy February day, finding little success early on. Jeff, in fact, made the point that he saw very few baitfish on our first couple of stops. Only when we found areas with more bait activity did the fishing heat up. When we found the biggest concentration of shad, the biggest females were roaming in their wake.

While being around baitfish is not always an indicator of success, crappie always seems to be more active when a food source is present. 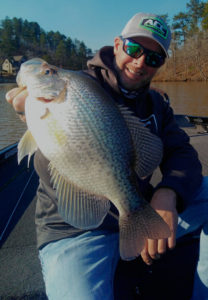 Another key to cold-weather fishing is recognizing the change from true winter mode to the pre-spawn, when feeding activity will increase. Various triggers prompt this transition and not just rising water temperatures.

Length of daylight hours is another important consideration, and even in early February, daylight is already extending more than 30 minutes compared to a month ago.

“Normally, at this time of year, they are feeding hard here in east Texas and will bite just about anything,” said Chris “Sarge” Gill. “Within the next couple of weeks a lot of them will be transitioning to the shallower water. We already have people catching them wade fishing, but the majority will come up within the next couple weeks based on prior years.” 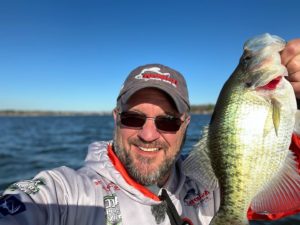 Of course, the transition is a regional thing with some northern U.S. and Canadian lakes experiencing ice through March. Regardless of the timing, crappie will make a definitive move toward spawning areas at some point in late winter or early spring.

The final point moves away from the depth and location habits of winter crappie and centers on technology. LiveScope and other forward-facing electronics have dramatically impacted crappie fishing everywhere, but an overlooked influence is LiveScope in the hands of ice fishermen.

Guide Goose Gutzman (follow his personal Facebook page for information about Goose’s Guide Service), pro staffer for ACC Crappie Stix and various other companies, has traditionally caught as many fish as anyone on the ice-covered lakes near his home in Minnesota. He said, however, LiveScope has revolutionized his approach to ice fishing just as much as it has for open-water anglers.

“With LiveScope, finding crappie is a lot easier because before I’d have to keep drilling holes through the ice until I found them,” he said. “Trust me. Some days you can drill 100 holes or more, and if you aren’t close to the school, you won’t even see them. LiveScope definitely changed Ice fishing hands down.”