Florida crappie: A ray of sunshine in a dreary winter 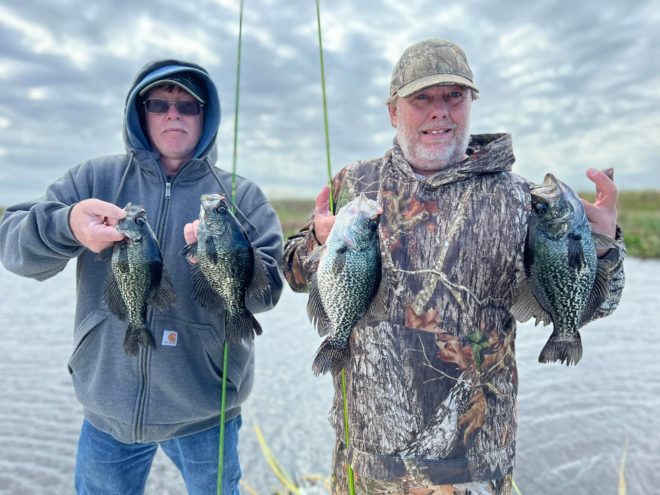 A certain segment of northern anglers await the hard water for their cold-weather crappie fix. In the Midwest, South and other regions of the country, fishermen endure the vagaries of winter conditions while attempting to put slabs in the boat.

Then there’s Florida. The Sunshine State, particularly in the central and southern parts, is an outlier when it comes to winter crappie fishing. The weather is relatively warm and stable, especially compared with the extremes experienced in other parts of the country. The spawn starts as early as late fall with peak spawning activity occurring in January and February in a normal year. Only the Panhandle area of north Florida is the exception to that timing.

The best fishing follows a south-to-north progression with the area centered around Lake Okeechobee offering consistently good fishing from November to April and beyond.

“It’s been good,” said guide and ACC Crappie Stix pro staff member Calvin King (follow either Fast Break Bait & Tackle or Calvin’s personal page on Facebook or call 863.634.2336 for trip information). “It’s been as good as it’s ever been honestly.”

Despite a relatively slow fall, the fishing on Okeechobee picked up in December and has been on fire in recent weeks. Both Calvin and fellow guide, tournament competitor and ACC pro staffer Brad Gibson (follow G3 Outfitters Brad Gibson on Facebook) have experienced the hot crappie bite.

“We’ve been dealing with a couple of things,” Calvin said. “We’ve had back-to-back fronts roll in the last week or so. We had the full moon. We just had another wave of females push in to the grass. The bite has really been hot.”

Added Brad, “The past two weeks have been really good with a lot of bigger crappie. I haven’t seen a two-pound crappie yet. We should start to see them in the next week or so on the new moon. But we’ve been catching a lot of 1.6 to 1.8 fish.” 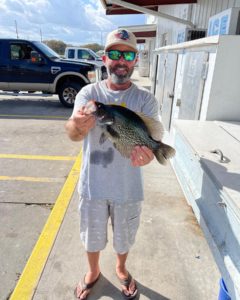 Both Calvin and Brad focus their efforts around vegetation most of the winter. They start on the outside of the reeds in water 4-6 feet deep. The males are typically in even shallower areas preparing for the spawn with the bigger females hovering on the fringes of bedding areas.

“We typically start seeing some spawners in early December,” Calvin said. “We don’t see a lot of spawning activity in November, but we do see a few. The first good wave normally comes in December. Then it will be pretty much every full moon until April.

“I typically start outside the reed lines, the buggy whips, and I have my marks that I go to every single year and know that’s a good place to start checking. The majority of my fishing is in the reed heads, the smaller reed heads.”

With the water at normal level, the pre-spawn fish will stage in 4-5 feet with spawners as shallow as a foot or slightly less, Calvin said. Find that depth range around vegetation, and the fish are likely there.

Calvin said one key recently has been the re-emergence of hyacinth, which grows in favored spawning areas but had largely disappeared for several years.

“We have an issue with them spraying the hyacinth right now,” Calvin said. “If you can find a place where the hyacinth is butted up against the reeds or cattails or even the willow trees, you can usually find the fish.”

“I’ve been catching them on the outside grass lines in the pencil reeds here in the last week,” he said in mid January, “under matted vegetation around cattails and hyacinth and around dead cattail stalks and stubble sticking up. Even some in open pockets of water around some of that vegetation.

“The last couple of days you had to be in that heavy vegetation to catch them.”

While an old-school cork-and-minnow approach has long been a go-to tactic on Okeechobee and other south Florida fisheries like the Kissimmee Chain, Lake Istokpoga, and the numerous lakes in the Lake Placid/Sebring area, both Calvin and Brad have adopted single-pole approaches.

A 10R (10’ rear seat) ACC Crappie Stix jigging pole is their rod of choice, and they typically flip a small hand-tie around the vegetation.

“I like to throw a 1/32 or a 1/16 if it’s windy or if I’m fishing some heavy grass,” said Brad, who added that a recent three-boat trip and friendly competition among friends produced 205 crappie.

Regardless of the approach or the destination, expect to find quality, healthy fish in the south-Florida region. In particular, Okeechobee has experienced a resurgence after emerging from the negative impacts of several hurricanes in recent years.

“The lake is very healthy right now despite what you might hear,” Calvin said. “It’s starting to grow a lot more hydrilla, which with the storms and the spraying, it ended up dying. The fish are very, very healthy.”

The improved water conditions and excellent fishing have not gone unnoticed. Long a destination for snowbirds from the North, Brad said expect a crowd for winter fishing.

“I’ve got a 78-year-old friend of mine, probably the best crappie fisherman on Okeechobee, along with some others that I talk to, and we think there’s more people down here jigging for crappie than there’s ever been,” Brad said. “Years ago, everybody minnow fished, and now there’s less minnow fishing and more people fishing with jigs.

“There’s definitely more pressure, causing the fish to not stay put. Used to, you could fish them for a week or 10 days and not have to worry about them moving. Now, a bunch of people roll in on the fish and a place doesn’t last for two days before they move on.”

Despite the pressure, both Calvin and Brad said the fish are fairly easily located. In the winter, the Okeechobee crappie gorge on shad and can typically be found around the schools of bait.

The fishing should only improve as the winter wanes and more stable conditions emerge in the spring.

“We will catch them in the grass until the middle or end of May,” Calvin said. “You’re always going to have your resident fish in the grass, those that will never leave. But the best fishing will continue on through the winter and into the spring.”

To the north, the crappie fishing also heats up as well. A couple of national tournament trails, Crappie USA and Crappie Masters, kick off their seasons just about every year on venues like the St. Johns River.

While guide and ACC pro staff member Jody Stephens won’t be tournament fishing, he takes advantage of the winter bite in Florida, which kicks off well ahead of the fishing he normally experiences in Georgia.

Jody has fished the St. Johns (and also Panhandle lakes like Talquin) in the past, and last year used that knowledge for an extended winter stay guiding clients in Florida. The effort was such a success that he will be headed south again soon. He normally guides for crappie, stripers, and hybrids on Lake Oconee southeast of Atlanta.

“I did it for the first time last year,” Jody said. “By the time I got back, it was so overwhelmingly popular based on the pictures that I was sending in, the phone started ringing off the hook, everybody wanting on the list for 2022. I kept adding and adding and adding, and we rented a house down there with a couple of other guys.”

Jody (Crappie Daze Guide Service, 770.656.4520 or [email protected]) said he was booked for 21 straight days through mid February. His fishing will primarily focus on Crescent, Woodruff, and Beresford lakes along the St. Johns although numerous other opportunities exist on the river, which runs for over 300 miles in north-central Florida. 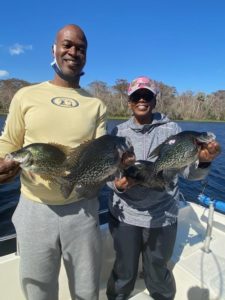 “I’ll primarily be long-line trolling,” he said. “The two rules of thumb are you can’t ‘out-shallow’ them and you can’t outrun them. I catch fish in extremely shallow water, and I’ve caught crappie at 1.8 mph turning around the boat with the big motor.”

Jody puts the ACC Crappie Stix trolling poles to work, pulling 1/48 or 1/32 jigs. His preferred trolling speed is 1.0 to 1.4 mph. The tactic produces some of the most picturesque fish found anywhere, he said. The coloring of the black crappie found in Florida is vivid year-round but particularly so around the spawn.

“The coloring of the fish, the black crappie, is more pronounced,” he said. “That dark, tannic-colored river water makes for a really beautiful fish, particularly during the spawn when they are putting on their tuxedo colors anyway. 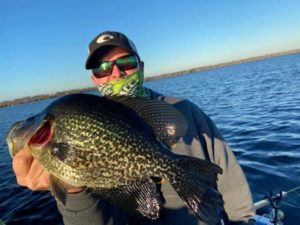 “They may not be as long as some other fish, but they get really tall and really thick. They feed primarily on grass shrimp and shad, depending on what lake you’re in. In the St. Johns, it’s primarily grass shrimp. The fish are really healthy.”

Even farther to the north in Florida, the best bite does not start at least until February with the peak of the spawn usually in March. Talquin, located near Tallahassee, is one common destination for visiting anglers in the Florida Panhandle.

“They call it the lumber yard,” Jody said. “It’s creek channels and flats, probably a LiveScopers paradise with all the stick-ups and wood. “You’re going to stay hung up a lot, but you are also going to catch a lot of fish.”

Jody said the timing of the spawn in the Panhandle more closely parallels other southern states but is still advanced compared to many parts of the country.

“On Talquin, the fish will be pre-spawn until about the end of February,” he said. “That’s still roughly a month ahead of our schedule (on Oconee).”

Getting to Florida requires some time, effort, and money for anglers outside the region. Once on the scene, however, the crappie are normally aggressive and ready to eat.

Regardless of the destination, south to Okeechobee or farther north to the St. Johns or the Panhandle, crappie fishing reaches a peak at this time of year, offering a ray of sunshine for anglers beset by the extremes of winter weather.