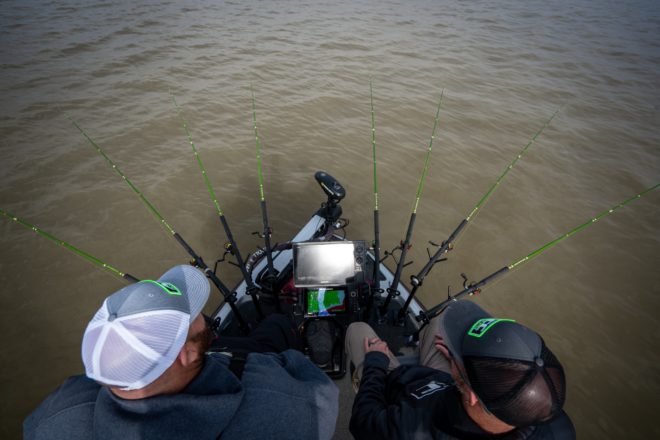 Little doubt remains that crappie fishing has changed dramatically since the introduction of Garmin’s LiveScope technology.

The forward-facing sonar completely revolutionized crappie fishing for those who chose to use it, notably at the tournament level. The potential for identifying and pursuing the biggest fish in a given pond left non-LiveScopers in the wake, and the “live” process pushed traditional tactics aside in many instances.

Over three years removed from Garmin’s introduction of the technology into the fishing world and from subsequent roll-outs of similar devices by Lowrance and Humminbird, “live” is entrenched as the go-to approach for anglers seeking big fish.

Where does that leave traditional practices? Are crappie suddenly immune to the allure of presentations that have long produced? Have they lost their productivity?

The answer is obvious. Time-honored techniques like spider-rigging maintain their time and place in the crappie culture. LiveScope tactics will likely continue to dominate tournaments, but for fun fishing, for guided trips, and for efficiently putting limits of fish in the livewell, spider-rigging remains a consistently productive approach in a continually evolving crappie world. 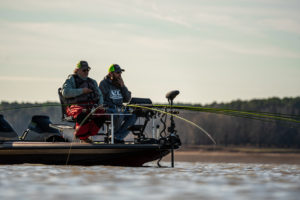 “I’m just down here (in Mississippi) doing what I do,” said guide and ACC Crappie Stix pro staffer Tim Howell (Long Branch Guide Service). “Spider-rigging definitely remains relevant for me. It’s something I’m prepared to do every day.

“I have (LiveScope) on my boat, and it’s usually turned on. But that doesn’t mean that I stare at the screen and target individual fish. There is a place for LiveScope in what I do daily, but it’s not the focus of my fishing.”

Several reasons exist for the continued relevance of crappie-catching techniques like spider-rigging. First of all, most fishermen who pay for guided trips are not as proficient as the everyday-on-the-water variety of crappie fisherman who has learned many of the subtle nuances of their preferred brand of live technology.

“It takes thousands of hours of screen time and boat time to get really proficient at LiveScope,” Tim said. “For me as a guide having trips with different people every day, you don’t really know their skill level from day to day. Every day is a new day with new people.

“You can’t really teach someone how to LiveScope in a short amount of time. The good thing about spider-rigging is you set out eight poles, and you are visibly seeing the bite. I can see the bite, and I can tell the clients which pole to grab. It just simplifies the process.”

Added Ricky Bridges, another Mississippi guide who helps Long Branch and other services with overflow trips, “The guide’s up there coaching more than people are fishing. To me, if I were going to pay for a guided trip, I would rather sit down and watch my four poles. To each his own. I would rather spider rig while guiding.”

Ricky’s comment promotes the equity of spider-rigging compared to LiveScoping, an approach where one client is usually watching rather than fishing. Tim said the very nature of spider rigging gives multiple clients the opportunity to fish all the time.

“Most times I have two people in the boat fishing for eight hours,” Tim said. “If we were LiveScoping, I would be up front with one client, and the other client would be in the back of the boat. So effectively, it eliminates part of their fishing time.

“With spider-rigging, you have both clients getting to fish the entire time. The way I see it is that both clients are paying for the trip, so they should get eight hours of fishing time versus half the time while LiveScoping.”

Weather conditions also figure into the relevance of spider rigging. While Tim acknowledges that LiveScope has reduced the number of spider-riggers on the water in recent years, those days arrive when targeting single fish with live technology is just not feasible.

“Under certain weather conditions, spider-rigging still has relevance for everyone,” he said. “On bad wind days, it’s hard to control the boat, and I would say LiveScoping is 99 percent boat control. You have to stay on top of the fish in order to catch it. Spider-rigging, you’re putting multiple baits in front of a fish, and boat control is not as paramount as it is with LiveScope. With more baits in the water, the greater the chances you have.”

That idea figures into the mindset of most people who crappie fish. While trophy hunting has increased significantly since the introduction of LiveScope, most fishermen still want fish in the livewell. They are looking for multiple bites, not just the best seven.

“For me as a guide, it’s just the easiest way to fish and the most productive,” Tim said.

Despite Tim’s and Ricky’s preference for spider-rigging, both acknowledge that LiveScope improves their overall efficiency while trolling. They blend the unique opportunities associated with LiveScope with traditional spider-rigging presentations. For example, Ricky notes that the opportunity to see the jig, usually on one of the inside poles, allows him and his clients to anticipate the bite on occasion.

For Tim, deploying LiveScope at the beginning of a trip helps him more quickly target the depth range of the crappie.

“Before when we were just starting out a day, we would set different poles at different depths to see where the fish were holding that day,” he said, “and then we would kind of fine tune. Today, I drop the LiveScope down, scan around, look for the fish, see what depth they are at, and set the poles immediately.

“With that being said, I still use LiveScope while spider-rigging on the days that weather permits. I can see a fish out there at 60 feet and take the trolling poles to the fish just like a LiveScoper can with a single pole.” 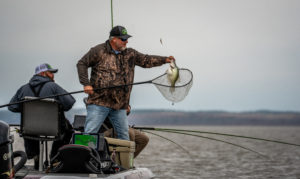 Tim also occasionally casts to the fish that he sees on LiveScope, especially those just out of range of his trolling poles. Casting helps him maintain a steady trolling course and avoid the temptation of zig-zagging toward every crappie that appears on the screen.

“LiveScope has its place, even when trolling,” Tim said. “It’s made us more efficient spider-riggers. But I’m not locked into that screen, and I’m not chasing every fish that I see. As I said earlier, it’s a complement to my fishing, not the focus.”

Despite the hoopla of live sonar generated at the tournament level, by social media, and by marketing campaigns, both Tim and Ricky said spider-rigging will likely maintain its place among a certain segment of the crappie-fishing population.

“It’s been the most dominant method of fishing on the Big 4 for as long as I can remember,” Tim said. “When I started guiding, spider rigging was king. You still see a lot of spider-riggers today. Most of the year, there’s really not much else you can do here. You can either spider-rig or you can LiveScope.

“You hear all about LiveScope, but I see plenty of spider-riggers here. The number of LiveScopers has grown, but I’m not sure that it will ever totally replace spider-rigging. From experience, I know what my clients prefer, and I don’t see that changing.”