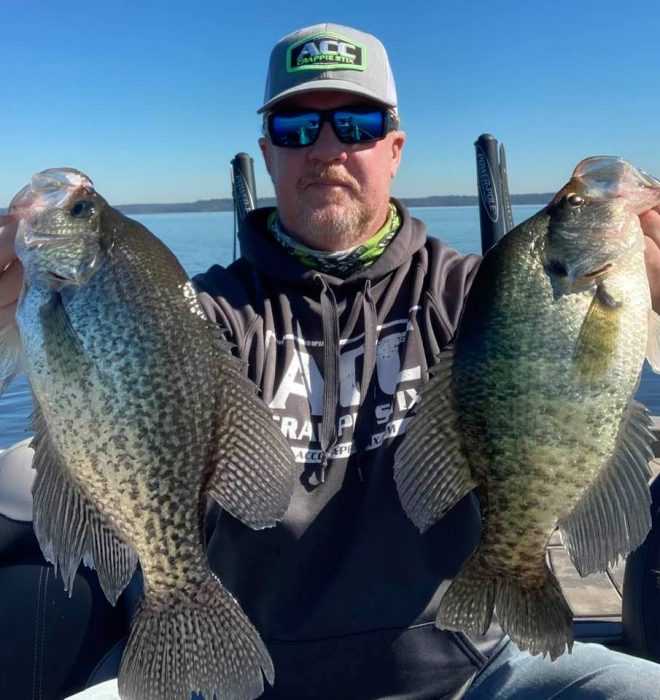 Fishing with “live” electronics over the last three-plus years has opened up a range of possibilities for crappie fishermen.

A main consideration is that many more open-water options exist than most crappie fishermen knew existed. The age-old belief that crappie are structure- or cover-oriented still holds true. Since Garmin introduced its Panoptix LiveScope in the summer of 2018, those time-honored notions have been confirmed over and over again.

However, new ideas about open-water crappie fishing have been revealed by the relatively new technology. Crappie are not found exclusively around structure or cover, and plenty of open-water fish get ignored by the average crappie fisherman. Considering the idea that open-water fish are often bigger and sometimes easier to catch makes leaving traditional targets like brushpiles, stumps, and other cover a definite consideration.

While crappie on wood cover may be easier to pinpoint, they are not always the size required by tournament anglers nor by fun fishermen who desire trophies over numbers. ACC Crappie Stix pro staff member Keith Acker and I had discussed the idea in a couple of different phone conversations, but an on-the-water experience fully illustrated the point. While Keith normally fishes lakes in Louisiana or Texas, the concept became clear as I watched him pre-fish for the ACC Crappie Stix hourly tournament on Watts Bar Lake in east Tennessee early this year.

The Tennessee River lake is full of brush, and each piece of cover seemed to be loaded with fish, almost all of the eight” to 10” variety. Just about every brushpile that Keith scanned lit up like the proverbial Christmas tree.

Just about every bigger fish that we encountered was an open-water roamer, most of them pre-spawn females, many of them high in the water column. Both of us caught crappie over two lbs. in practice, the size of fish that proved to be hourly winners in the tournament.

Keith said that his LiveScope experiences have allowed him to exploit the possibilities of pursuing bigger fish. He now expects to find bigger fish roaming, especially trophy white crappie that swim somewhat randomly either individually or in pairs.

On a trip with Alabama ACC pro staff member Jeff Jowers in late winter, I experienced the same situation. Jeff and I started by targeting standing timber and brushpiles on Lay Lake, a Coosa River impoundment in central Alabama, and plenty of fish were visible on the cover via LiveScope. They just would not bite.

Jeff finally plucked a couple of fish off brushpiles, but only when we moved to a location with less cover did we finally encounter a consistent bite. The location was along a creek channel with some standing timber. The fish were not glued to the cover, and Jeff began to intercept the bigger crappie roaming in open water not far off the timber.

Some of the fish showed up on the screen just under the surface, so shallow that Jeff at first doubted that they were crappie. Only when we got a couple of strikes lifting our lures out of the water did we realize exactly what we were looking at, fish up to two lbs and slightly more roaming extremely shallow pursuing baitfish. Some of the fish swam a foot deep with the boat positioned in 20’ of water. 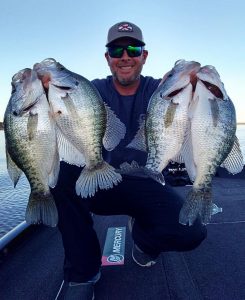 Were those two anecdotes exceptions to the norm or are they normal occurrences for skilled crappie fishermen? I put the question to members of the ACC Crappie Stix pro staff, and they responded with definitive information about open-water crappie vs. those stuck on structure/cover. The consensus is that most preferred open-water situations when that option presented itself.

Following are some of their takes:

Keith Acker (Louisiana): “Open-water fish are easier to target in my opinion. Open-water fish can see the bait easier because there are no visual obstructions. I pitch past them and keep my jig just slightly higher in the water column than the fish and bring it by them. Plus you can pitch or cast at farther distances in open water when the fish are spooky.

“You can get a lot closer to the fish in stained water, so casting to the fish is more successful for me in clear water.

“When fishing timber I try to stay at least 15’ away. When I find fish, I scan the tree to see where is the best place to put my jig to trigger a strike as well as to avoid getting hung up.”

Jeff Jowers (Alabama): “There is a difference targeting structure fish vs open-water fish. Me personally, I prefer to chase open-water fish. The reason being is that I like to cover water, and I enjoy targeting bigger fish vs eaters and/or smaller fish. Sure, you can catch good fish on structure; however, in most cases when you fish brush piles, it’s usually clones with a big one here and there.

“When fishing structure I look for isolated fish on stumps, etc. For me, the bigger fish tend to be alone or run in smaller packs and/or just be one or two holding on a stump.

“When targeting open water fish, I usually pan out up to fifty feet and sweep an area, closing in the forward range as I approach my target. If fishing a brushpile, I stay off at first about 20’ to 30’ feet and make a pitch/cast at the structure to pick off the aggressive fish. If or when they shut down and they are in deep enough water, say 18- 20, I’ll close in and vertical jig to entice a few more to take my offering. If in shallower water, that’s where the 13′ (ACC) rod plays a role. But if I had to choose, it’s single pole, open water, when or if I have that choice.”

Nick DeWolf (Louisiana): “Open-water fishing takes more understanding of how the fish is positioned or swimming, knowing how to get him to stop without spooking him. Boat control is the hardest part for most people. If you have great boat control, you will excel at open water in any condition. It’s by far my favorite. I can get the trolling motor on 80% and burn up miles of water, fishing timber not so much unless you want to replace a trolling motor.”

Goose Gutzman (Minnesota): “I got my LiveScope out last week, and we’re on some big schools in open water, no-structure basin fish. It was almost too easy.”.

Wesley Miller (Louisiana): “For open-water fish, I’m trying to figure out which way the fish is swimming. Once I figure this out, I pitch my jig far enough out in front of the fish so that I can lower it down just in front of his nose. When I see the fish react on the screen, I hold my jig dead still and wait for a strike. If the fish doesn’t see my jig, I pull it immediately out of the water and try again. 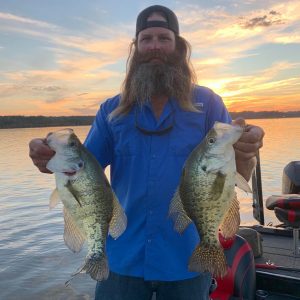 Kennieth Pierce (Texas): “The way I open-water fish depends on the fishes’ mood. If they let me approach within 10’, I’ll drop it vertically on their nose. In situations where they are finicky, I do like most and pitch past the fish, letting my bait swim within inches over their head.

“Structure fish are very similar and less likely to spook with a slow approach. If I find my bigger fish swim off the cover when I approach, I’ll then stop the boat at least 25 foot or farther and pitch at them. Before I leave the pile, I’ll approach again within 10 ft and vertically jig.”

Don McClish (Oklahoma): “My opinion, chasing open-water crappie is much easier. For one, you can fish fast, and usually there is a higher concentration of fish in an area, and when they hit that stage, it seems like the bite is more consistent.

“When fishing structure there’s a lot of factors to figure in, and boat control comes into play more so than in open water. Fishing standing timber or laydowns, you have to know what to look for, or you’ll overlook a lot of fish. Inexperienced LiveScopers usually are just looking for that definite image, and that’s not always the case.”

Tim Howell (MIssissippi): “I’m an open-water guy here in Mississippi. My approach is probably a little different than most. I’m almost always spider rigging with clients and fishing open water. I will cast at a fish out past the trolling poles on occasion and catch that fish or have that fish chase my bait back towards the trolling poles, where in most cases, it will eat one of those baits. I will also take the trolling poles to a fish using the LiveScope. It’s a very effective method as well.” 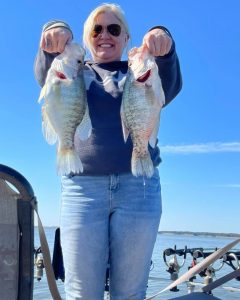 Charlie Burrow (Louisiana): “Open-water crappie, aka Free Range Chickens, make me feel like Lysol on a germ. I’m gonna get 99.9% of them. Also,more times than not, the fish will be approaching my boat, so depending on his speed and depth, time is crucial! I compare it to leading a duck before you pull the trigger. The guys that know their equipment by feel as well as by sight (because of the hours of practice) can take a quick glance, pitch, and with eyes on the LS, transform their jig into a lazer-guided missile and drop it on a crappie’s nose! 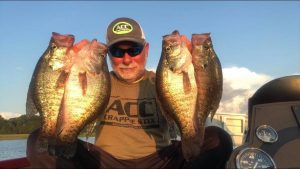 “Timber fish tend to need a little more convincing at times. One to three fish on pole timber often react like a chicken and are usually eager to bite and are normally bigger fish. Large groups of crappie on large trees or brushpiles will normally be a majority of smaller fish and can be extremely picky about jig choice. But spend a little time to crack the code, and it doesn’t take long to fill the cooler! Free Range Chickens or Timber Fish? It’s all good.”