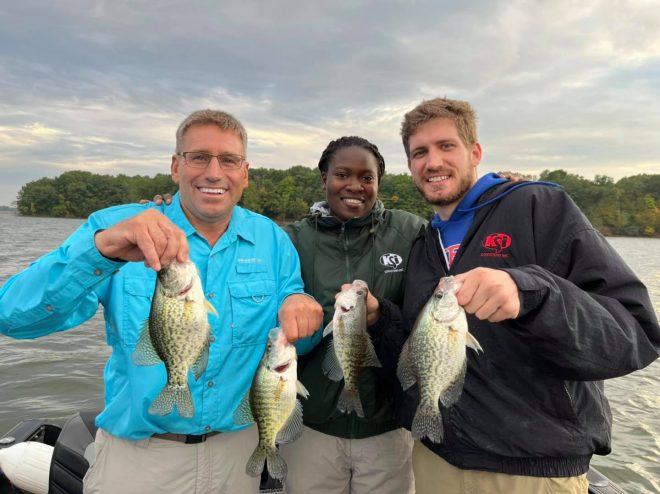 The fall crappie bite continues to ignite across the country. The timing varies from region to region, but if the fall transition hasn’t started in certain locales, then one of the most consistent periods of crappie fishing of the year lurks just around the corner.

Last week in Part 1 of this series, we talked about fall crappie fishing with two ACC Crappie Stix pro staff members from different parts of the country, Ralph Reevey, Jr. from New Jersey and Nick Whitten from Florida. For Part 2, we pick another state with a large crappie fishing population.

Pro staffers Reagan Smith and Fred Mooney and ACC Chief Marketing Officer Mitch Fese provide the details about what to expect this fall in Illinois, which is also home to ACC Crappie Stix. The fall window is much the same for all three fishermen although warm temperatures have delayed that bite to a certain extent this year. Waves of cold air will soon drop water temps, however, and trigger improved fishing.

All three fishermen are focused on different lakes with Reagan’s home waters separated from the other two by about 200 miles. Fred primarily guides on Rend Lake, and Mitch frequently fishes Lake of Egypt.

Typical fall fishing finds Reagan locating crappie around docks on Springfield and around the wood structure on Clinton.

“Most of the fishing is concentrated on docks and on bridge pylons on Clinton,” he said. “For me, it’s docks more than anything else. The fish are probably six to nine feet for me, maybe a little shallower in the morning and a little deeper later.” 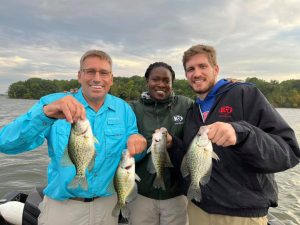 Clinton, which is heavily developed, is full of docks suitable for shooting. Reagan favors the 6’6” ACC casting/dock shooting rod, which he uses to throw 1/16th jigs paired with Charlie Brewer’s Sliders. He also uses Bonehead Stump Bugs and Tophat Jigs.

“It’s mostly dock shooting for me,” Reagan said. “That’s what I love to do. If I’m not dock shooting, I’m flipping a bobber and jig fairly shallow right under a dock float. That’s pretty much how I will be fishing all fall, dock, dock, dock.”

Clinton lacks the docks that dominate Springfield, and Reagan pinpoints the crappie that hold on wood structure and brush there. A favorite technique is dropshooting with a minnow. Reagan uses the 7’6” ACC rod for casting and the 10’ jigging pole for dropshotting.

While not specifically related to fall fishing, blacknose crappie are a unique feature of the Illinois lakes that Reagan frequents. He said the blacknose congregate in tight schools are typically bigger than the other crappie found in his home lakes.

Regardless of the type, Reagan said the coming weeks provide some of the hottest action of the year.

“In the fall, they are putting on the feedbags, pretty much munching on everything,” he said.

“Right now, fall has not arrived,” he said. “Fall arrives on our lakes when we have nights below 50 degrees, and the water temperature gets down into the 60s. It seems once the water hits 65 degrees that the bite gets a lot better. They start relating to the structure better.

Fred finds his Rend Lake fall fish in depths of 3’ to 9’. He looks for ledges and drops with some type of wood structure on them. 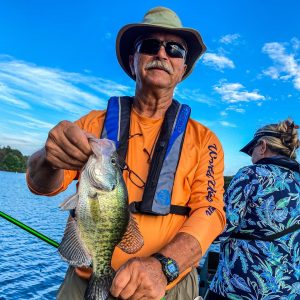 “If you get all that package together, that’s where the fish will be,” he said.

Primarily a spider rigger in the past, Fred said he has improved as a crappie guide with the addition of LiveScope in recent years. That’s how he locates his fish just about year-round now.

“I was a spider-rigging machine,” he said. “That’s all I did. With LiveScope, we realize how much more accurate and how much more efficient we can be. My spider rigging poles have not left the shelf this year. I’m still using slippy corks, still using the vertical jig. But it’s all about the single pole now.”

Fred personally prefers the 12’ ACC crossover grip jigging pole for his fishing, but uses both 12’ and  13’ models with clients to help create separation of the lines and make them more distinct on LiveScope. Fred uses Slime line and catches most of his fish on ATX Lures products or ProBuilt Jigs

He flips to shallow crappie to avoid scaring them and fishes vertically when he finds fish deeper.

Fred said the bite extends well beyond the fall.

“I might find them at 10 or 12’ as the water temperature drops,” he said. “It’s really pretty much the same from now until March.”

In extreme southern Illinois, Mitch expects to find improved fishing in the weeks ahead on Lake of Egypt.

Mitch enjoys the fall bite for a variety of reasons, a key one being that the fish become much more aggressive, perhaps due to the fact that pressure on the busy lake has slowed from peak usage earlier in the year.

“Lake of Egypt has heavy boat traffic in spring/summer,” he said. “Also once the traffic dies down in the fall, I believe the fish are less spooked and are more aggressive. I fished last week, and the bite was aggressive, but those fish didn’t have full bellies so it’s just starting to turn on.” 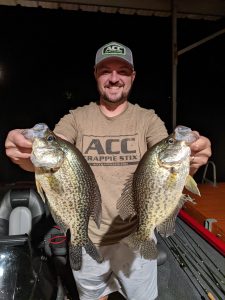 “Crappie will really start to bunch up to structure on the main lake channels as the water temp falls,” Mitch said.

Recently, Mitch found the crappie biting on the structure. To avoid spooking fish in the lake’s clear waters, he set up 15 to 20 feet off the fish and pitched a jig or used a slip-cork rig. In general, Mitch said the black crappie on Egypt are “pretty finicky at times.”

“The strategy that worked last week was that jig/minnow had to be moving at all times,” he said. “Pitch the jig out and control that natural fall, almost gliding it across the top of them back to the boat. Once the jig stopped moving, those fish would check it out but swim off almost every time. Pitch and repeat until you trigger a bite.”

Mitch prefers the 12’ and 13’ supergrip crossover ACC Crappie Stix models for pitching a jig and the 8’ rods for deploying the slip-cork set-up.

Typically, he pitches a 1/32nd hair jig (https://www.gettinjiggyjigs.com/p/winter-shad/) in a shad pattern. Under the slip cork, he ties the new 1/32nd ACC jig head and tips it with a minnow.

Mitch said the combination of a less-stressed lake and an improved crappie bite makes for one of the best times of the year for fishing Lake of Egypt.

“Take advantage while most outdoorsmen are out in the woods,” he said.

The reduced traffic is just one advantage of fall fishing for crappie in Illinois and across the country. With the peacefulness of a lonely lake and a hot crappie bite, be prepared for some of the best fishing of the year. The fall bite is just ahead for most of the country.