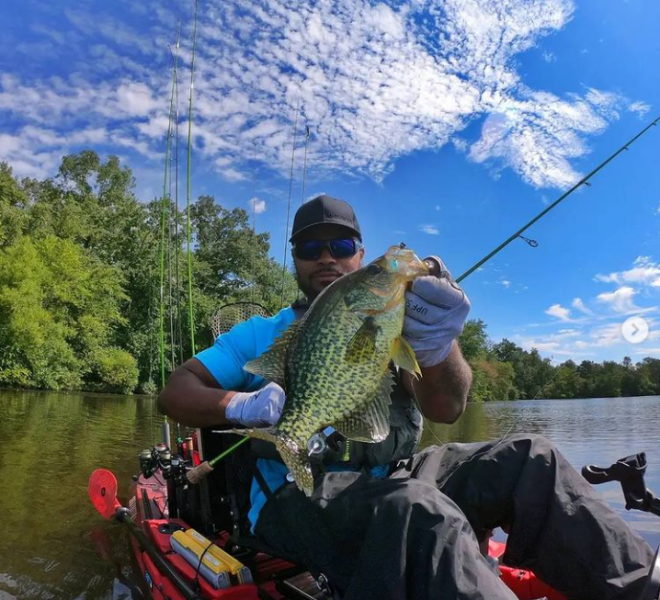 Even those crappie anglers within the same states experience a variety of situations unique to their area. For those in the northern states, the fall transition has normally reached an advanced state by this point while anglers in the South may still be fishing late-summer/early-fall patterns in October and even early November.

Then there’s Florida, which offers some unique fall fishing with crappie already staging for the spawn in the central and southern portions of the state.

I reached out to various members of the ACC Crappie Stix pro staff about their fall fishing experiences, and typically they responded with excellent ideas about what defines fall crappie fishing, about crappie habits at this time of year, and about the various presentations that work best on their home waters.

Without exception, they pointed out the quality of the fall bite compared to other peak times of the year, noting that the period from late September until mid-December (a general time frame that varies from region to region) produces perhaps the most consistent bite of the year.

In normal fall fishing, the fish are easy to pattern and are much more forgiving than the lethargic fish of summer or winter.

Veteran Illinois guide Fred Mooney said that one way to define fall fishing is based on the behavior of the crappie.

“The fish will leave the structure and come to you once that transition has occurred,” he said. “You don’t have to be as pinpoint accurate in placing your lure. They become much more aggressive.”

Unfortunately, Fred and other ACC pro staffers are experiencing warmer-than-usual weather, and the true fall transition is only starting to occur, even in the northern states.

“Right now when using LiveScope, I’m putting that minnow right on their head just to get a response out of them. Once the transition occurs, you can be within 10 feet of them, and they will come get it. The fish will come off that stump and eat your jig.They will be a lot more aggressive.”

Here’s the first of a two-part series about fall crappie fishing featuring the expertise of ACC pro staff members. The geographical extremes of the two states, New Jersey and Florida, illustrate the variety experienced in the fall by crappie fishermen. In Part II, expect more about Illinois fall crappie with Fred Mooney and Reagan Smith on the blog in a few days.

Yes, the name of the state is accurate even though New Jersey is not the first destination that comes to mind when seeking out prime crappie country. That idea does not stop ACC pro staff member Ralph Reevey Jr. from pulling in quality crappie.

Ralph primarily fishes from his Vibe Shearwater 125 kayak on the small lakes and rivers near his home in southern New Jersey. He specifically mentioned the Cooper River, Greenwich Lake, and Merrill Creek Reservoir as the three fisheries where he pursues Jersey slabs.

Ralph (find him as Chief Crappie Raider on YouTube, Instagram, Facebook, and TikTok) said the year has been unseasonably warm in his region with water temps still near 70 in early October. The fall migration has begun, however.

“I’m starting to see some crappie migrating to the deeper weedlines,” he said. “A lot of the crappie are still shallow. They like to hang out there. There is still a lot of shad activity there in the shallow part of the places that I fish.” 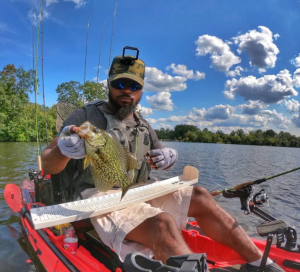 Ralph said he starts a typical fall trip in shallow water and works progressively deeper. The crappie will move out to depths of 15 feet and beyond once the water temps dip below 60 degrees, a situation that normally occurs in late October or early November. The bite is consistently good until winter sets in.

“The fall bite is definitely aggressive,” he said. “The fish know that the water is going to get colder, and they want to fatten up before it gets too cold. So they really put on a feeding frenzy, and the fish really get after the shad. They are in a feeding mood most of the fall until it gets really cold.”

He normally fishes with a 7’6” ACC Crappie Stix rod, occasionally using the 8’ model.

“The B-Vibe 2” swimbait has a thin profile but a great action,” Ralph said.

“The lipless crankbait has a nice vibration, which is huge. Crappie are sight feeders, but sometimes pure sight just won’t do it, and the fish respond to the vibration.”

The spoon provides a change-up, offering a slower fall rate depending on the model. Ralph said the flash of the spoon is an added bonus on a sunny fall day.

For his home waters, Ralph said current and the presence of baitfish are two keys that he looks for in locating crappie, factors that translate to other parts of the country as well.

“Pay attention to what’s happening on a body of water,” he said. “Look for shad surfacing or you might see them on the sonar.”

Fishing until the weather gets too cold to hazard a trip in a kayak, Ralph said he encounters an aggressive bite until some point in December. He added that southern New Jersey waters rarely ice over although that’s not the case with other fisheries farther to the north.

“The fish will be lethargic but keep biting,” he said. “When the water gets colder, you sometimes have to downsize your bait.”

In addition to ACC Crappie Stix and Eurotackle, other sponsors/products that help Ralph produce fish include Stealth rod holders and Amphibia Eyegear (he likes the Eclipse model because they float).

The crappie calendar is much different in central and south Florida, however.

“In my opinion, the fish go shallow a lot sooner than people normally think,” said tournament angler and ACC pro staff member Nick Whitten. “They are already hitting the grass in the Kissimmee Chain and on Okeechobee right now.

“Most people don’t start fishing hard down here until ‘spring time’ — December or January —  because that’s when most of the spawn actually happens. What they don’t know is they are missing out on the best time of the year to fish.” 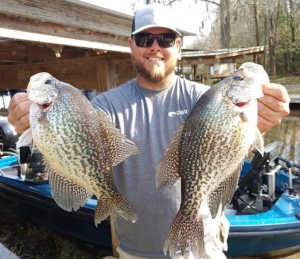 “(On those types of lakes), we get a drastic change,” he said. “Those fish have deep water to transition from. On the rivers and lakes in the Panhandle and others in north Florida, the fish will stage up out deep on creek bends and places like that, and they won’t go shallower until January through even March and April.”

Nick lives in central Florida, and the crappie are already staging for the spawn on the lakes near there and to the south.

“The lakes are so shallow, we don’t have that big transition,” he said. “The deepest grass is in about six feet of water, and the deepest part of the lake is maybe 10 feet. There’s not a big water temperature change until we get cold fronts.

Nick said water temps don’t get down into the 60s in central and south Florida until December or January, at which point the full-fledged spawn will occur.

Until then, “I believe you could catch fish with roe in them right now,” Nick said. “You really start to catch fish getting ready to spawn by about Thanksgiving.

“I actually watched a guy live on TikTok this morning, and he was catching fish on the outside of what we call Kissimmee grass. They will start there because it’s (the grass) found in the deepest water.”

For his fall pre-spawn fish, Nick looks beyond the outside grass beds and follows the fish through lily pad fields and into the bullrushes.

“Everybody has his own opinion. Some people like to fish lily pads, but I look for bullrush,” he said. “On the Kissimmee Chain and really just about anywhere in Florida, bullrush is going to be found on a hard, sandy bottom. That’s what those fish look for to lay their eggs and spawn.

“Most of those fish in the pads are in a transition stage and not necessarily spawning because 9 out of 10 times, those pads have mud under them.” 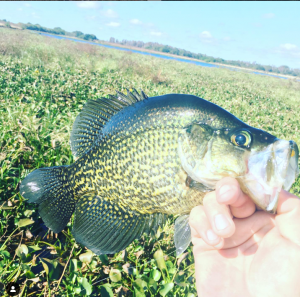 Nick said the fish feed aggressively and will hit a variety of presentations. Most people use minnows in Florida, but Nick sticks strictly with lures.

“The bite is very aggressive,” he said. “When you drop a jig in the water, you’re going to get bit. A lot of people here fish with minnows. They “dibble in the grass’ or ‘dibble in the pads,’ and that’s probably the best way to catch them.

“I haven’t bought a minnow in three or four years. I love to single-pole jig fish. Since the invention of LiveScope, I’ve been fishing for the bigger fish on the outside edges of the grass, big females looking to move in to spawn. Pre-LiveScope, I’m getting in the grass and just hitting every spot that I can until I find a concentration of fish.”

Nick employs the 13’ ACC jigging pole, which he said allows him to cover a wide circle and promotes a more stealthy approach. He catches the majority of his fish on a Fearless Jigs (by Zac Church) grass shrimp model. Other products that lead to fishing success for Nick include K9 line, Crappie Monster baits, Skinny Water Marine lithium batteries, Garmin LiveScope and Micro Draft Skiffs.

Fall fishing has features both unique to certain fisheries and common to many others. Among the most common is a hot crappie bite, perhaps the most consistently good of the year, regardless of what fall fishing means in that location.

Experience fall fishing in your area now. The window may close fast or it may extend to the new year. Either way, the opportunity to catch a pile of slabs is available.