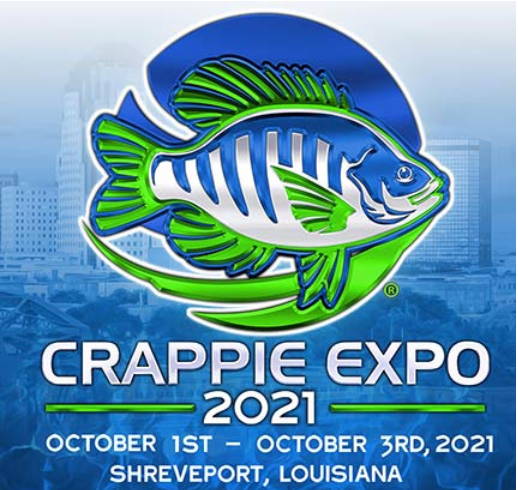 Wally Marshall ranks as one of the iconic figures in the crappie community.

Serving as an ambassador for the sport and promoting the nickname and the brand Mr. Crappie, Wally has developed a lengthy resume that includes tournament competition, product development, and marketing all things crappie fishing. About five years ago, he recognized a void in the crappie-fishing culture and vowed to do something about it.

Unlike bass fishing and annual events like the Bassmaster Classic, the crappie industry lacked a signature national showcase to promote fishing and the companies that support and benefit from it. Fast forward to the present, and the void has closed thanks to Wally’s efforts.

The third annual Mr. Crappie Classic and Crappie Expo will be held in Shreveport, LA, the tournament (Sept. 30-Oct. 2) played out on the Red River and the Expo (Oct. 1-3) at the Shreveport Convention Center. Hot Springs, AR, and nearby Lake Hamilton hosted the first event in 2019 with the second tournament and expo held in Branson, MO/Table Rock Lake last year.

“Actually it was a dream of mine about five or six years ago,” Wally said in a recent phone interview. “I wanted to create something where people in the crappie industry could meet the end user, their customers. They get to showcase their products, especially their new products for 2022. The customers get an advance look at what’s available next year for crappie fishermen.”

The tournament, which features about 100 of the best crappie-fishing teams in the country, boasts a total purse of $250,000 with the winners claiming the $100,000 top prize, billed as the richest in the sport.

Wally predicted first-day weights will likely approach a two-lb. average for a seven-fish limit. He said the river is in great shape despite the waves of weather systems that have impacted the region in recent weeks.

One twist for the tournament is the inclusion of some recognizable names from the bass-fishing world. Among others, bass fishing legends Shaw Grigsby and Paul Elias will be among the field of 104 teams. Major sponsors for the event were allowed to invite members of their pro staffs to fish, and Wally said that’s why the bass fishermen will be included among the competitors.

“When it’s all said and done, a fish is a fish is a fish,” Wally said. “They can probably catch crappie, but they will face some heavy competition from the crappie-fishing world.”

A few locals have advanced to the tournament via qualifiers, but Wally said the venue creates a level playing field for all teams.

“I like to pick destinations that have never been fished that much by tournament trails,” Wally said. “It gives everyone an equal opportunity to win. There hasn’t been a crappie tournament on that lake or river in 10 or 12 years.

“I don’t think any one team is more favored to win over others.”

Aside from the tournament competition, Wally said to expect some new and innovative products at the Expo. Perhaps the most anticipated debut is Humminbird’s latest innovation in forward-facing sonar, a unit developed to rival Garmin’s LiveScope and Lowrance’s similar technology.

“Crappie fanatics who come to the Crappie Expo get to see what’s new in the crappie world under one roof,” Wally said. “One thing is the Hummingbird MEGA Live at the Humminbird/MinnKota booth.

In addition to the products, a couple of events highlight the Expo. The World’s Largest Fish Fry will be held again, this time on Saturday, Oct. 2, starting at 11 a.m. Drawings for $10,000 cash prizes will be held Saturday and Sunday of the Expo.

Even though the third edition of the Mr. Crappie Classic and Crappie Expo has yet to be held, Wally said the business of promoting crappie fishing is a never-ending proposition. Destinations for the next three years have already been finalized although Wally has not revealed the locations. The venue for the 2022 event will be announced immediately after the tournament winner is crowned.

When asked if the 2022 tournament and expo would remain in the South, Wally quipped, “We’re going to stay in the United States.”

For full details about the Mr. Crappie Classic and the Crappie Expo 2021, sponsors, and event schedules, visit www.crappieexpo.com