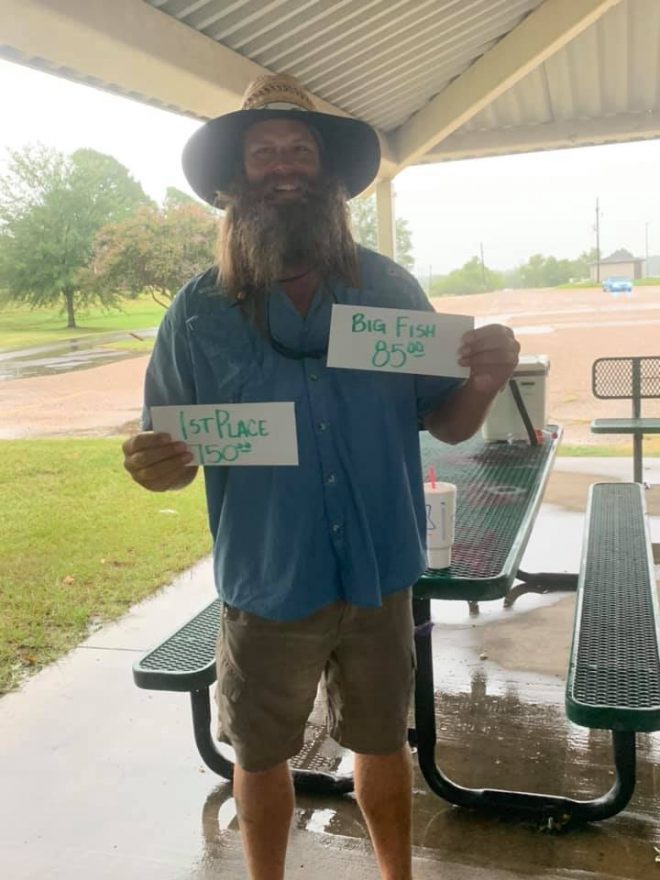 Even limited experience on the Ouachita River did little to prevent Wesley Miller, also known as Big Sasquatch Outdoors, from catching a mega-summer bag in the North Louisiana Crappie Trail regular-season finale.

An ACC pro staff member from Doyline, LA, Wesley guides regularly on the diverse fisheries in the northwest part of the state. For various reasons, he has not ventured east that much to the Ouachita, which starts in Arkansas and flows into northern Louisiana near Monroe.

His lack of experience didn’t prevent him from finding the winning combination of fish Saturday (Aug. 14), however. He filtered through limited numbers but brought seven crappie to the scales that weighed 13.30 and topped the tournament field. His winning total was anchored by the big fish of the event, a summer giant that weighed 2.54, and another that weighed 2.45.

The win also helped him secure Angler of the Year honors on the highly competitive circuit.

“I went over there last summer just looking for something to do,” Wesley said, “a day or two of looking around.

“Last week, I went with a friend of mine. He’s a great crappie fisherman who lives over there. We went into all the lakes, the D’Arbonne Bayou, just everywhere we could look for fish and never really found anything. I got to talking to people and they told me that they might just be in the river.”

Wesley called on home-water experience – he lives and fishes on the Dorcheat Bayou – and targeted fish in similar spots on the Ouachita.

“The day before the tournament I went over there and spent the whole day in the river and found two or three little stretches where the crappie were holding, not necessarily in brush tops, but in relation to brush tops in the main river,” Wesley said.

He later added, “I fell back on some of my experiences (near home on Dorcheat). It’s a very small river, nothing like the Ouachita. I look for current breaks and eddies. Where the river bends, it’s going to end up having an eddy somewhere around the back side of the bend.

“So I looked for places like that they might have a tree falling down in them or at least some type of cover. I would drop the LiveScope and scan through there. If I found them, fine, and if not, I just moved on to the next spot.”

Even with a definite game plan in mind, the fishing still proved difficult. The pattern proved true, however, and the tournament-quality fish eventually appeared on the screen.

“I worked through those stretches with LiveScope,” Wesley said. “They might not necessarily be in the top. They might be 15 or 20 or 30 feet off the top, just swimming in the main river.”

A jig of his own make proved to be the winning ticket for Wesley.

“Every one of them that I dropped my little hand-tied jig on swam up there and ate it like they’d never even seen a jig before,” Wesley said. “They came up there and hammered it.”

Wesley follows a less-is-more philosophy with his jigs, which are a small-profile make about 1 1/2” long. A unique twist is the use of feathers rather than hair for the tail, which Wesley said better resembles the tail fin of a baitfish. The winning jig version was gray and chartreuse with red and silver flash.

“It’s a small, simple jig,” Wesley said. “They don’t look like much but they catch fish.”

“These are also the rods that I use every day in my guide service,” he said. “I bought four and those same four rods have caught thousands of crappie. It’s a great rod, balanced well.

Even with the right combination of tackle, Wesley said he didn’t fill his limit until late morning.

“I caught maybe 15 fish all day,” he said. “I knew that I was on the right fish and knew what it was going to take to win. It was just a matter of finding the right seven fish.”

The win boosted Wesley to the top of the trail’s Angler of the Year standings after he entered the tournament one point down. The previous leaders finished in third place in the Ouachita tournament and ended up one point behind Wesley in the standings. Wesley fished solo at Ouachita because regular tournament partner Justin Smart had to work.

The win capped off a successful year for Wesley, who moved to full-time status with his guide business, which is aptly named. Take one look at a picture of Wesley, and the name Big Sasquatch Outdoors rings true.

He said he also gets odd looks when he tells people he has been a nurse for 22 years. Despite guiding full time this year, he retains a part-time nursing job.

“Yeah, I get a lot of surprised looks when I tell them I’m a nurse,” he said. “Right now, I’m trying to guide full time, and it’s going well.”

In addition to ACC Crappie Stix, another sponsor for Wesley is Blazer Services, a local construction company.