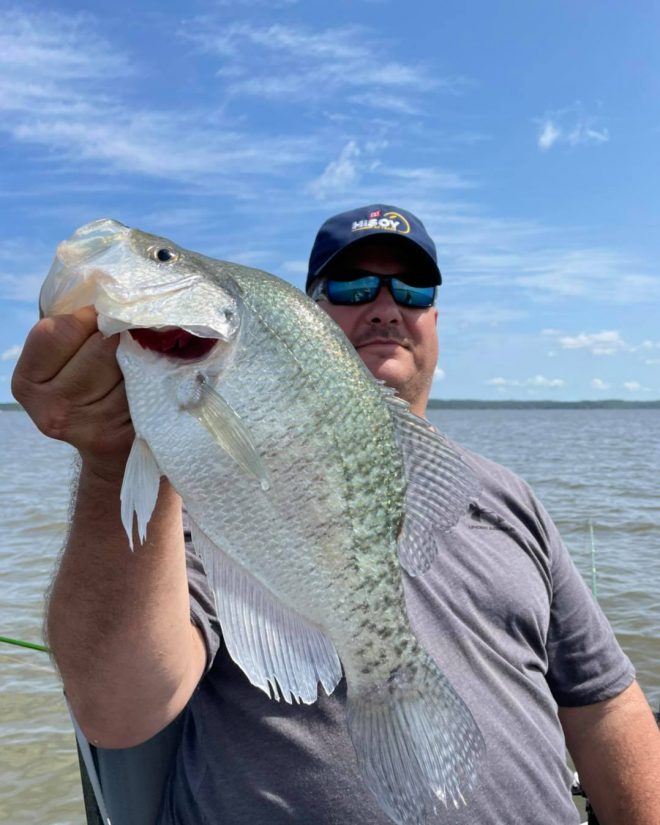 As fishermen, we often let those ideas, frequently dictated by history or by limited experience and knowledge, impact our approach to a day’s fishing. That thought might be particularly true for the casual crappie angler considering a trip in the summer.

In planning for such a trip, inexperienced fishermen probably have initial thoughts that range from the skeptical: “crappie only bite well in the spring” to the uneducated: “all crappie are deep in the summer.”

That last idea is one that I addressed with members of the ACC Crappie Stix pro staff, and their responses ran contrary to the notion that summer crappie always head to deeper water in the hottest months of the year. Their responses indicated that one of the major fallacies in fishing is that crappie are always deep in the summer.

In fact, more pro staffers responded with ideas about shallow-water fishing than those who regularly catch deeper fish. Several reasons exist for the potential of a good summer bite in moderate depths.

First of all, habitat dictates at times that the fish are shallow. At least a few lakes don’t have deep water. But even those crappie on fisheries with deep-water access often acclimate to the conditions in the shallows during the summer. A third consideration is the thermocline, which establishes as early as late spring on some lakes and forces fish to live above the thermocline layer.

“My primary lake is Lake Washington (in Mississippi),” said pro staff member Mark Hamberlin. “I have been catching them 5 feet deep in open water since February. They change (depth) to adjust to temperature but stay around the 5-foot mark.”

Washington is renowned for its shallow fishing, and the crappie there don’t seem to care if the water is 50 degrees in the winter or 90 degrees in the summer. Mark experiences success in shallow water on other venues as well.

“My next-favorite lake is Grand Lake in Arkansas,” he said. “You can catch them year round single-poling the docks and brush piles anywhere from 3- to 6-feet deep.”

Who knew crappie could be caught in the summer in just a few feet of water? Apparently, a variety of the members of the ACC pro staff.

“The small city lake I fish doesn’t see a thermocline,” said popular Texas angler Kennieth Pierce (Hook City TV on Facebook and YouTube). “We just caught fish yesterday under docks in 5- to 8-feet of water. They were there in good numbers. Water temps were 85 degrees in the morning and came up to 88 by the middle of the day.” 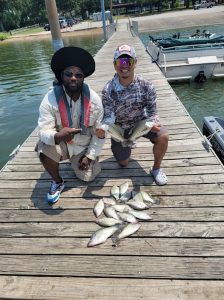 Other pro staff members, whether in the South or in other parts of the country, experience similar shallow-water success.

“I love the heat of summer in central Ohio,” said Troy Becker. “In the heat of the day in 2 deeper lakes, I can consistently catch quality slabs in 3- to 6-feet of water cruising the shallow flats gorging on small shad and shore minnows.”

He recently caught fish in 81-degree water at depths of 2 to 7 feet in a large river system, most of them on Road Runner heads and 2.3 Big Joshy swimbaits.

“This pattern has been consistent for over 35 years for me,” Troy said.

On deeper lakes, many anglers find fish stacked up in mid-depth ranges, often because of  the thermocline, which is the layer between hotter surface water and cooler, deeper water. The thermocline establishes at varying depths from around 10 feet to over 20 in some freshwater lakes.

The area above the thermocline offers better living conditions for all fish, mainly dissolved oxygen, which disappears below the layer. In general, fish can’t tolerate the area below the thermocline, which displays as a distinct layer on some electronics or as a hazy, intermittent line on others.

Oklahoma guide Don McClish recognizes when the phenomenon sets up on his area lakes, and he fishes around the conditions created by the thermocline..

“I’m naturally a shallow-water seeker year round,” he said, “but on Eufaula, when the thermocline hits, I work the flats near the channel at the point that the thermo disappears. Before LiveScope, when the water temps would hit 90 to 100, I’d tell the guys that were struggling, ‘if you’re fishing deeper than 8 feet, you ain’t catching nothing’ and would get laughed at. Now, everyone is a fan of the shallow water. My opinion is that the water quality is better.”

“I’ll also add if when fishing shallow water, watch your water temp,” he said. “If you notice a degree or 2 drop in temp, key in on that area. I relate that to when you’re wading around in the lake, and you hit those cool pockets. That’s why I feel the body temp of each fish I catch any time of the year. It tells me a lot of what’s happening below the surface temp reading.” 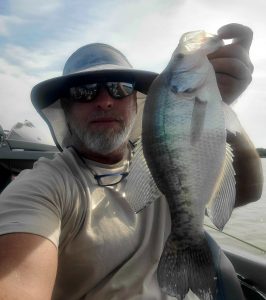 Mississippi guide and pro staff member Tim Howell experiences the variety of the thermocline on the 3 main lakes he fishes, Grenada, Enid, and Sardis. Local knowledge proves valuable for Tim in quickly targeting fish for clients, but it also creates better opportunities for the occasional summer crappie fisherman as well.

“In Enid, the thermocline is pretty much 22 feet deep over most of the lake. Same deal. Fish stacked just above it.” 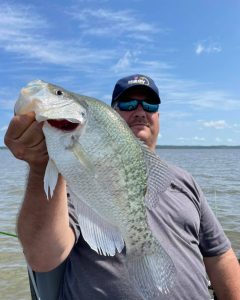 Just to suggest that fish can be caught in a variety of depths on the same day on the same lake, Kennieth said he also found fish stacked up on a brushpile at about 15 feet deep on the same trip when he also caught shallow fish.

As Kennieth experienced, some lakes offer the opportunity to catch both shallow crappie and others holding as deep as possible. On other fisheries, crappie orient either shallow or deep, even in the same region.

“For me, it depends on what river/reservoir I’m fishing,” said Alabama tournament competitor and guide Jeff Jowers. “For instance, on the Coosa in the dog days of summer, I find most fish to be in 15- to 20-feet of water on brush and/or standing timber. The bite can get slow and require you to move and find active schools.

“On the other hand, when I fish a muddy-to-stained body of water like the Tombigbee (in west Alabama), I find those fish to be in 8- to 12-feet of water. With that being said, the Coosa is dominated by black crappie that like a clearer-water environment, which makes them relate to deeper structure. That’s where the thermocline will be.

“The white crappie (on the Tombigbee) seem to prefer the muddy-water environment. The hotter the better when targeting these fish.”

Even on ultra-deep lakes like Fork in Texas, the crappie will hold at different depths from year to year. Guide Jacky Wiggins said the weather has been moderate by Texas standards, and the fish have been suspended shallower than normal.

“Fork and some Texas lakes like Texoma fish much different,” Jacky said. “Texoma fishes less than 10 feet deep in the summer, and Fork is fishing shallow this year as well. Some guides are fishing 6 to 9 feet with success.

All conditions are relative, of course, but some of those same fish will be 40 feet deep over 60 feet of water in the fall. 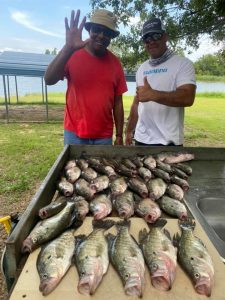 Far from Texas, Minnesota fisherman Goose Gutzman normally finds deeper fish by this time of year, but with water temperatures still in the 70s, Goose is catching shallower crappie around weeds rather than those that normally suspend over deep water.

“The majority of the crappie I’ve been catching are in 10- to 15-feet of water in the thick cabbage weeds,” Goose said. “On my deeper lakes, the crappie are on the deep weedlines, preferably adjacent to deep water. These weedlines are 11 feet to 16 feet. I check out the deep water but have yet to find them suspended over deep water, at least not schooled up yet there.”

From personal experience, I see crappie caught at all levels of the water column in various Alabama lakes and rivers. Pickwick, for example, generally features fish that are found in deeper water most of the year. They spawn deeper and hold deeper in the summer unless a thermocline sets up in a year with little rain and little current. That situation hasn’t occurred in several years.

Just up the Tennessee River on Wheeler Lake, however, anglers might encounter crappie just about anywhere. The fish there are notorious for chasing shad on very shallow flats although they will retire to deeper water and suspend in the summer after feeding.

Much farther to the south, the Alabama River has a sizable portion of its crappie population that will feed and even live on flats filled with stumps in 4 to 8 feet. In the south-central region of Alabama where the water temperature regularly creeps to 90 and beyond, crappie can still be found shallow.

Perhaps to oversimplify the matter, crappie are where you find them. Even though the textbook might read to target deep fish in the summer, plenty of crappie can be caught shallow even when water temps peak.

To most efficiently target crappie in your area, dismiss preconceived notions about summer fishing for crappie. The process might produce spring-like results for some summer slabs.