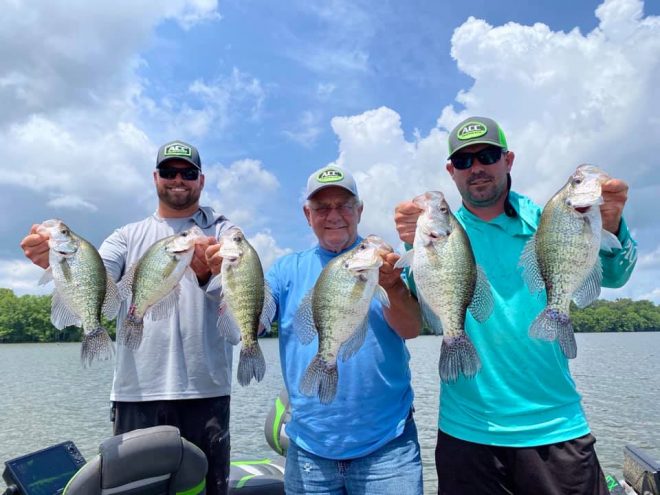 Casting jigs is a time-honored tradition among crappie fishermen.

For many years, in fact, casting was the go-to presentation for putting small jigs in front of crappie. Whether randomly casting or targeting specific structures, casting proved to be a favorite tactic for many.

Like many things, the simple process waned in popularity through the years despite its overall effectiveness. While casting never totally went away, it definitely fell in disfavor among tournament fishermen, who found they could be more efficient with other techniques, notably trolling. Their premise: if one rod is good, eight are better.

The arrival of Garmin LiveScope technology in 2018 changed crappie fishing forever and in the process sparked a revival in the popularity of casting. With LiveScope and other new “live” technologies, the need to pinpoint individual trophy fish became important and casting once again became integral to crappie fishing success at times.

When one-poling for fish visible on the electronics screen, many modern crappie fishermen took the long-pole route, deploying jigging or even trolling rods up to 16’. ACC Crappie Stix offers jigging poles up to 13’, and some anglers use the 16’ ACC trolling pole while LiveScoping. On most days, the crappie are happy to suspend within reach of the long rods.

On other days, however, the crappie are skittish and flee from sounds generated in the boat and by the trolling motor, from wave slap against the hull, and even from a boat’s shadow. Under those conditions, casting to the fish became the most viable option.

“I want to be able to use whatever technique is most effective to catch fish,” said ACC pro staff member Jonathan Phillips, of Wetumpka, AL (Team Phillips Guide Service, 334.391.9735). “I’ve caught crappie just about every possible way. I never totally went away from casting, and there are some days when it is the best way to catch fish.”

One such occasion occurred for Jonathan and his wife Alicia late last summer in the Alabama Crappie Masters State Championship. Back in the pack after Day 1, Team Phillips found a magical stump in relatively shallow water. The stump was surrounded by tournament-quality crappie. Rather than one-poling for the fish, which Jonathan recognized on the screen as the type they needed to jump up the leaderboard, he made the decision to cast.

He caught two-pounders on the first two casts. At the end of the day, a three-pound deficit turned into a two-pound advantage and another win for Jonathan and Alicia. They used the ACC Crappie Stix 6’6” dock shooting/casting rods to deliver the goods to the crappie.

“I have recently fallen in love with that rod,” Jonathan said at the time. “It allowed us to make the type of casts that we needed to get to the fish. We had to make perfect casts and let it drop straight down. I had to stop that bait. You couldn’t let it hit the fish or plow through them. They wanted you to stop it on a dime and bounce that jig. You had to get it right there. There wasn’t going to be a lot of chasing or following it back to the boat.”

In a recent conversation, Jonathan emphasized a couple of points in his comments, “perfect” casts, dropping the bait straight down, and then “stopping” it.

“I want to drop it on their head, stop it or pause it just above them,” he said. “Most of the time, they will react. There will be days when they eat it when it comes swimming by, but most of the time they want it dropped from above.

“If we’re off just a little bit, we’ll try to stop the cast and rip it back in. If you’re off a foot one way or the other, you may not get a look from the fish.” 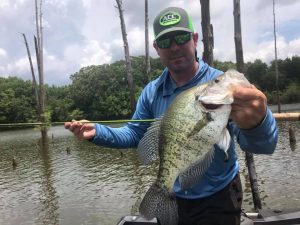 Especially when using LiveScope, long-distance casting is not necessary. Jonathan suggested that 40’ is an average cast for him although “we’ve caught fish out to 50 or maybe even 60 feet out.” Distance is not the priority; accuracy remains a premium consideration, however.

So how does one become the best caster possible?

Both Jonathan and new tournament partner Jared Gilbert, another ACC pro staffer and owner of Lay Lake Charters guide service (follow Jared on Facebook for fishing reports and trip info), emphasized the need for practice in order to become a caster skilled enough to pinpoint individual fish. Jonathan said his neighbors react sarcastically when they see him in the driveway or in the yard practicing his casting, often in windy conditions.

“I’ve gotten a little heckling,” he said. “I don’t know if heckled is the correct word or not, but they always want to know if I’m catching anything.

“I will get out there and practice even when the wind is blowing its strongest. Practicing in realistic fishing conditions is important.”

Added Jared when quizzed about his practice sessions, “Go fishing.” He said that he is always aware of the need to focus on casting accuracy and not to waste casts by being off target. He added that on-the-water practice is vital for him because of the variable wind conditions and also because of the angles from which the fish appear.

Jared, of Calera, AL, first used the 6’6” ACC rod, borrowing a couple still in their wrappers from Jonathan. Both had traditionally used shorter models but found the total package of the 6’6” — action, sensitivity, and length — gave them increased precision and efficiency.

“I grew up with a 6’ rod and mostly shot docks,” Jared said. I got my hands on the 6’6” and it felt good, gave me another 10’ of distance casting and also gave me more distance shooting docks.

While both Jonathan and Jared suggested that no magic formula exists for casting success, they emphasized the need to drop a jig on the head of a crappie and then “stop” the retrieve. That element makes the casting process much more effective.

Whether it’s a true stop, a long pause, or simply slowing the retrieve, they achieve it by making a perfect cast, allowing the jig to drop on slack line one to two feet above the crappie’s head, engaging the bail and raising the rod tip to a near-vertical position in the process. The higher the rod, the more the jig “stops.”

Turning the reel handle ever so slowly — think slow and then reel slower — combines with the other parts of the process to create the stop or pause.

“It’s something that you can achieve and get better at by watching it on LiveScope,” Jonathan said, adding the process does take more practice than just a simple cast and retrieve. 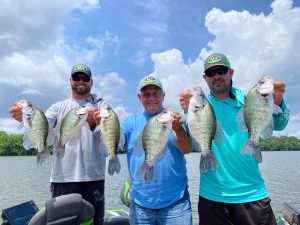 ACC Crappie owner Andy Lehman accompanied Jonathan and Jared in June to the Alabama River, and the “stop” on the retrieve was the most valuable tip he gleaned from the trip, he said.

“It was really cool watching them stop the jig and making the fish react,” Andy said. “It’s very subtle but really works. A normal retrieve would get ignored. Stop the jig by raising the rod tip and slowly reeling, and the fish would slam the bait.” 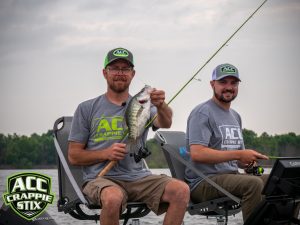 In addition to the ACC 6’6” casting rod, line is another important component in casting success. Jonathan has long used Gamma Polyflex four-lb. test for a variety of his crappie-fishing techniques. The light line is effective but also results in regular break-offs from snags.

A change to braid has increased casting efficiency for Jonathan and Jared.

“I began experimenting with it and found several things that I like,” Jonathan said.

The braid, PowerPro Super Slick V2 8-lb. hi-vis yellow, offers increased casting distance and sensitivity. Even though the initial cost is more compared to other lines, the durability of braid outweighs the cost. It also helps defray costs in another way.

“I probably would have saved a thousand dollars in jigs if I had gone to braid years ago,” Jonathan said. “When you get hung up, snap the line or just pull it loose. I rarely lose a jig now with braid.”

For the most part, straight braid with no leader has been effective. Jonathan and Jared even took a trip specifically to experiment with their set-up. Jonathan threw braid with a short leader; Jared tossed his jig on straight braid.

“At first, I caught all the fish,” Jonathan said. “Jared was saying, ‘It’s got to be the leader.’ But after a few hours, it was about even. It didn’t really seem to matter.”

Added Jared, who spools the braid on a Piscifun Carbon X reel, “It might matter if you get on an ultra-clear lake, but we haven’t been faced with the conditions when it really seemed to matter at all.”

Even with LiveScope, Jonathan said he will keep his options open. One day the fish may be deeper, which lends itself to one-poling with a jigging rod. Another day the better fish might set up on docks. Regardless of the conditions, casting remains an option.

“I don’t like to go fishing without having multiple ways to catch fish,” Jonathan said after the Alabama Crappie Masters win last year. “I worked on casting privately, not that I hadn’t done it before, but I wanted to get better. With the addition of LiveScope, the ability to cast to the fish and to know when to set the hook has really added to my arsenal.”

A modern innovation — LiveScope — has created a new purpose for an old-school presentation — casting. For many, it’s become a blast from the past, a reminder of just how effective casting can be. Live technology is not just for targeting fish with long rods.

Give traditional casting a try. The new approach with an old skill might just improve the quality of your catch.