10 Tips to Introduce Kids to Fishing 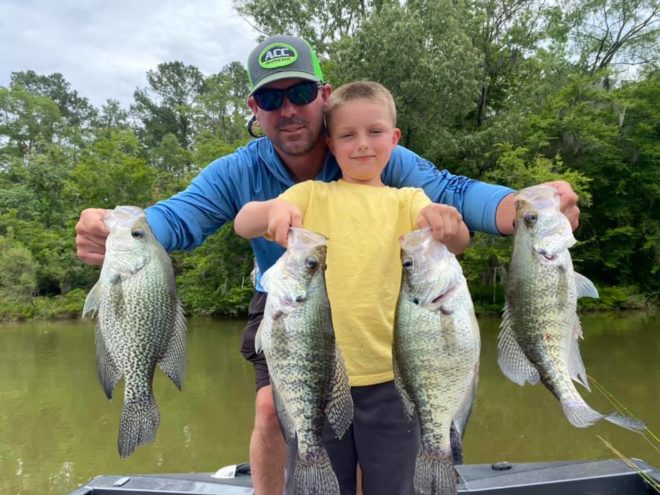 Wyatt Phillips was barely a toddler when his dad first put a fishing rod in his hand.

Now eight years old, Wyatt is an experienced fisherman who can hold his own with just about anyone, even adults. The fact that his father, ACC Crappie Stix pro staff member, central Alabama guide, and tournament competitor Jonathan Phillips, takes Wyatt on regular trips to the lakes and river systems near their home in Wetumpka, AL, probably accelerated his growth as a fisherman.

Wyatt got the chance and fell in love with all things fishing, especially crappie fishing. His path is similar to many other successful fishermen, an introduction to fishing at an early age, patient guidance from both of his parents, and regular opportunities to cultivate the craft.

“I love to fish,” Wyatt said, adding that he doesn’t even mind getting up early to go fishing while other eight-year-olds are sleeping in. “I love just about everything about it.” 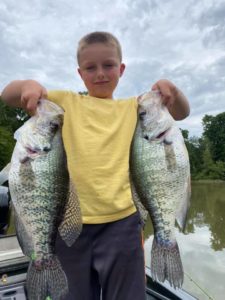 From that perspective, Wyatt is lucky. Other young people never get exposed to fishing at all, and others who get to fish can have negative experiences.

So what is the best approach to introducing youths to fishing?

The following basic tips may sound like oversimplifications but are vitally important in helping a kid develop the fishing bug.

Beyond the basics, both Jonathan and Illinois guide Fred Mooney, another ACC pro staffer, offer various suggestions aimed at making fishing a positive experience. Both actually extend some of the ideas above based on their own work with kids.

“There’s no doubt you have to be patient,” Jonathan said. “I’m lucky with Wyatt. He can take care of himself, but that’s not going to be the case with kids who don’t have experience fishing.”

He makes the point that all fishermen, even those as experienced as himself, have troubles on the water.

“I get frustrated with all the tangles and getting my lines in knots,” Jonathan said. “When I fished with my wife (in tournaments), I would hand them all to her because she’s a lot better and a lot more patient getting lines untangled. You have to expect some of those things when fishing with kids. It’s just going to happen.”

Fred, through his years of guiding (Full Moon Fishing Service, 618.731.1601), has developed a system to teaching the casting process that allows a beginner to succeed. He starts by addressing one of the ideas above and then takes the youth through a systematic approach to learning the tackle and its potential.

“First of all, I look for areas that are plentiful with fish and I abandon the search for giants,” Fred said, “until they learn how to use the equipment and the technique that I’m showing them, which is basically a slip bobber set-up on a 10’ mid-seat (ACC rod) with a 500 series spinning reel.”

In the initial stages, the rod is little more than a cane pole substitute. Fred said, “The reel handle isn’t used at all.”

“With the rod pointed straight up, I have them keep out one to two foot more line than pole length. We then learn to pull line with one hand and pendulum swing the cork with the other.” 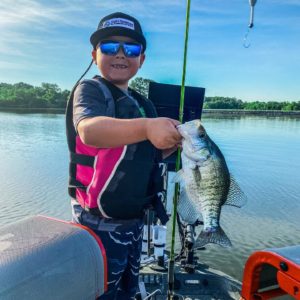 Fred said young students can quickly learn to hit precise targets and also more easily hook fish with a limited amount of line out. He teaches them to pull straight up with the rod and also to pull with the other hand on the line any time the cork goes under or gives an indication of a bite.

Only then do they graduate to casting.

“We move on to opening the bail and flipping to more distant targets,” Fred said.

At that point, Fred said it’s up to him to keep his young clients around fish, including the need to catch better quality eventually.

While the 10’ rod may seem long and awkward for children, Fred said he has helped youths as young as five put fish in the boat with it. In general, he said, the ability to use the long rod depends on a person’s listening skills and the ability to follow instructions more so than age or physical strength.

While ACC offers youth model rods, the 10-foot mid-seat jigging pole only weighs 4.7 oz. Paired and balanced with a small spinning reel, just about any age can handle the combo.

From personal observations with my grandchildren, I have learned that the fishing experience is about much more than tackle choices. Catching bait, mainly digging or picking up worms, can be as much fun for kids as the actual fishing and also creates a sense of anticipation for the trip ahead.

Playing in the minnow, cricket, or worm bucket may be a sacrilege to some, but expect that kids will want to play with the bait. Will that result in a few dead minnows or lost crickets? Most likely, but it’s worthwhile in the long run.

My grandchildren also love to play with the fish after they catch them. I try to keep the contact to a minimum if I plan to eventually release the fish, but a five-gallon bucket is a great place for kids to learn to handle fish safely.

I also thrill at how well my seven-year-old grandson has learned fish identification.

“That’s a green sunfish” or “this one looks like a hybrid, Mac,” he says frequently although he is still having a bit of a problem distinguishing between a largemouth and a spotted bass. He remains a bit timid about probing for the tongue patch.

One other consideration that comes into play: my grandchildren always want to know if a fish is big enough to clean and to eat. I clean even some of the smaller fish on occasion, giving them the opportunity to eat what they catch. They enjoy watching me clean the fish almost as much as they do catching and eating them.

Neither of my grandchildren has advanced to the skill level of Wyatt nor do they have the expert teacher available on a regular basis.

Young Wyatt continues to grow as a fisherman. He remembers his personal-best crappie, one weighing over 2 ½ lbs. caught on a jig. In general, he just loves to fish.

“That’s one of the things to consider when taking a kid fishing,” Jonathan said. “It doesn’t matter whether it’s bream fishing, crappie, or something else. They just want to catch fish.”

That something else for the Phillips clan might be chasing schools of white bass on Lake Jordan on the lower Coosa River. Jonathan might need to be practicing for a tournament or scouting for an upcoming guide trip. Many times, however, he defers to Wyatt’s wishes to chase the eager-biting, hard-fighting white bass.

“I could give a rip about catching them myself,” Jonathan said. “I want to figure out another way to catch the crappie. But Wyatt loves catching them and will fish from daylight to dark for white bass if you let him. Allowing kids to have that kind of success and not forcing them into something that might not seem as productive to them will help generate a love for fishing.”

Wyatt’s future fishing plans include purchasing his own boat, better to compete in tournaments. When asked if he planned to fish with or against his dad, Wyatt only hesitated a moment.

“I don’t know if I want to fish against him,” he said. “He’s pretty good. I think I’ll keep fishing with him.”