Almost all crappie fishermen follow seasonal patterns and use techniques to target fish at specific times of the year.

Long-lining jigs might be a go-to approach in pre-spawn, and dock shooting or vertical jigging brushpiles work well in most places in the post-spawn. Minnows prove to be a reliable option when the water temps drop to their lowest levels in the winter.

What about summer fishermen? What is a technique that best targets crappie in the hottest months of the year?

In central Mississippi, little doubt remains about what many fishermen will be doing from May through August. On Grenada and the other great crappie lakes along the I-55 corridor, ask a few people how they catch their fish and likely they will respond with a simple comment: “Pulling cranks.”

For anglers not as well-versed in the vernacular of crappie fishing, the expression might seem odd. For those who have experienced the sensation of seeing a rod bend over in the back of a boat on a hot summer morning, “pulling cranks” suggests everything they need to know about what to anticipate on a trip. 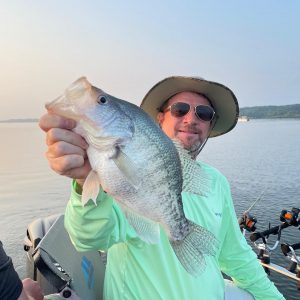 To further clarify, the “pulling” part means trolling with a spread of rods from the back of the boat as opposed to “pushing” from the front. Cranks are simply the same crankbaits suitable for bass fishing that have been adopted and perhaps modified for crappie fishing.

Tim Howell (Long Branch Guide Service, 662.251.5625), an ACC Crappie Stix pro staffer who guides on the Big 4 crappie lakes in Mississippi, will most likely be found pulling cranks on most trips in the summer. Why is the technique so good?

“The fish pull out to the deepest part of the lake to the river channels, to the deep flats just off the channel,” Tim said. “They get in what we call the summertime pattern. They suspend out there on those flats anywhere from 10 to 20 foot deep, or maybe just off the ledge. They kind of stack up. It’s the best way to catch them.”

Later he added, “Sure, you can catch them in other ways, but pulling cranks is about the simplest, most effective, and most efficient way to catch crappie when they are in their summer patterns.”

The process of trolling crankbaits behind the boat – similar to long-lining jigs at other times of the year – is a definite summer crappie killer on not only the Mississippi lake but also on other fisheries around the country, particularly impoundments that feature deeper water. When the fish settle into their summer habitats on these lakes, pulling crankbaits is a definite possibility and highly effective whether in Mississippi or not.

“You cover water, go fast and just fill the boat up with them,” Tim said.

ACC pro staff member Jeff Barnes enjoys similar success, mainly now on the Bear Creek section of Pickwick Lake on the Alabama-Mississippi line, although he has pulled cranks successfully in past competitions around the Southeast.

“Pulling crankbaits is a good way to put baits in front of crappie in the summer where they live, around the ledges, channels, and humps here on Pickwick,” Jeff said when I accompanied him on a couple of trips last year, including one that included ACC Crappie Stix owner Andy Lehman.

The history of pulling cranks is a bit blurry. A likely possibility is that many fishermen learned that crappie liked crankbaits when trolling for bass or for other species.

“I have heard tell of some old people, some granddaddies who would troll Bombers,” Tim said. “They would troll those old Bombers and absolutely wear the crappie out. They were doing it for a long time before it ever got commercialized.”

Tim said the technique filtered into the Mississippi crappie fishing scene in the early 90s, and a short time later, pulling crankbaits became an integral part of summer fishing there.

“The middle 90s is probably when it got popular,” Tim said. “I would say down here that it’s the most used technique.

Tim’s basic approach involves a staggered set of ACC rods placed in rod holders on the back of his boat. He starts with the longest, a 16’ trolling rod, on the outside followed by 14’, 10’, and 6’6” models. With that set-up on both sides, Tim has his full complement of eight rods, plenty for luring a limit of crappie in the summer on the Mississippi lakes.

He pairs the ACC rods with Shakespeare ATS line-counter reels and 10-lb. test line and uses his own formula developed through years of experience to know how far behind the boat to place the crankbaits to achieve the desired depths. He mainly trolls Bandit 300 series crankbaits, adding a Berkley Flicker Shad as a change-up because of its slightly different action.

He sets his longest line – up to 150 feet – on the outside rods and uses shorter increments of 10-15 feet on each of the inside rods. At 150 feet behind the boat with 10-lb. line, the crankbaits reach 16-18 feet. The line on the shortest rod might be out about 75 feet with the lure reaching a depth of about 8-9 feet, depending on trolling speed.

“I flat-line them out of the back of the boat (like long lining),” Tim said. “A lot of people use planer boards nowadays, but that’s too many steps for me.”

While not absolutely necessary to encounter fish, good electronics allow fishermen to maximize their time on the water.

“SideScan would be the No. 1 electronics for this type of fishing,” Tim said. “LiveScope is obsolete for pulling. I don’t even turn it on. You are seeing the fish (on SideScan) and the depth they are holding.”

Jeff takes the electronics usage a step further, plotting a zig-zag course based on what he sees on his units. Using the latest maps available, he identifies the contours and attempts to hit as many underwater points and other irregular features as possible on his route. The systematic process continually provides fresh fish and fresh water that have not seen a lure on a particular day.

“I’m still running across creeks channels, but I got to looking at all the contours on the map,” Jeff said. “I started trying to hit as many of those points on those underwater contours as I could. It has developed into a system that works.

“When I get all the rods out, I’m looking at the electronics. I’ve got the DownScan on, and I’ve got the SideScan on. I don’t care if it’s a one-foot hump or a one-foot drop, if the (Navionics+) map shows a contour, then I am going to hit it.”

Jeff, who uses Arkie 350s, Bandit 300s, and Rebel Crank Rs (discontinued) in an array of colors, said he always “starts with one pink” crankbait in his rotation. 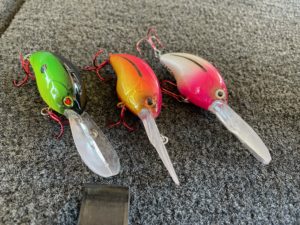 “I don’t know all the differences between the types, maybe a little different wobble or maybe one runs a little deeper, but you will catch more fish on one type on a given day,” he said.

Tim also adheres to the notion that a particular color will dominate at times.

“Through my experience, it seems one color per day will out-perform all the others,” he said.

Offering crappie different color options is so important to Tim that he has most of his crankbaits specially painted. Fred Pittman, of Delta’s Custom Crappie Cranks (see many of his designs by following on Facebook), modifies part of Tim’s crankbait arsenal with special colors.

Although days exist when the fish want solid black, white, or pink crankbaits, the time arrives when they require something a little different. Tim mentions red crawfish and clown (white with multi-colored dots) as being good producers, but those are only the start of the possibilities.

“Color is paramount in pulling crankbaits and jigs as well,” Tim said. “You know the age-old debate of ‘color doesn’t matter.’ If you’re dropping that jig on a fish’s nose with LiveScope, maybe color doesn’t matter. If you’re pulling that bait through there, and the fish need to see it, sure, color matters.

“The sky’s the limit with Fred. He’s an artist.”

Both Tim and Jeff start pulling cranks in late spring. On Grenada and surrounding lakes like Sardis (Tim’s favorite for pulling cranks among the Big 4) and Enid, the bite starts up as early as mid-May and potentially runs through August. Jeff said he pulls through October in certain years.

“For me, the best time is a bright, sunshiny day,” Tim said. “Of course, you can catch them when it’s cloudy, but when it’s 110 degrees and the sun is beating down, that’s when I really catch them. Those are usually going to be your best days. In the first two hours of daylight, they may be up on a flat feeding. When that sun starts beating down, they are going down deeper.”

For many who associate crappie fishing with late winter and spring, Tim said he will take the stable conditions of summer any time.

“This time of year is the best it gets all year long,” he said. “It’s the best, the most consistent, the most predictable. You’re going to catch the most fish every day. There are a lot of days at this time of year when we are done by 9 o’clock in the morning.”

Jeff said pulling cranks and other techniques like vertical jigging opened up crappie fishing as a year-round pursuit rather than just being confined to a seasonal thing in the spring.

“For many years, I was a traditional structure fisherman who cast for crappie,” Jeff said. “By the end of April, I couldn’t find them. I would lose them. Now with this crankbaiting, there’s no end of the season. It never gets too hot for the fish.”

Not all fishermen are accustomed to crappie fishing in the summer months and definitely not accustomed to pulling cranks for them. However, the technique is now ingrained as a go-to means of catching crappie in the heat of summer and practiced by fishermen across the country. Give it a try on a favorite lake, and don’t be surprised when pulling cranks yields a livewell full of crappie.