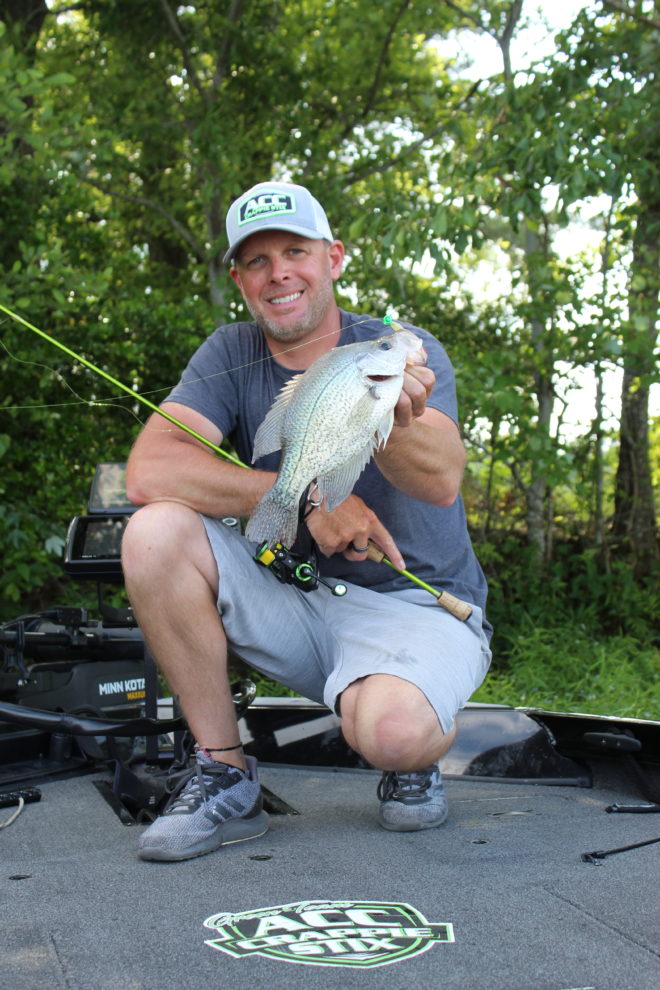 For Jeff Jowers, a love affair with the Coosa River dates back many years.

The ACC Crappie Stix pro staff member has fished the Coosa religiously since his formative years, pursuing just about all species that swim on the system that travels through east-central Alabama. His love for crappie fishing extends through most of that period. Recently, with the addition of LiveScope technology to his boat, the passion has grown even stronger. Even though his experience was vast, the new technology has also added immensely to Jeff’s understanding of crappie habits.

Six reservoirs make up the Coosa chain. Renowned crappie fishery Weiss Lake is the first, starting in Georgia and crossing into Alabama near Centre. Moving downstream, Neely Henry, Logan Martin, Lay, Mitchell, and Jordan all boast excellent crappie fishing as well. Weiss may be the most famous, but many fishermen, Jeff included, wouldn’t suggest it is the best Coosa impoundment for crappie fishing.

Jeff normally focuses his fun fishing on Lay and Mitchell, neither of which has much of a reputation nationally as crappie-fishing destinations. Jeff disproves that idea almost on a daily basis from fall through late spring.

“The entire Coosa River can be phenomenal for crappie,” Jeff said. “I’ve just fished Lay and Mitchell all my life, and that’s where I am most comfortable.”

I joined Jeff for a late afternoon trip on Lay Lake in May, a time when he said the crappie bite can be difficult on the entire length of the river. His worries were unfounded, however. When he picked me up at Beeswax Landing near Columbiana (located about 15 miles off I-65 south of Birmingham), he already had several quality fish in the livewell.

Because the trip was a short one, we motored out of Beeswax just upstream to Bully Creek, which proved to be loaded with wood structure and crappie. Jeff caught fish on the first three pitches and then handed the rod to me. While I couldn’t duplicate Jeff’s knack for discerning the light bite, I managed to catch the biggest fish of the trip, a black that weighed about 1½ lbs. Business constraints forced me back to the ramp after just over an hour, but we boated about 15 crappie on the trip.

Even though Jeff was scheduled to fish the Alabama Crappie Masters state championship the next day on Neely Henry, he couldn’t resist the hot bite and went back out until dark. By the way, he finished third in the Crappie Masters tournament.

“I normally don’t fish up this way,” Jeff said. “It’s just a little more convenient for me to launch down the river, and I have several places that hold better fish down that way.”

On one such trip in February, I met Jeff at the Narrows boat ramp on the lower end of Lay. The Narrows is one of the landmark features of the lake at a location where two points extend to create a neck. People often say they fish “below the Narrows” or “around the Narrows.”

The trip was featured in Alabama Outdoors News in April, and a photo of Jeff from the outing graced the cover of the magazine that month. We spent a chilly morning chasing pre-spawn crappie with LiveScope, and Jeff fully explained his approach to spring crappie fishing on Lay in that article.

The May fishing was not greatly different although the crappie were well on their way to summer mode. Chasing the fish with LiveScope proved efficient yet again.

As has been the case with other fishermen across the country, the new technology has been a game-changer for Jeff. He caught plenty of crappie pre-LiveScope but didn’t always understand why a setting was loaded with only small fish.

“I would always just cast and drag,” he said. “Go up to a tree top and just cast to them and hope for the best. I had no idea that those big females would be sitting out in the middle of a creek just isolated by themselves. I would have never known that. I always thought they congregated together, and the bigger fish just don’t do that.

“I might occasionally see two or three fish together, but most of the time, the biggest fish are single females by themselves.”

Jeff offered some good advice about the use of live technology but particularly about presentations and retrieves. He normally uses an ACC rod up to 7½’ for casting, pitching, and dropping on crappie.

“Make the pitch, whether it be in a brush pile or on an isolated fish, and sometimes she will follow it to the boat,” he said. “She might follow it two feet or maybe 15 feet back to the boat. Whatever you do, don’t stop that jig. Just keep a steady retrieve. If she’s following like that, whether it’s 10 feet or 20 feet, 90 percent of the time she will commit to it as long as you do not change the motion of that jig. That’s a critical mistake.

“Most people want to let it sit there, stop it, jiggle it up and down as if they were bass fishing. Crappie do not like that whatsoever.”

Choosing the right rod is another tip Jeff suggested. For some people and especially for youths, the shorter ACC rods might be best. Others may prefer one of the mid-size rods like the 7½’ or 8’ models. Then others choose the longer jigging poles, which ACC offers up to 13’. 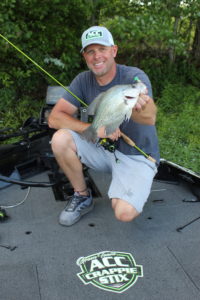 Choosing the best rod-reel-line setup is especially critical in late spring and summer.

“Rod action is critical,” Jeff said. “Normally when they come off the spawn, most of them are lethargic. They are not going to give you that thump or the line is not going to jump six inches.

“A lot of times she’s going to follow. Sometimes she will just be there. It’s critical to have a rod with a real soft tip.

“She may follow the bait. I’m reeling slowly and lifting the rod tip. I may not feel anything, but the top of that rod is going to load up. It’s going to get spongy, like I have a wet leaf on there. That’s when I’m going to set the hook. They are just not that aggressive and may not hit like they do earlier in the year.”

Jeff said the crappie bite typically slows on the Coosa in late spring. He might end up with a cooler full of crappie but is often forced to hit multiple spots and burn up a tank full of gas because of the finicky bite.

“On the Coosa River around the end of May, the bite can get tough,” he said. “Around Memorial Day, I’m pretty much done with the Coosa. The water gets gin clear with a lot of recreational boat traffic, which plays a part with all the waves and makes (boat control) tough.

“It also affects the fish. They get tight to cover and don’t want to follow and commit. It makes for a hard bite. You pull up to a brush pile, and there might be 200 fish on it. You might get one or two aggressive fish, and the rest of them, no matter what you throw at them, a minnow or a jig or whatever, will just look at it. It’s just a hard fishery in the dog days of summer.”

For Jeff, however, the Coosa River crappie bite remained strong through the early days of June. In fact, he made one trip at the end of May that he said was one of the best for both quality and quantity that he’s ever experienced.

Most years finds Jeff on other fisheries in the summer, specifically the Tombigbee and lower Black Warrior rivers. Jeff normally travels to Demopolis, AL, where the Black Warrior empties into the Tombigbee. The trip is about an hour from his home.

“June, July, and August, I go down to the Tombigbee or the lower end of the Warrior river,” he said. “I’m targeting white crappie. They like mud, and (the Tombigbee) stays muddy. It doesn’t matter if it’s 110 degrees in the shade, those white crappie will still be in six to 10 feet of water. They are just isolated fish in the creek channels, and they will bite all day long.”

The venue provides Jeff a change of scenery and a quality fishery that doesn’t get that much attention outside the region. Locals know the potential, but most confine their crappie fishing to the spring.

“You don’t hear that much about the Tombigbee, but you will see people down there when the dogwoods bloom, when they are on the bank spawning,” Jeff said. “You will see people tied up to a tree fishing with a cane pole and a cork and minnow. But as far as chasing roaming fish, that’s not something I hear anybody talking about. Usually me and a couple of others.”

He catches summer fish with the same techniques and presentations that he uses on the Coosa through the fall, winter, and spring. Jeff said he marks a date on the calendar, Oct. 15, for his full-time return to the Coosa. That’s the opening day of primitive weapons season for deer in Alabama. Much like fishermen flood the waters when hunting season closes in late winter, they exit the lakes and rivers for the deer woods in the fall.

“Sometimes late September — it depends on the weather that year — and in October, the Coosa starts turning back on,” Jeff said. “November can be phenomenal, and December can be as well.

“Usually when deer season starts, that’s when I come back to the Coosa on a regular basis. Most people are gone, the Seadoos are off the water, and people are in the woods hunting. I’ll come back here and chase these big blacks.

“In the winter time, meaning January and February, you get that pre-spawn pattern. I target these big females. They will be right off the channel breaks in the creeks.

More than anything, Jeff just loves to crappie fish. He said he will take people on trips, and he is considering starting a full-time guide service. Normally he refers people who want a guided trip to a friend but will honor someone’s request for a trip.

“There are those people who request to go with me, and I will take up to two people out at a time,” Jeff said. “I’m thinking about getting into (guiding) a little heavier down the road.”

Jeff is a Jemison, AL, resident who is a partner in a wildlife removal service, A+ Wildlife Specialists. In addition to ACC Crappie Stix rods, Eye Hole Jigs, TOPHAT Jigs, K9 Fishing, and Twisted Minnows plastics are other products that help Jeff put more crappie in the boat.

To see Jeff’s fishing reports and photos, friend him on Facebook. To check on the potential for a trip on the Coosa or on another lake, contact him at 205.294.9202 and leave a message or text.