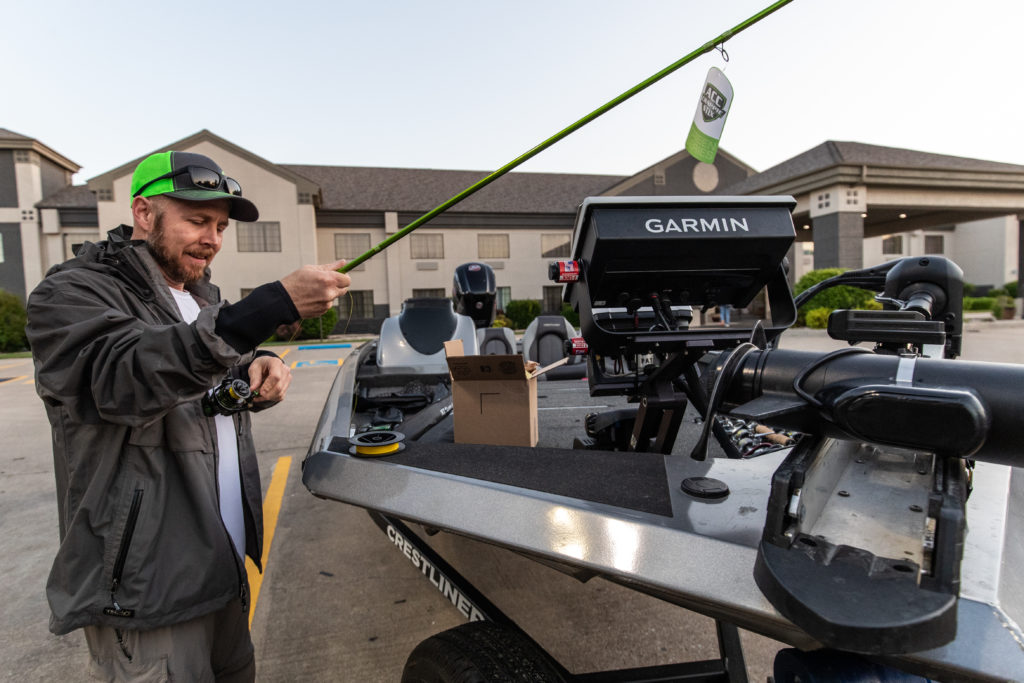 Line twist on spinning reels ranks as a chronic problem for crappie fishermen.

Whether they are trolling, pitching, or casting, fishermen deal with the issue regularly. Some have developed a process of spooling line that minimizes the issue while never totally controlling it. Even so, a few extra moments spent working with line and the spooling process helps in the long run.

ACC pro staff member Jeremy Lindsey has dealt with line issues though the years and developed his own routine to help control the problem, which manifests itself in a variety of ways. Line jumps off the reel, sometimes in the form of knots that eventually have to be cut out. Even if a knot can be unraveled on the go, twist likely remains and will rear re-appear again in a matter of time.

Jeremy, a Missouri tournament angler, often takes a proactive approach, conditioning his line at home prior to trips. Those times exist, however, when he has to practice the process on the water. Regardless of the location, taking a few minutes to properly spool a reel is an often-overlooked element of pursuing crappie that can make a fisherman more efficient on the water.

“I had to do it on the water just the other day,” he said. “I had started fishing and realized that I had gotten down to the spool and didn’t really have enough to fish with. So I took some time to re-spool, and in a few minutes, I was back to fishing.”

Jeremy doesn’t use any of the line-spooling aids or accessories available commercially. Instead, he goes through a meticulous process of spooling and re-spooling multiple times until he is happy with the way the line rests on the reel.

Using a Pflueger 10 series as his standard spinning reel for just about all types of ACC Crappie Stix rods, Jeremy runs his line – fluorocarbon 10-lb. test or heavier – on the reel and then immediately de-spools it. He repeats the process a second time and considers the result. If the line hasn’t developed the look and feel of what he wants, then he might repeat the process another time or two.

Jeremy acknowledges that many fishermen will let line run off the spool in the water after experiencing twist issues during an outing and then wind it back on. However, he emphasizes that once may not be enough.

“I don’t have memory on my line if I go through this process multiple times,” Jeremy said. “I know fluorocarbon has a reputation as being tough to deal with and people have trouble with it at times on spinning reels. That’s probably the result of not paying attention to the details and not doing a good job of putting it on.”

One of those details is hand tension. Jeremy takes a grip of the rod and line with one hand and reels with the other, creating just the right amount of tension to lay the line down neatly on the spool. Tighten the drag down during this process, or any slight slip of the spool can potentially create twist. Just remember to loosen the drag when resuming fishing.

Another part of the process that eliminates problems is putting the right amount of line on a spool. Too much line results in it “jumping” off the spool. For Jeremy, there’s really no such thing as too little until almost all the line is gone off the spool.

“I spend most of my time ‘dipping’ with one pole in hand,” Jeremy said. “I don’t really need that much. Fifty yards is plenty. Probably 30 or 35 is enough. I definitely want to have that ‘lip’ on the spool that prevents the line from jumping off.”

Jeremy once favored braid for his crappie fishing, making the change to fluorocarbon over a year ago due to the wind knots that develop in braid. Regardless of the type line, the process of meticulous spooling and re-spooling will eliminate problems that also recur with braid and with mono.

The various superior qualities of fluorocarbon – excellent sensitivity, abrasion resistance, low visibility, and minimal stretch – that make the line excel in other types of fishing translates to crappie fishing as well. It performs at a high level and stays well-behaved with just a little more attention to detail when spooling.

“The way that I condition my line makes using fluorocarbon easy for me,” he said. “It’s not a difficult process, just a little more time-consuming.”

Admittedly, re-spooling is a tedious process that most fishermen would rather avoid. Spooling reels well and with attention to detail makes any fishing trip more enjoyable.

The next time that a knot develops on the spool or on a cast, consider why. Reflect back on the process of how the line was put on the reel.  Jeremy’s pain-staking process works for him. It will work for the average angler as well.