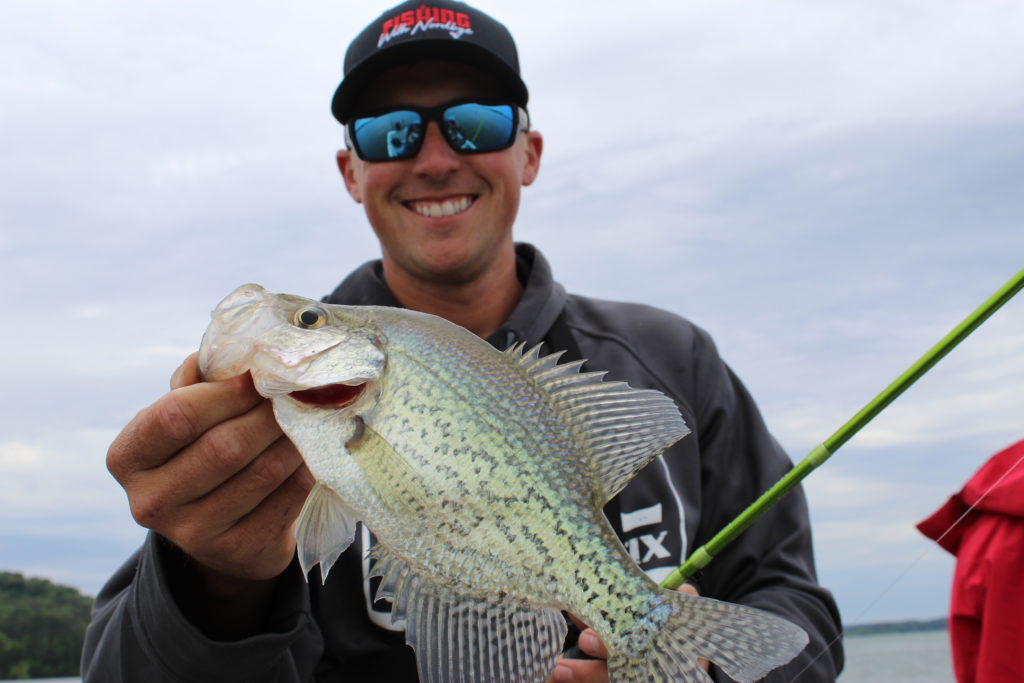 The allure of Lake Guntersville has captivated more than one visitor.

The setting – just about any place on the lake – serves as a tourism poster. The people are hospitable to extremes, and the fishing remains on par with just about any destination in the country.

So what more could a young couple like Codi and Andrew Nordbye desire? As it turns out, very little. The Guntersville area checked all the boxes for the Nordbyes, who first visited the area in May 2019. They fell in love with the locale, the people, and the potential and returned some six months later to live, leaving their northwest Missouri roots for the fishing – that’s Andrew – and for the warmer weather – that’s Codi.

Since the move they’ve become entrenched in the local Guntersville scene. Andrew continues his successful YouTube career (Fishing with Nordbye) and various others activities that complement his love of fishing. One of those activities is becoming one of the newest members of the ACC Crappie Stix pro staff.

Codi, meanwhile, has acclimated nicely with various projects in the works, including transforming (with a little help from Andrew) the old Little New York bottling facility near Guntersville State Park into an events venue with lodging. She gets in her share of fishing as well.

“We fell in love with the area and knew we wanted to come back to live,” Codi said.

Added Andrew, “The move has been great. I work from home, so that wasn’t an issue. We’ve gotten to know people, everyone has been super friendly, and fishing is as good as you will find anywhere.”

The fishing was the primary purpose of a recent visit with the Nordbyes. ACC owner Andy Lehman and I met them at their home just north of the lake on an early May day. We first enjoyed Codi’s culinary skills as she prepared a huge breakfast. We also met Scout, an unbelievably disciplined Golden-Labradoodle mix that looked longingly at the eggs on our plates but never made a move. (For full disclosure, Andy did slip the dog a few bites of eggs.)

The nearest boat ramp on Guntersville is within 5 minutes of home for Andrew, and we found plenty of fishing opportunities within a 10-minute run of that ramp at the mouth of Alred Creek.

While Andrew bass fishes competitively – more on that later – we didn’t pursue Guntersville’s famed largemouth. The goal was to fish for crappie early and then check out some bream beds later. The crappie fishing on Guntersville has come on the radar of national tournament circuits over the last few years. The bream fishing, both bluegills and redear (or shellcracker locally), were on the beds and waiting to be caught.

“We’re going to hit a couple of the bridges,” Andrew said, referring to one of the time-honored traditions of crappie fishing on Guntersville.

The bridge crappie didn’t cooperate. Although a few fish showed up on LiveScope, they proved to be reluctant feeders. During the first stop, Andy provided the trifecta of unusual catches, first landing the tiniest white bass I’ve ever seen, secondly casting and hitting a bird that took several seconds to extricate itself unharmed, and finally hooking a line with a dead bream on it.

“This is great,” Andy said. “I’ve come all this way to Guntersville, heard all these things about the great fishing here, and I catch nothing but weird stuff!”

Andrew, however, remedied the slow start. After checking out a couple of bridges for crappie and making one detour to check out bream beds, he left the lower lake behind and headed upriver toward some wood structure that he thought would hold post-spawn crappie.

The fish weren’t exactly stacked on the next stop, the perimeter of a main-lake dock that was loaded with structure, but we had the makings for a fish fry by the time we left. The black crappie in the tops liked the variety of jigs that we tossed their way on 6 ½- and 7 ½-foot ACC casting rods. 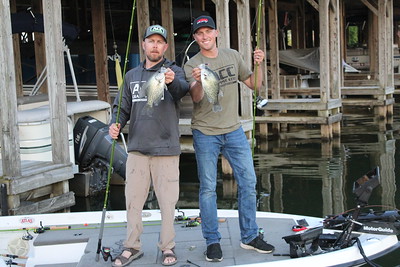 We later stopped to chat with Boyd Duckett, one of the founders of MLF, veteran bass tournament competitor, and business entrepreneur for whom Andrew had done video work (see all his business ventures and sponsors at www.fishingwithnordbye.com) since his move to Guntersville. Boyd walked down to his dock and chatted with us about fishing and business.

“He’s a great guy,” Andrew said. “You never know who you will run into on Guntersville. He’s an example of the type of people that we’ve met since moving here.”

The next stop proved to be the best stop of the day for crappie fishing. Andrew returned to brush tops he had marked near the mouth of one of the bigger feeder creeks on Guntersville, and LiveScope lit up with fish. The black crappie were not huge, running up to about 14 inches, but the action was steady for an extended period. 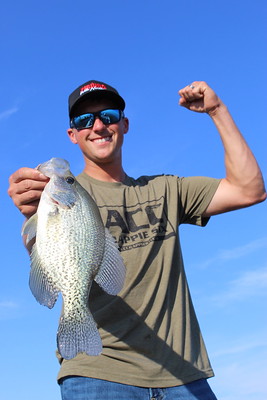 As we fished, Andrew stopped at various points to record video, the need to produce YouTube content ever present even when entertaining visitors. When we stopped an hour or so later for a lunch break, his YouTube reach was evident when a couple of locals recognized him at the boat ramp and chatted for a few minutes.

“It’s really neat to know that people are out there consuming your content and that they recognize you out on the water,” Andrew said.

The recognition was even more evident after the lunch break – Andrew took us to a killer burger joint, one that I had passed up a hundred times on my trips to Guntersville – and we returned to another ramp close to his home.

“It’s Nordbye!” came a delighted squeal from a couple of early-teen girls, proving that everybody is into fishing at Guntersville. He stopped to take pictures with the girls and a couple of teenage boys who were with them.

Andrew’s YouTube days preceded his move to Guntersville, but his popularity was evident during the trip as he stopped and talked at least 3 times with fans.

He also conversed regularly with Codi by phone. She was doing the real work of the day, cutting grass at the events venue and also cleaning up after visitors who spent several nights at the lodge while on Guntersville for a bass tournament. She also conveyed the idea that she had booked yet another wedding, bringing the total to 15 for the year. The facility only opened in April.

“I’m working too,” Andrew said with a smile after one phone call.

Back to the fishing, Andrew and I spent most of the afternoon pursuing bream – Andy had brought his own boat for the afternoon session – and we finally covered enough water to find the bluegills and a few redear.

We had concentrated our efforts in extremely shallow water and found random fish but finally located a better concentration of bream, including the first redear of the day, in slightly deeper water. The beds and a few fish were still visible with polarized glasses among the scattered milfoil patches, and we dropped a steady stream of bream into the livewell to supplement the crappie caught earlier. 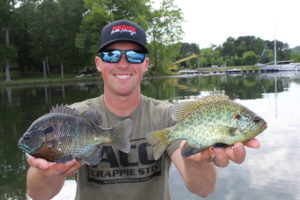 “The fishing today illustrates just what the type of quality multi-species lake that we have here at Guntersville,” Andrew said. “Take your pick; we’ve caught crappie, bluegill, shellcracker, even a catfish today. It’s a great place to fish and to live.”

The fishing day finally came to an end about an hour before sundown, but Andrew wasn’t finished with his work. After he loaded the boat, he spent another 10 minutes wrapping up video for the day. With practiced ease, he videoed himself and recapped the day’s fishing, the recording headed to YouTube over the next few days.

“I just put out all sorts of fishing video. They are fun, and people can learn something. Bass (fishing) is mainly what I do, but I do a little bit of everything, bluegill, crappie, catfish, walleye, even saltwater fishing. Wherever I go and wherever I fish, I video it.

“Also with the YouTube channel, I go by the motto from Psalms 55:22, “Cast your cares on the Lord, and He will sustain you,” so I am also trying to grow people’s faith.”

Throughout the course of the day, I asked Andrew various questions about his career and about his move. One highlight – for all the wrong reasons – was a trip to Dale Hollow Lake in Tennessee earlier this year. On that classic smallmouth fishery for an MLF Big5 Toyota Series tournament, Andrew was headed to launch and literally lost his boat.

He tells the story best.

“I’d been fishing all week,” Andrew said, “and I was ready for the tournament. Day 1 comes, the morning of, and I’m back up in the hills headed to the boat ramp. I go up a little hill and then it shoots down and curves to the left. It has been raining all night, and it was dark. I wasn’t speeding, but I hit my breaks a little bit, and my truck hydroplaned just a tiny bit.

“I never left the road, but somehow my boat trailer slid into the mud shoulder. As I went around the curve, the shoulder ran out, and my boat backflipped off the trailer, breaking my straps. I watched it happen in my rear-view mirror. It was crazy, but God was looking out for me.”

The boat bounced some 50 yards down a cliff and required two wreckers to winch it up. He recorded the recovery on video and used the moment as a lesson on safely pulling a boat for his YouTube audience.

Despite the boat casualty and a washed-out dam at the pond on the venue property, the last 18 months has been a whirlwind of success for the Nordbyes. The move took a leap of faith for the couple, one with which they appear perfectly content.

“We miss our family, but everything else is great,” Andrew said. “God has provided.”

Subscribe to Andrew’s YouTube channel at Fishing with Nordbye. For more information about the events venue, follow Sweet Springs Venue and Lodge on Facebook. The lodge can be rented directly on Vrbo or Airbnb.