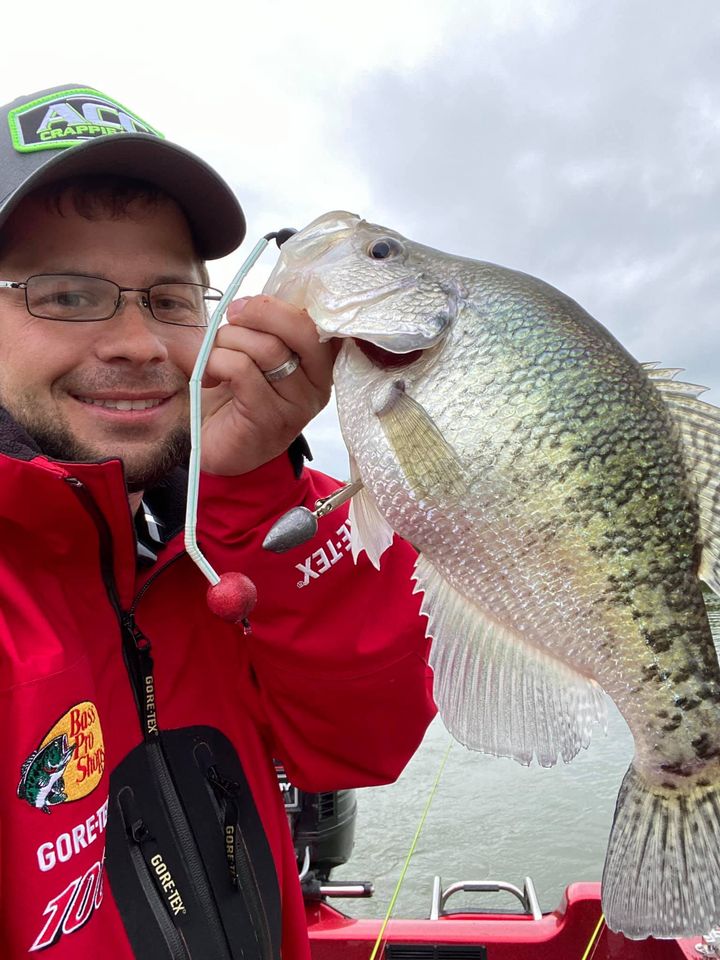 For post-spawn crappie on Watts Bar Lake in east Tennessee, guide and YouTuber Matt Xenos relies on a one-two approach that knocks out limits of crappie at this time each year.

Matt, an ACC Crappie Stix pro staff member, guides and fishes on the sprawling Tennessee Valley Authority reservoir enough to follow the migration patterns of crappie each year. He watches them stage on select areas during the pre-spawn, knows when they move shallower to spawn, and traces them back out to deep water in the post-spawn.

He catches fish around two primary structures during the post-spawn.  Deeper docks hold plenty of fish for dock shooting, but Matt attacks the many brushpiles on Watts Bar as his go-to approach.

Matt, who organized and also serves as president of the East TN Crappie Club, primarily targets the mouths of coves, creek channel ledges, and river ledges.

“I’m looking for brush in those areas, those same staging areas that the big females use before the spawn will hold them after the spawn,” he said.  “It’s just pretty much the same pattern in reverse. They will stage up, move in and spawn, and then come back to those same areas once they have spawned out.”

In the post-spawn, Matt identifies those brushpiles in depths of 15 to 25’. He finds bigger fish in that range until the dogdays of summer, when the biggest fish generally push a little deeper. He characterizes the post-spawn as extending well into July in most years, however.

Matt finds two categories of crappie on the brushpiles during the post-spawn, fish that pushed into spawning areas in March or early April and relative latecomers that spawned later in April or even in early May.

“The fish are out there, and some of them are wore out,” he said, referring to the recently spawned-out crappie. “You have fish that are in two different mood, those fish that are slap wore out and just don’t want to eat. You have to force feed them with a vertical presentation, a smaller jig with little action.

“Then you have those early spawners that have already recuperated from the spawn, and they are very, very active. They are feeding, they are active, the water temperature is rising, the shad are moving in. They are out there looking to eat.”

Matt, of Maryville, TN, uses his electronics in a variety of ways to pinpoint the fish. He uses down- and side-imaging modes to target the fish, identifying where they are holding in the top, the depth of the structure, and also the depth of the fish.

Then he goes to work with “live” technology to pick off individual fish.

“I always throw a buoy out on a brushpile,” Matt said. “(For the active fish,) I cast across and count down the jig. I know a 1/16th jig falls one foot per second, so I know where the fish are and where my jig is in relation to them.”

Matt uses a 6 ½’ ACC rod for his casting presentations. He pairs it with a Pflueger Trion reel spooled with 12-lb. Bonehead hi-vis orange braid. He adds about a 4’ leader of 8-lb. fluorocarbon, connecting to the main line with a uni knot.

His jigs of choice, he calls them “pony” heads, feature a willow blade and are built by Curtis Hobbs (www.litewirehooks.com). He usually completes the lure with plastics featuring “some type of action like a curly tail.”

“Those aggressive fish will turn on that jig and whack it,” Matt said.

For the less aggressive crappie, Matt uses an ACC jigging rod, the 10-footer with super grips, for a more finesse presentation.  He finds them with his electronics in the brushpiles and drops smaller jigs, usually Bonehead Stump Bugs, vertically. Matt pairs the jigging rod with the same reel and line he uses for casting.

The brushpile fish are perhaps the most consistent on Watts Bar. Don’t discount the dock-shooting possibilities, however.

Many of the fish, the black crappie in particular, like to rest on the way to the brush, and one definite stopping point is a dock. Matt said seek out main-river docks or the “1st or 2nd dock inside creeks” for post-spawn crappie. The best docks are those with at least 15’ of water under them.

Matt uses his electronics to a certain extent on the docks, identifying where the crappie are suspending, and then ignores the LiveScope.

“I like to figure out where those fish are,” he said, “one corner, under a boat, on a particular post. I like to find them (with LiveScope) and then quit looking at it. If you have 20 or 30 fish grouped up, you can’t see a jig anyway. I fish from feel from there.”

Matt said his dock-shooting set-up is “a total 180” compared to his casting tackle. He uses a 6’ ACC shooting/casting rod paired with the Trion reel, which he spools with 4-lb. Vicious hi-vis yellow mono for dock shooting.

The rod, he said, is also the most effective he’s ever used for dock shooting.

“The backbone is set in that rod at the perfect location,” he said.

The jig is a final part of the dock-shooting equation for Matt. He almost always uses a 1/32nd-oz. model when shooting docks.

“I don’t want the jig to blow by the fish,” he said. “I want it to flutter down through the fish.”

While other techniques can occasionally be used to catch post-spawn crappie on Watts Bar, Matt said he normally only focuses on the brushpiles and on docks.

He adds a final tidbit that will help all fishermen on the lake and perhaps on others as well.

“One thing that I tell all my viewers and followers, members of the club: Keep moving,” he said. “If you’re not finding fish, keep moving. Stay behind that steering wheel. Don’t try to force fish to be there. Find them. Don’t stop and hope fish are there.”

For a guided trip on Watts Bar and just about any other east Tennessee lake, contact Matt through his Wired for Crappie website (www.wiredforcrappie.com). Also find merchandise available there as well as a link to his Wired for Crappie YouTube channel. He also hosts a YouTube Live Q&A Wednesdays at 9 p.m. ET about all things crappie fishing.

In addition to being a member of the ACC Crappie Stix pro staff, Matt is also associated in the same capacity with Crappie Cove (www.crappiecove.com), a Maryville, TN, store that features a full line of ACC rods along with the other lures and accessories that make him a successful guide and fisherman.