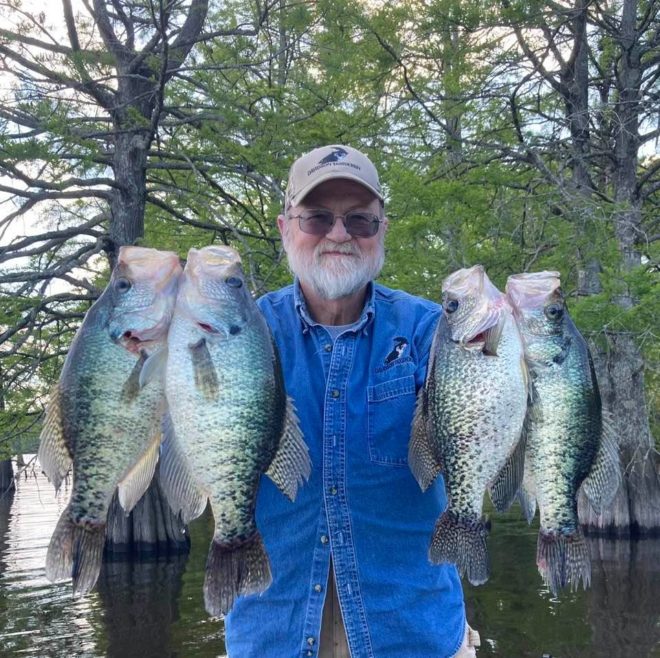 It’s best known as a bass-fishing destination and certainly deserves that reputation. Yet plenty of locals know the potential of Toledo Bend as a crappie-fishing paradise. When the crappie begin to move away from the spawning areas, Keith Acker knows exactly where to find them each year.

An ACC Crappie Stix pro staff member from Haughton, LA, Keith makes the trip to Toledo Bend regularly in late winter, spring, and early summer, a period when the hot post-spawn bite is occurring on the vast lake. Early in the year, Keith typically fishes the northern part of the lake, where the spawn occurs first. As the year progresses, he changes locations on Toledo Bend to intercept post-spawn fish as they move away from the shallows, generally targeting fish in a north-to-south progression.

“Toledo Bend is a huge lake,” Keith said. “They don’t all spawn at the same time. They tend to spawn over several months. The fish tend to move in in February, so you start having post-spawn fish in March. You can catch post-spawn fish then along with spawning fish. They overlap.

“Typically once the fish leave the spawning flats on Toledo Bend, they pull back to the creek channels, to the mouths of creeks, and usually in 15 – 25 foot of water on brush. They will group up, starting ganging back up in the brush, and you can catch large numbers.”

Keith fishes the northern part of the lake first not just because of the southern exposure and early warm-up but also because that portion of Toledo Bend is shallower.

“Typically the south end has deeper pockets,” he said. “The temperature doesn’t warm up quite as fast as the north end.”

Keith stays in touch with the waves of fish that move in and out. He knows when, where, and how to target crappie on certain areas of the lake. For example, he said the mid-lake section is a popular one, an area where local fishermen drop plenty of brush tops that serve as safe havens for post-spawn crappie.

By this time of year, the spawn is likely over. Keith said some spawning activity will occur as late as May, but that usually by early April, at least 70 percent of the spawners have completed their annual ritual and have begun their move to the offshore wood structure.

“They go to those brushpiles and are good there until about July,” Keith said. “Once you get to the dog days of summers, those piles taper down.”

Finding the fish is the first part of the equation. Keith generally uses various modes of his electronics to find schools of crappie and then relies on LiveScope technology to pinpoint individual fish.

“I normally use (a side imaging mode) to locate brush and structure that hold fish,” Keith said. “If you have good enough (side imaging), you can see fish themselves. Once you do that, drop your trolling motor and go to LiveScoping.”

Keith’s favorite approach – and he emphasizes that he is in the minority on Toledo Bend – is to pitch jigs to the fish after locating them on his LiveScope screen. He typically pitches hair jigs with a 10’ or 11’ ACC mid-seat rod. He places a split shot about a foot above the jig on K9 10-lb. fluorocarbon. The added weight is not necessary to get the jig deep but rather helps Keith see it better on the screen.

“To me, you have more control of the bait and which fish you are going to target (as opposed to other presentations),” he said.

While the use of “live” electronics is growing on Toledo Bend, Keith said the lake is “definitely behind the times.” He said most fish are still caught using traditional methods.

“It’s still a brushpile lake,” Keith said. “Pull up to (the brushpiles), set a cork at a certain depth, and pitch to them with minnows. That’s still the most popular way to catch them, the way most everybody still fishes. The fish will come up out of the brush to get those minnows. I still prefer pitching jigs to them.”

Keith said he’s found no reason to deviate from his pitching presentation. He said windy days might tempt him to cast to crappie, especially if the wind is strong enough for the boat slap of the waves to spook fish.

“I personally have not seen it that bad,” he said. “If you get a windy day and have to worry about the boat slap, then I could see casting to them. Otherwise, you can use one of the longer (ACC) poles and get to the fish and pitch 15 feet or whatever.”

Once located, Toledo Bend crappie react aggressively to either a jig or a minnow.

“They are aggressive and ready to feed after the spawn,” he said. “They will hit almost anything that comes by them.

“There are probably colors that work better than others, but baits usually come down to personal preference. Usually whatever you have confidence in, that’s what you need to be fishing.”

Regardless of the approach, Toledo Bend yields large numbers of quality crappie. The post-spawn, which extends well into the summer, produces as many fish as any other time of the year. The time is now. Take advantage of the opportunity on this huge lake.