Rend Lake Buckbrush: Love it or hate it 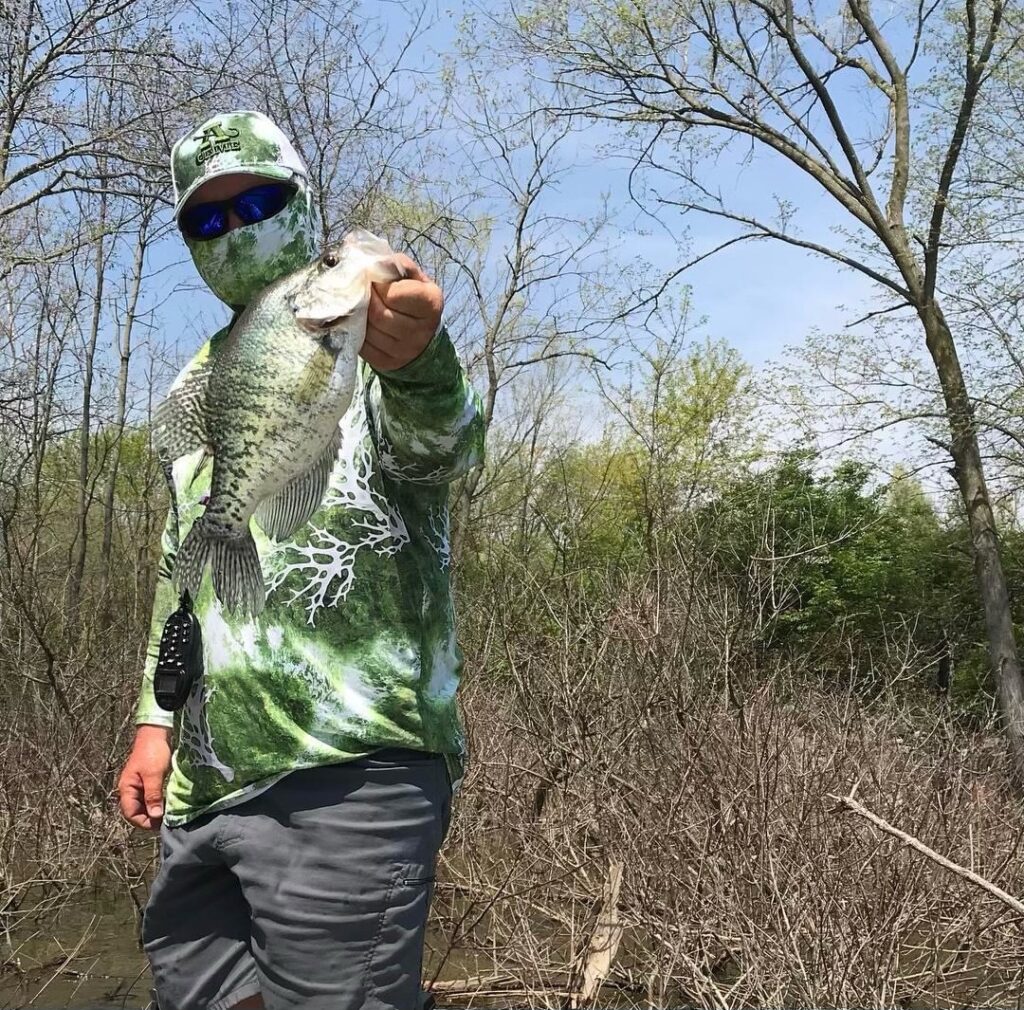 Fred Mooney acknowledges a love-hate relationship with the buckbrush on Rend Lake.

The gnarly plant is a crappie haven in the spring, providing the best of habitat for spawning purposes. Few lakes have as much buckbrush as Rend, the 18,900-acre fishery in southern Illinois.

“It’s basically what made Rend Lake famous,” said Fred, owner of Full Moon Fishing Service (618.731.1601) and member of the ACC Crappie Stix pro staff. ”There’s not a whole lot of lakes that have as much buckbrush in the water as we do. To me, it’s a double-edged sword. I love it and I hate it.”

Andy Lehman, ACC and former guide on the lake, echoes the comments of Fred about the quantity of the bushy plant, emphasizing not only the idea that Rend is rimmed with it but also the difficulty of penetrating individual plants with baits and clusters of multiple plants with a boat.

“You have to commit to fishing it,” Andy said. “You can’t just fish on the perimeter. To really fish it well, you have to get up in there with the plants and the birds and the snakes.”

Despite the obstacles, now is the time to fish the buckbrush on Rend. The crappie have started their move into the shallows, and a large percentage of Rend Lake crappie propagate the population in the safe haven offered by the plants. Both Fred and Andy emphasize that not all Rend crappie spawn under buckbrush, but it is the most obvious target for shallow fish in the spring.

“Right now, we’re in mid-April and it’s just starting. I don’t think it gets really good until about the first week of May. I think right now we’re teetering on it getting really good. It’s all weather-dependent. One night it’s 70 and the next night it’s 30. Weather is what sets the pattern, and once the temperatures get stable is when the crappie will move in.”

For those unfamiliar with the plant, buckbrush is a type of bushy vegetation that grows in water and out and characterized by erratic growth patterns. Normally two to four feet high, it can grow considerably larger at times, and taller plants in particular create havoc with a crappie on the line. Limbs or creepers grow in every direction, compounding the problems of fishing it.

One of the first considerations is choosing a place to fish. The volume of buckbrush on Rend can be overwhelming, much like fishing a lake with super abundant grass. Not every place is productive.

Fishermen position their boats adjacent to clusters in a variety of ways. Shallow-water anchors like PowerPoles are a popular option. Another is to tie off. In the past, Fred has pushed his metal boats on top of the bushes with the gas motor.

“I treated it like Moses and parted it with the metal boat and let it sit,” Fred said. “I’m not exaggerating. By the time we got the boat situated and the rods ready, the fish that we had spooked were already back in there.”

Wading is another consideration with fishermen spending hours in the water picking apart a small location.

Fishermen attack the buckbrush with two basic presentations. Andy prefers minnows; Fred likes jigs. Regardless of the choice, getting the bait into the plant requires precision.

“I approach it a couple of different ways,” Fred said. “For me when I fish it by myself or with my tournament partner, we love to jig fish it. Push it in there and jam that jig up against the base of the buckbrush.”

Fred said the biggest females seem to frequent the most difficult places to reach with a jig.

“The easiest way that we’ve found to get that jig there is to push in from the side,” he said. “I’ll have that jig pulled all the way to the tip of my rod and push it in there until I get where I want to let the line out.”

Often that process involves letting out as little as a foot of line. No casting is involved. Fred holds the line with one hand, pulls the jig tight against the tip, and then releases the line when the jig gets to the desired place within the bush.

“I usually set my cork up to about two feet deep, sometimes even less,” Andy said. “Drop it in from the top and position it where you want inside the brush.”

Fred said the “slip cork and minnow” are easier for his clients to use than jigs. He adds a unique twist to his set-up, positioning a ¼-oz. split shot just above the hook. He uses a large Thill slip cork. 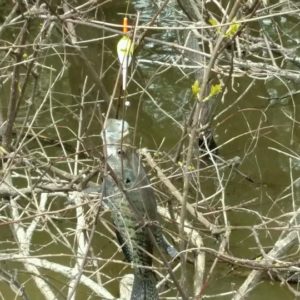 “Put the split shot right up against the hook so that minnow doesn’t have a chance to swim around everything it sees,” Fred said. “That makes it a lot easier to get out.”

The decision to use either jigs or minnows comes down to personal preference or to what seems to be producing on a particular day. Getting the fish out does not involve much decision-making. Extracting a crappie from the buckbrush basically involves sheer force.

“You have to set the hook and keep them coming,” Andy said. “Pull them straight up. There’s nothing easy about it.”

No opportunity exists for a traditional hookset when jig fishing. Fred said he hooks up by pulling on the line with his hand. The fun part follows.

“Lock that elbow and wrist and just pull,” Fred said. “If you catch it on a jig, you pull that jig to the end of the pole and starting fishing that pole back through your hands to where you can manage it. There’s no pretty way to do it.

“With the slip cork and minnow, you can finesse a fish a little more by pulling straight up. It’s a whole lot easier than pulling one out with the jig.”

Even so, losing fish is the norm in fishing the buckbrush, a frustrating part considering the fish are frequently visible when they get off.

“We lose a lot, no doubt,” Fred said. “I don’t care how skilled you are. There’s just too many obstacles and variables to deal with not to lose fish.” 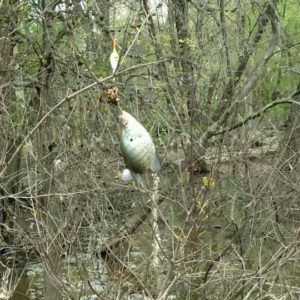 Good equipment helps with the extraction process. Andy recommends one of the longer ACC rear-seat jigging poles. Fred said his personal preference currently is the 12-foot ACC hybrid-handle model although he has used the 11-foot rear-seat extensively in the past. Fred provides his clients a 10-foot ACC rod because they generally have less experience with the longer models.

“It’s a lot easier for them to manage,” Fred said, “and I don’t get hit near as much. I get hit with a few poles now and then.”

Because of the close quarters, the heavy cover and other considerations, both recommend braid for fishing the buckbrush. Fred uses 20-lb. PowerPro hi-vis yellow.

“It’s the only time of year that I will fish braid,” he said. “Normally, I’m a monofilament guy. I like my mono.

“It’s not necessarily that you always need the braid, but it keeps me from having to re-tie 15,000 times a day with clients breaking off. I put on a light wire hook – a TruTurn #2 hook – and straighten them out with the 20-lb. braid. Saves me more time, makes the customers happy, and keeps from losing big fish in the brush.”

With decisions made about where to fish, how to fish, and with what equipment to use, both Fred and Andy emphasized the mental approach to successfully conquering crappie in Rend Lake buckbrush.

“It takes a certain mentality to really do it well, and I have about half (of the mentality) to fish it,” Fred quipped.

Despite the frustrating parts of fishing Rend buckbrush, Fred offers a point about why this type of fishing is so popular. His basic premise: the potential outweighs the negatives associated with fishing the tangled vegetation.

“The object is to catch those big females full of eggs,” he said. “For the guy who doesn’t have $5,000 worth of electronics, it gives him an opportunity at these fish. Love it or hate it, you can catch them in the buckbrush.”