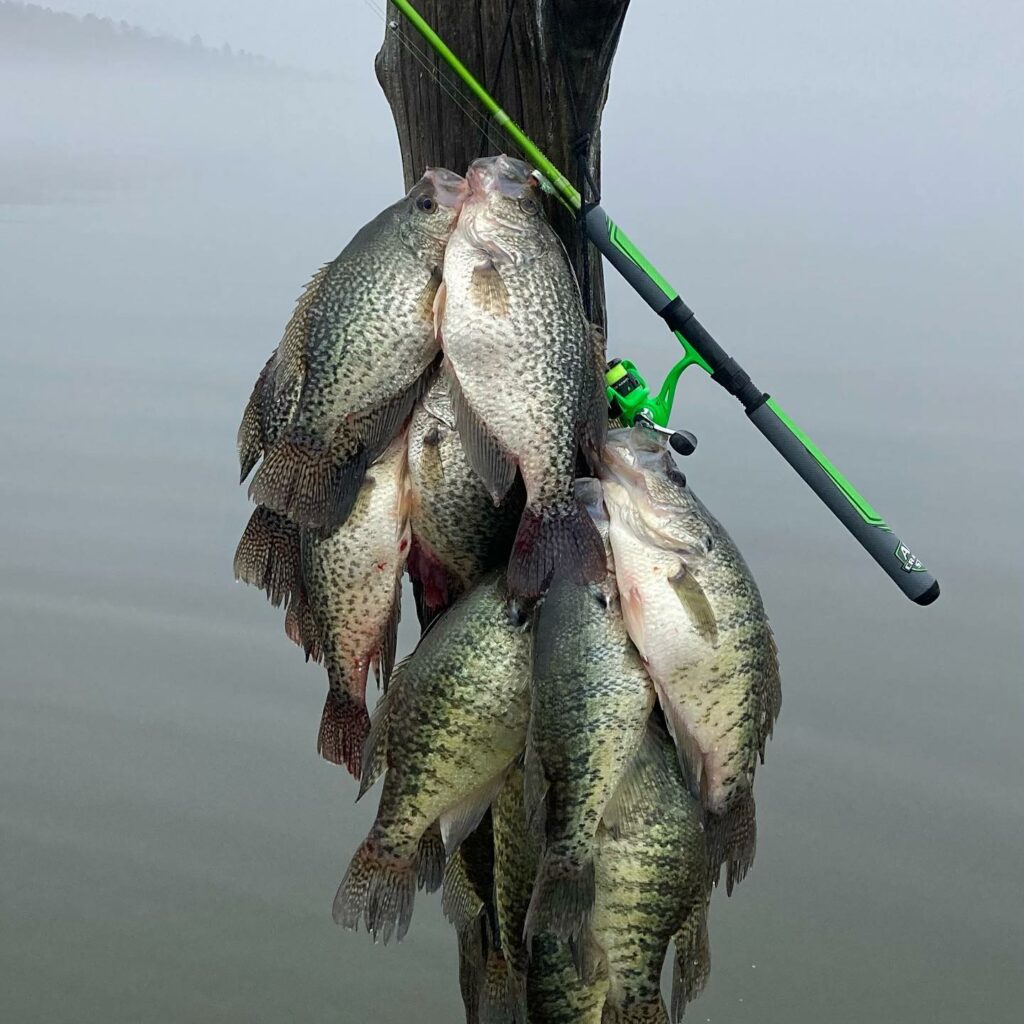 In many parts of the country, that phase of early-season crappie fishing known as the pre-spawn is in full swing.

The fish have endured — in most cases thrived — through harsh winter conditions and are starting to heed the instinctive urges of procreation, heading toward the spawning grounds. Of course, our ice-fishing brethren to the north probably get a chuckle out of thinking about the pre-spawn with most of their lakes still locked up solidly. To the south, Florida anglers have already experienced catching at least a few spawned-out fish with the first major wave of big females likely arriving at bedding areas during the current full-moon period.

No clearly defined time frame exists for the pre-spawn with periods staggered even on fisheries just a few miles apart. Regardless of what you call it, how you define it, or how you time it, the pre-spawn is here or just a few weeks away for most crappie enthusiasts across the country. They recognize it as one of the best periods of the year to fish and certainly one of the absolute best times to catch roe-laden female trophies.

We asked two members of the ACC Crappie Stix pro staff their keys to fishing the pre-spawn. If you have read this blog regularly, you already know the name of Louisiana angler Keith Acker. Let’s introduce another, Truman Lake (MO) guide Josh Jackson. Keith said the crappie in his region are already in the “he-ing and she-ing” stages, while Josh said most of the fish in Missouri are still weeks away from what he considers the true pre-spawn.

Pulling expertise from those two experienced crappie fishermen, I have developed a list of keys to greater success for fishing this stage of the spawn. Here are five things to know about the pre-spawn.

The old business adage applies to crappie fishing year-round but especially this time of the year. While some exceptions exist, the majority of the crappie population will migrate from winter holding areas, typically main-lake or main-river spots or the open water of the biggest tributaries, to smaller creeks that feature prime spawning grounds in the shallows..

Josh guides primarily on Truman Lake outside of Clinton, MO. From personal experience, he can predict where the fish will move when they start their migration, perhaps as early as late February in a mild winter but normally mid-March to mid-April on Truman.

“On Truman Lake, most of the fish will pull into the major creeks,” he said. “Those are areas that you want to target.”

For those of you fishing the pre-spawn, rely on your own personal experience to anticipate where the fish will be. If you are fishing uncharted waters, then use a paper or digital map to pinpoint likely targets in advance of a trip, making your actual time on the water more efficient.

“Those main feeder creeks are where they stage up the most in the pre-spawn,” Josh said. Josh identifies one notable exception.

“Don’t overlook main-lake river bends,” he said. “They can be extremely productive and excellent places for crappie to stack up, stage before the spawn, and feed up. They will later find areas close by to spawn.”

To continue the location motif, consider the routes the crappie take once they enter the bigger tributaries, secondary creeks, or even bigger sloughs and coves off the main body of water.

Let’s use a travel analogy. We all drive interstate systems and generally know not to pull off on the side of the road and expect to find amenities. Such a stop is most often pointless and occasionally even dangerous. Better yet, we identify the best exits that offer food, comfort, and safety. Crappie are no different.

They first travel main channels and then branch off on the best exits that provide shallow-water access eventually. In terms of topography, think channels, ditches, and contours that diverge from the main creek channel and advance fish toward spawning areas. Some might have a lip or a ledge where the fish stop and rest. Structure makes such a location even more appealing.

If food is available, the crappie may hold in and around secondary arteries for several days during the pre-spawn before moving on. These spots are especially ideal for targeting bigger females after the males have already moved shallow.

“The crappie will be using the creek channels as a highway to get back into the shallow water,” Keith said.

He added that he’s experienced some interesting phenomenom in these situations since starting to use LiveScope.

“Typically what I see — and I’m seeing it right now — is that black crappie swim around in pairs or in small groups,” he said. “I like to call it house hunting. They swim from one piece of structure to another piece of structure, just checking out where they want to be. They haven’t gotten where they are going yet.

“The white crappie — and with LiveScope we’re able to see this conclusively — are out roaming. They are not on structure. They are just roaming around about three feet below the surface of the water, regardless of the depth of the water. I actually caught fish today anywhere from one foot below the surface down to about eight feet. That’s your big females and big males. Once the water starts warming up (in March), those roaming fish will be predominantly females.” .

Both Josh and Keith talked about how weather impacts pre-spawn fishing. The time period is characterized by frequent weather systems moving through a region. They affect fishing in various ways but may not shut the bite down completely as much as once thought.

In general, Josh said stability of weather is more important than warmer temperatures, regardless if the thermometer reads 40 or 70.

The weather systems bring about conditions that produce perhaps the most important thing for Josh in pre-spawn fishing.

“One day it’s dead calm, and the next you have 15-20 mile per hour winds,” he said. “It’s hard to hold that boat still on a finicky crappie in high winds. Keeping your boat steady facing into the wind is super important to being successful, maybe my #1 key to being successful in the pre-spawn.”

Keith, however, likes foul weather. He said the conditions present on the front of an advancing system often yield quality and quantity.

“If I’m taking somebody out, I want warmer days with very little wind,” he said. “I want the trip to be memorable. We can still catch quality fish in those conditions.

“For whatever reason, the bad-weather days are good for me. I always tell people if they want to catch the biggest fish, then they need good rain gear, maybe good cold-weather rain gear.”

“I’m now mostly fishing the deepest lakes in my area,” he said. “I don’t really fish the shallow lakes as much anymore.

“Generally, I don’t think the systems impact the fish as much as once thought, especially on deeper fish. I don’t think the fronts shut the bite down as much as it may change how the fish react. Today, I had fish chasing the bait. After a system comes through, you may have to put it on their nose to get them to bite.” 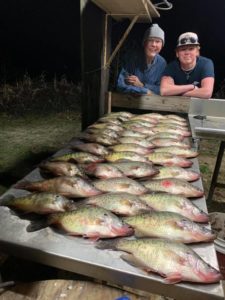 Just to confirm the diversity of fish populations, Josh and Keith take decidedly different approaches to presenting lures and bait to pre-spawn crappie.

On Truman, Josh said the fish are frequently lethargic or moody. He even used the word grumpy to characterize their attitude.

“I try to slow way, way down on most days,” he said. “I use one-oz. weights to keep my bait down and keep it still as much as possible. I want as little movement as possible whether I am casting, dipping, or spider rigging.”

Dipping was a new term for me, but Josh explained it as nothing more than vertical single-pole jigging. He said the expression and the presentation are common on Truman.

Keith takes a decidedly different approach with Louisiana and Texas crappie. He opts for heavy, big-profile baits that create reactions.

“It may be a defensive reaction from the males, a feeding reaction from the females, or it may scare them off,” said Keith, who noted that the fish he has encountered lately are either aggressive or spooky. “It’s hard for me to slow down these bigger baits. I’m using 1/8th- or 1/4-oz. jigs. I’m going to get a reaction either way.”

Do pre-spawn and spawning areas on the northern part of the lake warm up more quickly? We’ve all heard this idea and have experienced it to a certain degree. Both of our experts agree. Before they weigh in, allow me a weather-related anecdote that solidly reinforces the point.

After the recent snow and ice storms ravaged the country — and we got our share in northwest Alabama — I was driving on a four-lane highway through a rural area. The route was characterized by a series of 45-degree slopes that ranged from a few feet up to several hundred feet high. Without exception, all of the snow and ice was gone from the southern-facing side, the north side of the east-west road, while the northern-facing slopes were still blanketed with several inches of ice and snow some five days after the last frozen precipitation had fallen. The temperature was about 60 degrees.

“Early especially, those coves on the north side of the lake are a little more productive,” Josh said. “I have several southern-facing coves that I fish regularly for that reason. There’s a little bit of a gray area there because I have northern-facing fishing areas where I can catch fish, but generally places that get the most sun will have fish show up first.”

Keith said his experiences are similar.

“Even though I believe the moon phase plays the biggest role when it comes to actually spawning, they typically will spawn in areas facing the south first. That means they move into the general area quicker during the pre-spawn.

“If a pocket pocket runs east west, I would fish the north bank first because the water may be as much as five degrees warmer.”

These five ideas are certainly not a comprehensive list of crappie fishing in the pre-spawn period. They do, however, provide some distinct details about how to locate and to catch crappie as they move toward the spawn. Consider the ideas offered by Keith and Josh. The result is likely a few more fish in the livewell and possibly a more efficient trip.

To book a trip with Josh on Truman Lake, call Bucksaw Resort & Marina (660.477.3900), located 10 miles from Clinton, MO. The call allows a Truman visitor the opportunity to fish with Josh and also to learn about the other options available at Bucksaw Resort. Book early because Josh said he makes almost 200 guided trips per year, mainly from late winter through the fall. He said he devotes most of his free time in the winter to hunting with his children. Josh’s sponsors include ACC Crappie Stix and JelifishUSA.