The Lithium vs Lead Battery Debate 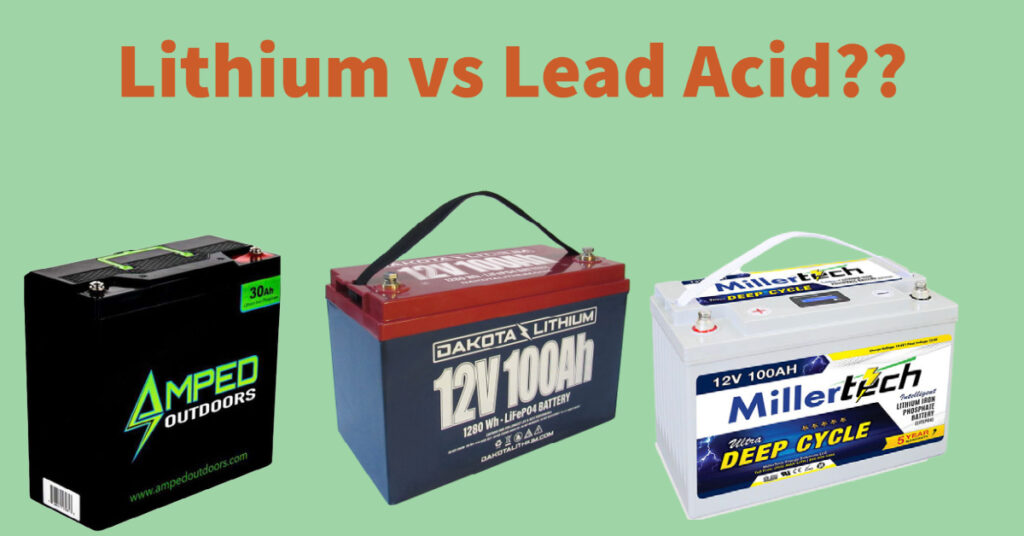 As technology advances, powering motors and electronic units at optimum efficiency remains a need for all fishermen.

Whether cranking, trolling, or LiveScoping, batteries are an important but often overlooked element in the overall success of any fishing trip. We’ve all experienced the click of a near-dead or improperly connected cranking battery.  We all recognize the loss of power of a poorly charged trolling motor battery, and we are often perplexed by the fading or inconsistent images on a fish finder that only moments before functioned perfectly.

Like many things associated with fishing, power options vary but ultimately come down to this consideration: lead vs. lithium. While that basic comparison is something of an oversimplification – many differences exist among different types of traditional lead batteries (including the AGMs) and the same is true among modern lithium models – for purposes of this discussion, we’ll keep it simple.

Keep buying and using traditional lead batteries or take the financial plunge and buy modern lithium batteries? We asked that question of pro staff members here at ACC Crappie Stix and got the typical mixed reaction about battery usage.

Many boat owners follow the if-it-ain’t-broke-don’t-fix-it approach. They have successfully used traditional types of batteries and achieved fishing success regardless of their choice in powering boats. Missouri fisherman Darin Keim fits into that category along with many other members of the ACC pro staff.

Darin powers his boat with four AGMs, one of the latest in the continued evolution of lead batteries. He said he anticipates paying about $179 each for replacement batteries at Sam’s.

“Knock on wood. I’ve not had any trouble with the batteries, not starting, the images, low voltage or anything like that.”

Darin did add another battery when he upgraded his technology to include LiveScope.

“I was worried more about interference than anything else, so I added another Duracell 31,” he said. “I was concerned about the different systems being co-mingled in any way, shape, or form.

“I can go out and fish all day, and it usually shows the battery still has 85 to 87 percent charge left in it. There are times I may forget to charge and go two or three days, maybe not full eight-hour days each time, but I still have plenty of charge left.”

“Group 20 Interstate batteries on trolling motor, group 27 Interstate on cranking and pumps, and Blue Top Optima gel cell for three head units and black box plus 360,” Fred responded. “The Optima has lasted forever, and I’ve never run out of juice for my units and sometimes will do 10-plus hour days.”

Said Jeff Barnes, of Tuscumbia, AL, “I’m running two Interstate 31s on the trolling motor and one Interstate 29 for cranking and four Lowrance HDS units. I’ve had no trouble so far. Most of the others are out of my price range.”

Cost is indeed a consideration when going the lithium route. While budget models exist, lithium buyers can expect to pay more than for top-end lead types. The cost for high-end lithiums can run into the thousands. A quick online search reveals costs as high as $3,999 although lithium models designed to power electronics don’t cost nearly that much. (Also, typical of most electronics, the cost of lithiums appears to have dropped considerably in the last six months to a year.)

The initial cost is one reason that Darin said he has never considered changing to lithiums. Fred said he has thought about making the change, adding that the reduced weight would be a positive factor when guiding a boatload of clients.

So why buy lithium when traditional types work fine for many users?

Cost and reduced weight aside, overall efficiency appears to be a main reason for considering lithium, which delivers a consistent voltage level regardless of the amount of discharge.

“I just pulled the trigger on a Amped Outdoors 48ah Lithium battery to run 1222, blackbox, and Humminbird,” said Mitch Fese, ACC’s Chief Marketing Officer. “The biggest reason for the switch was hoping for longer run times and reliability.”

On a relatively new boat, Mitch suggested he experienced some issues with the traditional batteries that came installed.

“I was out for six hours, and my LiveScope unit showed a low voltage alert around hour five. I hadn’t been running the cranking battery during that time, and it was 30 degrees out. Once I started the big motor, the voltage jumped but eventually went back down.”

Chris “Sarge” Gill (Asleep at the Reel on YouTube) found himself in need of a new battery and fully analyzed the options for a new purchase.

“Now one thing that I was corrected on last night that I never thought about is just because it is a 30ah battery does not mean that it is going to last for 30 hours. It will last for 30 hours assuming what you have on it only uses one amp per hour. With a black box and a unit, I am probably using three-five amps per hour. If I had to do it all again, I would probably get the 48, but at the same time, I fished for 2.5 days without a charge on mine before it died. It gave a consistent 13+ volts until it was dead.”

Chris said his success with the new lithium will likely lead him down that route when the time arrives to replace other batteries on his boat. He said his traditional trolling motor batteries continue to function well, but he will soon be in need of a new battery for cranking and for running his other electronics.

“I am starting to have trouble with that and keeping a charge and will go lithium at some point there,” he said. “I have not priced and compared but most likely going to go with the Amped Outdoors as I am satisfied with the one I have for LiveScope. With that said, price and comparison will or could be a reason to go with another brand but still lithium.”

Many fishermen are like Chris. They still use lead batteries for certain tasks and lithium for others. Kennieth Pierce (Hook City TV on YouTube) is another pro staffer who has added lithium to his lineup.

“I just added the Amped Outdoors 48ah lithium battery, running the gps map 1222, blackbox, and Humminbird Helix 10 Gen2 on it,” he said. “I’ve had it out a few times, and I’m happy with the performance.”

Specifcally, Kennieth needs his electronics working at peak efficiency at all times in order to produce his digital content.

“I wanted the assurance I could fish a full day and not deal with major power drops,” he said. “In the past my lead acid batteries would get weaker over time before eventually failing. A lot of times those failures were on the water.

“As a full-time YouTuber I need to be able to record my content with all my boat electronics in good working condition.”

Kennieth considered various options but spoke with friends who recommended Amped products. He has not been disappointed.

“Based on my electronics set-up, a 48ah lithium battery from Amped Outdoors would last me all day plus more,” he said. “And it has proved to do just that. Fishing for a day, I start at 16 volts and usually finish off the day around 15.0 volts, leaving more than enough power for the next day without re-charging.

Kennieth added that he would consider using lithiums when he replaces his trolling motor batteries, significantly lowering boat weigh in the process.

First-time buyers need to be aware of charging lithium batteries. Higher priced models include a charger as part of the bundle, but others require a separate purchase with the cost about $25 up to several hundred. While a traditional charger might initially work, most manufacturers claim that they damage lithium batteries. Most often, use of a lithium-specific charger is required to maintain any warranty.

A good warranty is a consideration when purchasing lithium. Some run as long as 10 years or beyond, which ultimately suggests the cost per cycle/charge of a lithium may be lower than for a traditional model. Manufacturers – in addition to Amped and Dakota, Tracker, Chargex, and MTech are among the other major brands – know their products and would never include such an extended warranty if the product couldn’t back it up.

Regardless of the type battery that users choose to buy, Darin offers a final tip that will make any purchase more cost efficient. While he is talking about electronics in general, he includes batteries as part of the overall concept.

“We get in such a hurry to get them on the boat and get on the water with it,” he said. “People don’t take the time to do a good install. They just hook it up to whatever power they can get to, and they say, “I’ll fix it right later.’ Well, we know how that goes.”