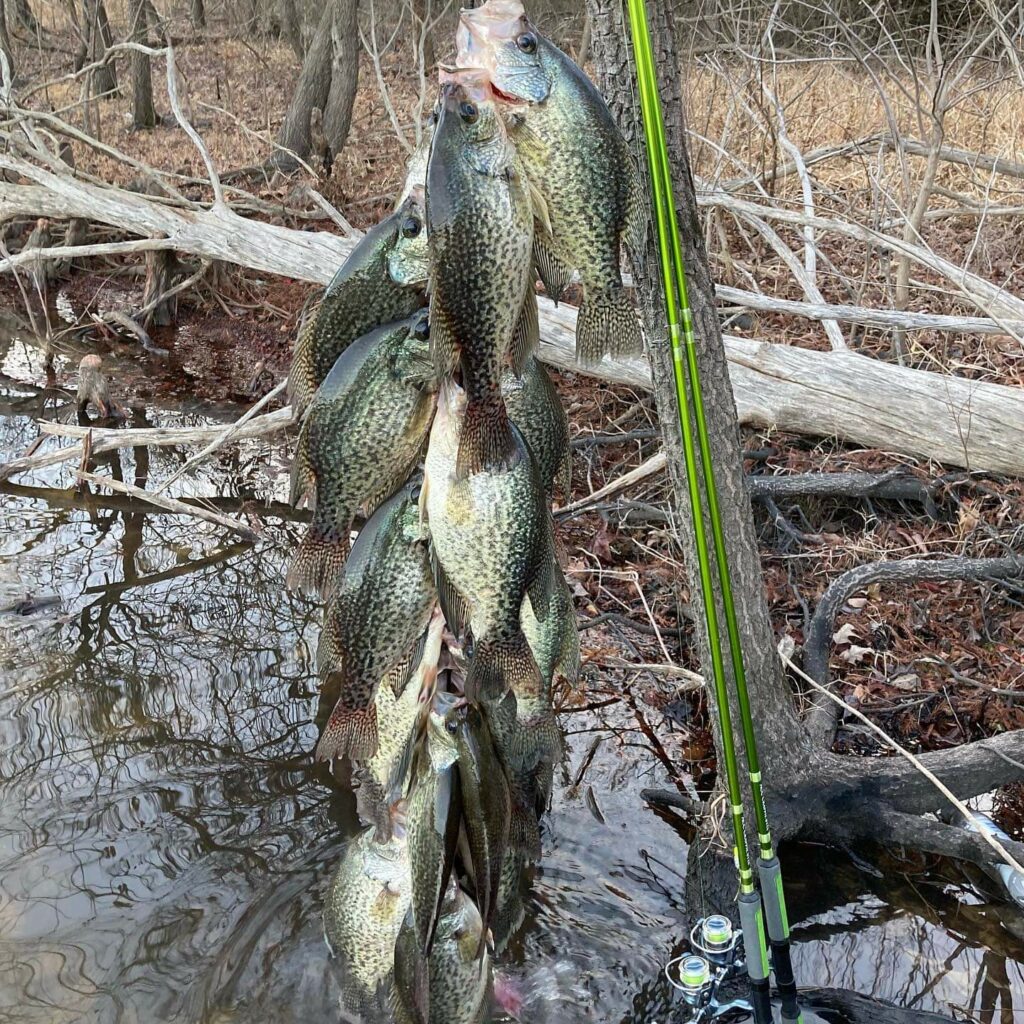 Louisiana angler and ACC Crappie Stix pro staff member Keith Acker turned on to the potential of LiveScope technology just over a year ago, and the move prompted some productive changes in his approach to crappie fishing.

Keith experienced the initial skepticism when Garmin released the new technology in the summer of 2018. He recalls, at least somewhat jokingly, going through the “LiveScope-is-cheating” discussion with a relative after he and many other fishermen began using it.

“We made fun of it,” he said, “but I was already using it and catching limits of fish. But I wasn’t using it like I am now on timber. I didn’t fully realize its potential. I was fishing for fish in open water, easier to see and easier to figure out.

“I remember the day that I had my ‘ah-hah’ moment, and I got in the truck and called my cousin. I told him, ‘hey, cuz, I’m a cheater. I’ve got it figured out and I can’t forget what I know’.”

“The first time I saw LiveScope I was amazed but I was also overwhelmed, definite information overload,” he said. “You are seeing so many things that you didn’t know were there and trying to analyze what you are seeing.

“I didn’t have anybody to teach me LiveScope. I am self-taught. It took me four or five trips to actually get it dialed in to where I had a basic understanding of what I was seeing, and I’m talking eight- to 10-hour days, 40 to 50 hours to where I was beginning to catch fish consistently based on what I was seeing.”

As previously referenced, Keith said it was time to call his cousin and confess when he finally came to the realization that he had mastered at least most of LiveScope.

“I still learn something new just about every time out,” Keith said, “but once you get it dialed in, you have those ‘ah-hah’ moments when you catch a fish and know why you caught that fish. You realize, ‘I’ve got it.’ When that happens, it’s about as sweet of a feeling that you can get while fishing. It’s one of those moments when you realize things are about to be different.”

“The thinking is that crappie always feed up because they have eyes on the top of their heads and can only see above them,” he said. “They can’t see a bait below them if it’s already below them. With LiveScope, you will see on almost every trip that if you pitch to a tree and (the jig) falls, a crappie at the top of the tree will turn and dive bomb straight down to it and grab it.

“They will chase down. They may not feed down because they just can’t see it. The first time I noticed it, I said, ‘well, that was a lie.’ But there is still some truth to the idea that they don’t feed down.”

“When you pull up on a tree and it’s got fish all up and down it,” he said, “you typically want to target the top fish and work your way down. That way you don’t spook the fish, at least you possibly don’t spook them.

“If you drop on down and catch a fish with other crappie on top of it, then you stand a good chance of spooking them pulling it up. Pull another crappie up through them, and those fish on top of the tree will likely disappear. Pick them off one fish at a time if possible.”

“When you release a bigger fish, it will swim back to that same structure that it was on, and a lot of times it will educate those other fish to where they will not bite or they will swim off,” Keith said.

Keith is unsure about the exact communication abilities of crappie, but his experiences tell him that they do communicate. He uses a football analogy to describe the situation.

“I have seen fish swim down when you release them or when they get off the hook, and they get together in a huddle like football officials reviewing a call,” he said. “When they break the huddle, the whole school will just like swim off after that one fish has told them what’s going on up there on top of the water.”

Keith has nothing against catch-and-release. He’s just not prone to drop fish beside the boat immediately after catching them.

“When you see fish scattered, you can’t always tell if they are whites or blacks,” he said. “Blacks tend to cluster up a little more while whites spread out in areas that I fish in the same type of structure.”

If he sees a cluster, his approach or lure selection may require some refinement. Unlike white crappie, black crappie may not always bite his first offering.

“Blacks can be a whole lot more finicky,” he said. “They are harder to get to turn on to bite. Get one to bite and sometimes it turns on a feeding frenzy. Usually if you get a bait in front of a white, it’s going to bite it the majority of time.”

To learn more about crappie fishing in general, find Keith on Facebook. He shares pictures and information from most of his trips, and he’s almost always willing to share the new lessons he has learned from LiveScope. He’ll help you “cheat” and put more fish in the boat.