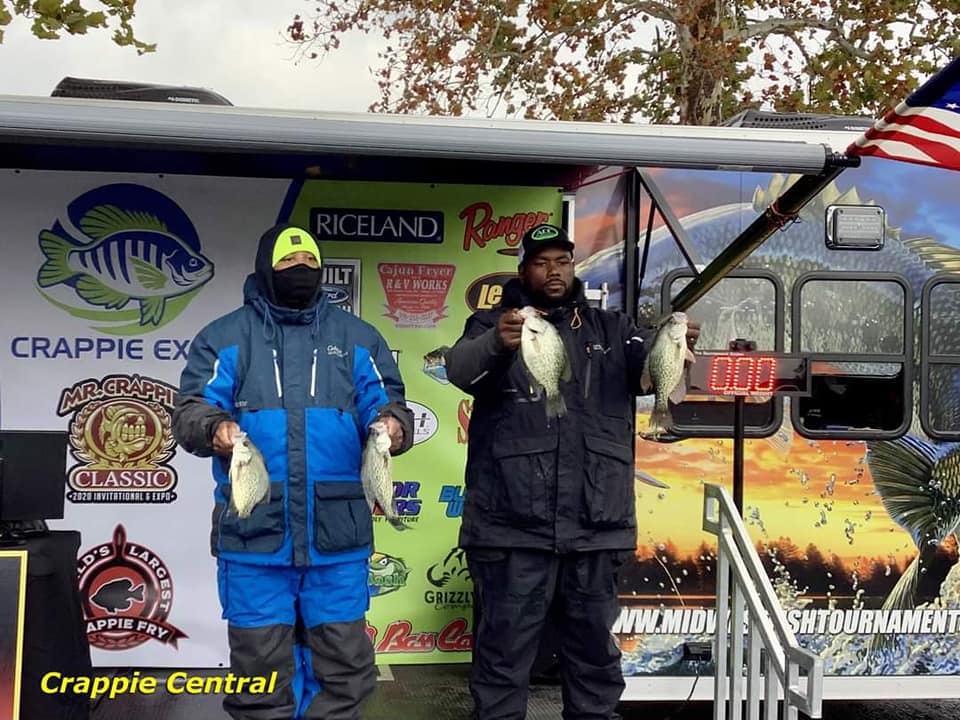 The Wally Marshall Mr. Crappie Classic and Crappie Expo, held in late October in Branson, MO, brought together the best and the brightest in the crappie world.

Both competitors and products were on display. While the weather dictated horrible practice and tournament conditions on Table Rock Lake, the Expo was a showcase of everything offered to crappie fishermen.

ACC Crappie Stix owner Andy Lehman was there touting his products in the Expo, and sales of the green rods were brisk.

“When people got their hands on the rods, they wanted one,” Andy said.

The business end took a backseat to other matters, however. Andy left Branson with a new-found respect for members of the ACC pro staff.

“I’m not sure I have the words to describe it,” Andy said. “It’s amazing what I heard there. I knew we had high-character guys on the pro staff, good people, but the way they put God out there front and center was special. They showed that they weren’t just crappie-centric people. They really made me think.

“It wasn’t just that though. The support for each other and the honesty and the integrity of them individually were other things special for me to see. I had never met some of them face to face. Just to meet them at the Expo and to get to know them a little better was great. They are not just people out there posting crappie pictures on Facebook.

“We may not have won the tournament, but there were so many successes throughout the week.”

Among ACC pro staffers, Texas guide Les Milligan led after Day 1, and Alabama guide Jonathan Phillips also advanced to the second day of the three-round event. Craig “The Crappie Cowboy” Nichols also fished. However, it was the team of Kennieth Pierce and Kyrion Washington who moved the crowd at the final day weigh-in.

The Texas team, from the Dallas/Fort Worth area, hung around the top 10 most of the week, but eventually settled for 22nd place among 25 final-day teams. Kennieth described the fishing as “tougher than a two-dollar steak,” just one of many memorable one-liners he delivered on stage during the final weigh-in and in subsequent interviews.

“Jesus is my sponsor,” Kennieth told the crowd, which was visibly moved by the comment.

Delivering that line was a major breakthrough for Kennieth. The YouTube sensation – his Hook City TV has over 61,000 subscribers – was one of the first people to promote ACC rods years ago, even before he had an association with the company.

Kyrion actually received the invitation to fish the tournament and chose Kennieth to fish with him.

“I told my partner, “there’s a testimony here at Table Rock’,” Kennieth said. “We had a few obstacles to overcome. I prayed to God, ‘just let me get on that stage (for the final weigh-in).’ Everywhere we turned, it seemed like there was something trying to keep us from getting there.”

Part of it was the weather. Kennieth found himself soaked and chilled to the bone after one of the first practice days.

“I thought I was prepared,” he said, “but the sheer magnitude of the weather was unbelievable. My rain gear was good for the wind and the cold, but it wasn’t waterproof like it was marketed.”

That meant a $600 trip to Bass Pro Shop. The new rain gear made for more comfort on the water, but the run of bad luck for Kyrion and Kennieth didn’t end.

“We had found a few fish on the final day of practice, and we had to be off the water by 3 o’clock,” Kennieth said. “At 1 o’clock, our trolling motor broke down.”

They called a marine dealer and were told that the part needed was available. When they got there, however, a mechanic told them he had put that part on a boat earlier in the day.

“My buddy put the greatest positive spin on it. He said, ‘don’t give up. God still has something for us here. We can’t start worrying about it now.’ About that time, a guy comes walking around the corner with just the part we needed in his hand.”

He was headed to put the part on another boat, but when he heard that Kyrion and Kennieth were fishing the tournament, he told them the other boat could wait. A short time later the trolling motor was repaired and ready to go.

The team caught enough fish on Day 1 for eighth place and followed up with a consistent Day 2 to jump up the leaderboard.

“On Day 3, I was a little nervous, and I thought about something. I had prayed to God, ‘just let me make it to that stage, and I will give you the glory.’ It hit me that we had already made it to the stage. There was no reason to put any pressure on myself. We prayed just before we blasted off and said, ‘Lord, let your will be done.’ I found my peace. We just went fishing.”

The final day proved even more difficult than the previous two.

His words of faith and testimony moved some in the crowd to tears. They were greeted backstage by Wally Marshall’s wife, tears streaming down her face.

Even though Kennieth had experienced a great final day – various family members had arrived in Branson to share the moment with him – the best was yet to come.

“I got back to the room, and a guy hit me up on Facebook,” Kennieth said. “He told me that he was contemplating ending his life that night. The guy was scrolling through Facebook and just happened to click on the Mr. Crappie tournament weigh-in live.

“He told me, ‘you and your buddy were on stage, and I heard the words that you guys spoke. I’ve decided that tomorrow I will go to church with my mom, and rededicate my life to Christ so that I can have an impact on someone else just like you’ve just done for me.’

“On a day when we dropped down to 22nd place, all those spots, I told myself that if I was able to influence one soul toward Christ, that was better than any crappie trophy I will ever win in my life.”

Other ACC Crappie Stix pro staffers experienced some of the same frustrations as Kennieth and Kyrion.

Les Milligan knew he and his brother had a decent string of fish but found himself atop the standings after Day 1. He wasn’t prepared for what he encountered on Day 2 after a long run up the Kings River on the west end of Table Rock Lake.

“We made a 65-mile boat run and found our place totally covered up with logs,” Les said. “We couldn’t even get close to where we had caught our fish in the first day.

“Conditions had been the same all week long, but it was like someone cut down a forest and tossed the logs in the river.”

Les moved on a secondary spot where he had caught a few fish the first day, only to find it also covered with logs and debris.

“We got close to that spot, but where we caught the fish the day before was totally covered up,” he said.

He finally located a good school of crappie in a treetop, watched one fish eat his jig, and “the school exploded like a covey of quail.”

“We found out later that another team had pounded on those fish the first day,” Les said. “I caught that first fish and that was it.”

A difficult situation called for drastic measures. Les made another long run, about 40 miles, to fish a dock in the James River arm of the lake, only to find other competitors already there.

“There’s 2,000 docks on that lake and what are the chances of another team fishing it,” Les said.

Even those experiences didn’t rival the week of another ACC pro staffer, Don McClish.

“I messed up” was the simple way that Don characterized the situation.

“We had gotten in the area on Saturday, couldn’t get a signal to get our license, and decided to drive on in to Branson,” Don said. “We looked around for a little while and then headed back out to the lake.”

Don and his father didn’t fish that afternoon, instead spending an hour or so scouting. He soon discovered a problem when he returned to Branson.

“I was actually looking at e-mails for the location of the banquet,” Don said.

He came across a date that immediately caused him to do a double-take. The e-mail listed Sunday, Oct. 25, as the start of official practice for the tournament, ending a lengthy off-limits period. Don and his father had scouted the lake on Saturday, Oct. 24.

“I told my dad, “Dad, I’ve messed up,’ Don said. ‘We weren’t supposed to have been on the water until in the morning. We’ve got two options, look the other way or make a phone call to Wally.’

“Option one wasn’t an option. I called Wally.”

Wally apologetically had to disqualify the McClish team for the violation of the off-limits rule.

“A thousand times I’ve wished that we had just gone back to the room (on Saturday) and called it a day,” Don said.

He contemplated packing up and immediately going home to Oklahoma, but Wally had encouraged him to stay during their phone conversation.

“He told me, ‘you made a mistake and owned up to it,’ Don said. ‘You will be rewarded more for doing that than if you had won the tournament. What you did will show the people of Branson, your followers out there, and the other tournament competitors that you are a stand-up, honest guy.’ That motivated me to stay more than anything.”

Wally even asked Don to speak about the unfortunate situation at the banquet.

“Ironically enough, I’ve driven halfway across the country to fish for $500 and here we have a tournament worth $80,000 and I messed up.

Don made the most of the week. He and his father fished a little, and he also helped Andy out in the Expo booth. Keith Acker and Goose Gutzman were other ACC pro staffers who didn’t fish the tournament but volunteered their time in the ACC booth as well.

The 2020 event is history except for the memories, many of them unrelated to actual time on the water.

“This year’s event was incredible,” Les said. “The city of Branson was wonderful, and the lake is beautiful. Wally Marshall really did a great job putting everything together, and the Expo was the best thing I’ve ever seen for crappie fishing.”

The 2021 tournament and Expo will be held Oct. 1-3 on the Red River in Shreveport, LA. As always, ACC will likely be well represented there.