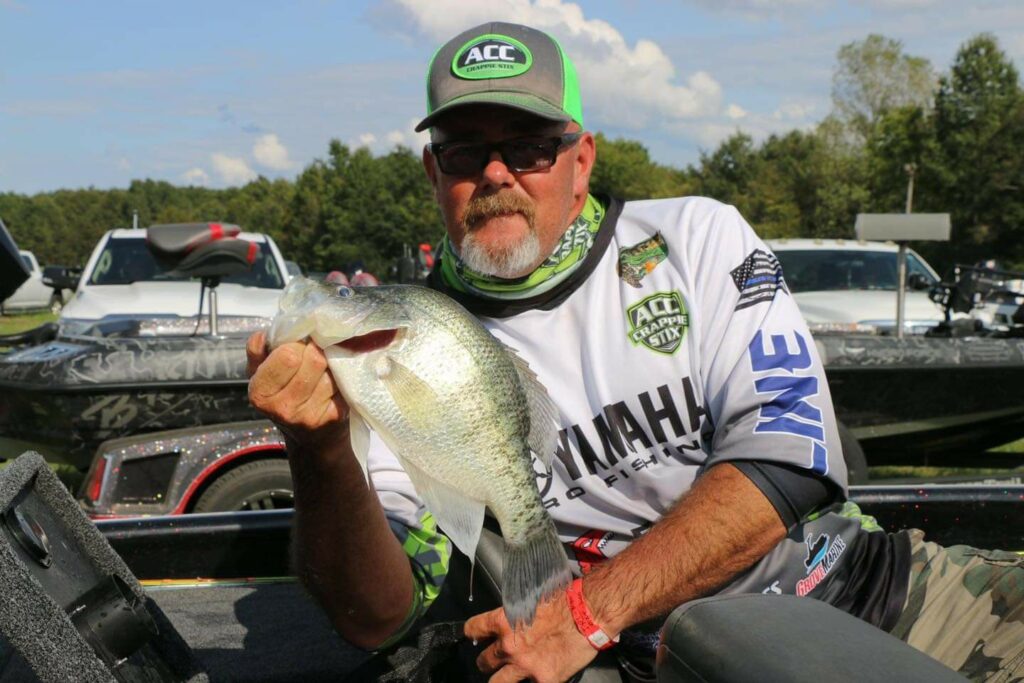 In an age of specialization, multi-sport athletes have become almost obsolete.

Craig Nichols is a throwback to a time when athletes not only competed but also thrived in multiple sporting endeavors.

Craig doesn’t perform in one of the mainstream sports. He’s not a Bo Jackson or a Deon Sanders or a Jim Thorpe from an even earlier era. Craig has reached elite status in two contrasting categories, crappie fishing and bull riding.

Craig, nicknamed the Crappie Cowboy by his peers on fishing tournament circuits and an ACC Crappie Stix pro staff member, continued to thrive in both pursuits until recently. This year, he pushed his bull-riding career to the side because of the success he has enjoyed in crappie tournaments in recent years.

Finishing third in the American Crappie Trail event on Grenada Lake in September, Craig reached another high point in an up-and-down year. He won an early tournament but also struggled at times, including a low finish in a March event at Grenada, where he and Robert Carlile had combined to win the Crappie Masters National Championship in Sept. 2019.

He owes at least part of his fishing success to his bull-riding career.

“I would say there are at least some slight comparisons,” Craig said. “Mental focus is 90 percent of the game. When you get to this level of tournaments, everybody there is a great crappie fisherman. Just about everybody there can win. You can’t let the nerves get to you and the hype. You have to learn how to break down those lakes and not let your emotions get to you. There are going to be things that happen that will rattle you. You are watching these other people catch fish and not know what’s happening. You have to be able to think and adjust.”

Some of those scenarios remind Craig of being astraddle a bull that pushes the scale to nearly a ton. The emotions run high in both sports, and the ability to channel all the thoughts and feelings in a positive way is a key to success in any sport.

“When you’re sitting on an 1,800-lb. bucking bull, if you’re not a little scared and nervous, you probably shouldn’t be doing it,” Craig said. “You have to be able to translate that from negative energy to positive energy. The same thing applies to fishing. The mental focus (of bull riding) has really helped me have success in tournament fishing.

“And both are quite an adrenalin rush.”

Craig spent 31 of his 51 years in the bull-riding business, starting at 18. A hunter and fishermen from an early age, Craig started riding bulls as a natural progression of his love for the outdoors. Craig initially spent about 15 year riding bulls professionally.

“I had a little success with it,” he said. “I wasn’t a superstar but made a little money with it.”

After marriage and the birth of his daughter, Craig moved away from bull riding for a period. His family obligations outweighed the need to compete at the time. The outdoors continued to provide an outlet, however.

“I was still hunting and fishing during this time period, fishing with some older gentlemen and they turned me on to crappie fishing (on northeast Oklahoma lakes like Oolagah, Burch, Hudson, and Fort Gibson). They were really good about it.

Despite some fishing success, the urge to compete on the bull-riding didn’t die. He joined the World Professional Bull Riding Association (WPBRA), a group for bull riders over 35. He joined the circuit about eight years ago and competed with other riders up to 60 years of age.

His focus and organization also drew the attention of the association leadership, and Craig quickly earned the title of Oklahoma state director. He helped grow the sport not only in the Sooner state but also in Kansas and Missouri as well.

He eventually served terms as both vice-president and president of the WPBRA.

“I rode bulls and fished until (2019),” Craig said. “I finally decided to give up the bull riding because I was having so much success with the fishing. I haven’t been kind to my body through the years, and fishing is isn’t always easy but it’s easier than riding a bull though.

“So fishing is the direction I need to be moving. And it’s a lot safer than bull riding.”

The national championship on Grenada capped a highly successful year in 2019. This year hasn’t been as consistently productive, but Craig made the right moves in the September ACT tournament on Grenada to suggest that good things are ahead.

Even then, the ability to adjust and deal with adversity, carry-overs from his bull riding, helped him finish high in the tournament.

Craig and new partner Dustin Ishee started their September practice sessions on Grenada in area where Craig had won the Crappie Masters championship the previous year. The results were not conducive to success in the tournament, and Craig left the past behind and moved on to another key area of Grenada that yielded quality fish the entire week.

“I went back to where we won the championship  and caught some fish,” he said, “but they just weren’t what we needed to do well on Grenada.”

He found a location more to his liking, a long, stump-covered flat in the main lake.

“Those fish have a tendency to move from the river into the main lake at Grenada this time of year,” he said. “We fished that flat for about 1½ hours and had about 14 ½ lbs with our best seven fish. We knew that we had found what we needed to be successful.”

Craig and Dustin scoped out the spot and went looking for back-up plans, returning to the flat several times each day to relocate the fish. The crappie remained in the same general area throughout the week.

“On Day 1, we had a late launch, 70th, so we weren’t sure how much pressure would be on the flat when we got there,” Craig said. “We ran across the river, and there were about three boats in the general area but not right where we wanted to fish. They were spider rigging and covering water. They really weren’t on the stump rows that were holding fish.”

The fish were there but extremely skittish. Once the fish settled down on a stump, they would bite but were super aggressive to the point that they knocked slack in the line, making a good hook set difficult. Craig said the team lost “at least five Grenada giants” on Day 1 because of the way the fish were biting, but they plugged away and stood in 14th place with 14½ lbs, a good but not great weigh on Grenada.

“I knew that we had to make some adjustments,” Craig said. “I knew better than to leave the fish that we were seeing. That’s one lesson that I have learned fishing; don’t leave good fish to try to find more fish.

“I also knew there was tremendous pressure on the crappie upriver, where most of the top 10 was fishing. In my mind, I was thinking that some of those teams had burned their fish on Day 1 while our area was relatively pressure-free.”

The key was presenting the jig to the crappie without spooking them. Instead of pitching to the fish as they did on the first day, Craig said they got out the longest ACC Crappie Stix rods they had in the boat and vertically dropped the lure on Day 2. That presentation demanded limited use of the trolling motor, so Craig drifted with the wind and deployed the PowerPole paddles to slow the boat.

The strategy worked to perfection. Winning a tournament from 14th place is almost out of the question, but Craig and partner jumped to third place by weigh-in.

They got a boost from competitors. The pressure on the flat mounted in the closing hours of the tournament. Craig had already fished through the key stump row on the flat several times during the day. As other competitors checked it out late, they began to push crappie toward Craig’s boat.

“We finally spotted a really good fish moving our way,” Craig said. “It finally settled down, and my partner pitched to it. We watched it slam the bait on LiveScope.”

A few seconds of chaos ensued. Craig normally swings in fish with the ACC  Crappie Stix, but this crappie refused to come into the boat.

“My partner was screaming, ‘I need help. I need help,’ Craig said. “It was dangling there for a moment and then banging against the side of the boat. We finally got it in, and it weighed 2.30, not as big as we wanted but about a ½-lb. cull. That fish allowed us to finish as high as we did.”

“They wanted that heavy head all week long,” Craig said. “It created a reaction bite. You could drop it down to them quickly, and they would slam it.”

The high finish was a microcosm of all the lessons that Craig has learned on both the fishing and bull-riding tours. He knew he had located the right fish. He just had to execute to make them bite, almost like a successful bull ride.

“You see a lot of (fishermen) out there, and they panic and start jumping around,” he said. “After riding a big bucking bull, there’s really not panicking about fishing.

“Some fishermen find that conditions have changed or their fish have moved slightly. They don’t know how to adjust. But you can’t win a tournament without baits in the water. Your ability to make a game plan, adjust to the conditions, and execute in these tournaments is critical. That’s not all that different from riding a bull although the (time frame) is much different.”

At least for now, Craig has become a single-sport athlete. While he maintains his love for bull riding, his body needs the rest. He will continue to fish.

Craig said the camaraderie in crappie fishing is a key drawing card for him. While rivalries certainly do exist among competitors, Craig said interaction with other anglers helps him in a variety of ways. Ever seeking to learn, Craig enjoys the social aspects of the tournament scene and the opportunity to glean new information.

That statement proves that even an old cowboy can learn to be a better crappie fisherman.

Craig Nichols lives in Locust Grove, OK. Follow him (@the Crappie Cowboy) on Instagram and Twitter and follow The Crappie Cowboy Craig Nichols on Facebook. His sponsors include ACC Crappie Stix, Yamaha, Big Bite Baits, Sunline, and Magic Dry, a cat litter company. He is also in the process of establishing a YouTube channel.

Greg McCain is a freelance writer from prime crappie country in northwest Alabama. He has hundreds of credits in state and regional print publications and digital outlets in addition to producing content for the ACC Crappie Stix blog.