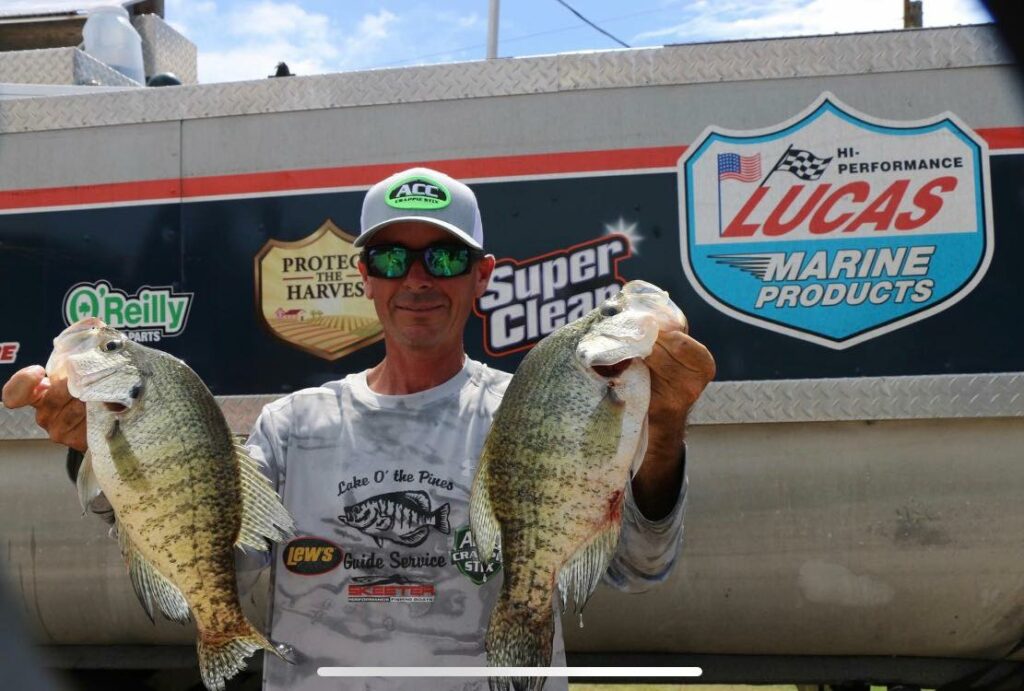 (Here’s the second of two parts on ACC Crappie Stix pro staff member Les Milligan’s debut in a national tournament, the ACT event on the Ouachita River near West Monroe, LA, in late August. In Part 1  (Not even a hurricane slows Milligan in national debut), Les relates the weather-related adventures leading up to and during the tournament. This part provides details and analysis about the fishing during the tournament.)

When Les Milligan arrived at his fishing spot on Day 2 of the American Crappie Trail (ACT) tournament on the Ouachita River in late August, he found himself all alone in an area he later described as “three school buses in a horseshoe.”

Unlike Day 1, when two other boats crowded into the tiny oxbow off the D’Arbonne Bayou, Les made the hour-long run from the launch area and settled uncontested into his productive spot, which had yielded enough fish on Day 1 to put him in fifth place despite the competition.

Now he had a chance to do some real damage, possibly even steal a win in his debut on the national stage. Experienced, talented competitors were just ahead and just behind him among the tournament leaders, but Les thought he was around enough fish to challenge for the top spot.

“I go to work,” he said. “I can fish in peace, take my time, and have a great day in there. I look on the LiveScope, and there’s fish everywhere, fish all over the place, and they’re big.”

There’s just one problem. When Les drops his hair jig on four big crappie pinpointed by his electronics, the fish ignore his offerings. None of them can be tempted to bite.

The slow start forced Les back into the pattern that produced fish after fish on Day 1.

“I started dropping on every fish that I could see, and I get seven in the livewell,” he said. “I’m getting more comfortable all the time. I started noticing this pattern that every 30 or 45 minutes the fish would start feeding and then they would go in a lull for an hour. Then they’d fire up again.”

The feeding binges ultimately provided Les with a seven-fish limit weighing just over 13 lbs. Combined with the 11.79 that he caught on Day 1, he finished with a two-day total of 24.81. While the win eluded him, Les found himself in third place when the final fish was weighed, capping a tumultuous but productive week on the Ouachita.

“My first ACT tournament. My first national tournament. It was just an exciting week, not just with the fishing but also dealing with the hurricane,” Les said. “The fishing was good, and I had done enough work in advance and while pre-fishing to give myself a chance.”

The 41-year-old guide from White Oak, Texas, was already partially prepared when he arrived on the Ouachita. Weeks in advance of the tournament, Les had used Google Earth and information gleaned from the Internet – the ACT has a no information rule – and formulated a plan for the official practice days. He divided the 110-mile-long stretch of the Ouachita into four sections, eventually settling on D’Arbonne as his best bet for success.

Even then, various factors caused some doubt to slip into his mind.

“On Day 1, when they started announcing the names to blast off, I knew them from just watching the tournaments,” Les said. “I was only No. 17 in the blast-off order, but I’m still seeing some names that I know well going south (away from D’Arbonne), and I started second-guessing my decision. I almost changed my game plan watching these guys go south.”

Les stuck with his initial plan and made the perilous run, his ultimate destination the small oxbow that barely fit three boats in it on Day 1.

“I had done my homework in practice,” he said, “and found a trick that nobody else really knew about how to run that bayou. It’s only about three boat widths wide in places and lined solid with stumps. If you mess up, you’re done. Your boat’s torn up. It’s going to be catastrophic.

“I trusted what I had learned in practice, and I was running it like no one else. I was passing boats, and I’m like, ‘I might be able to get to my hole.’ Then the other teams picked up on what I was doing and started following me. I would look back, and teams were steadily dropping off as they reached their spots.”

He credited his boat, an Fx21 Limited Edition Skeeter powered by a 250 Yamaha SHO, as providing him with the advantage of reaching his fishing grounds with relative ease. Even so, the competition was not that far behind on Day 1.

“I have a very fast, high-powered bass boat that gave me an advantage over other people,” he said. “It has a high-performance hull designed for speed and handling. Had it not been for that handling making those turns and switch backs in the bayou, I couldn’t have run it like I did. I’m in a hairpin turn and that boat is on its side. If I’d had a partner, he would have been above me at times.”

Later he added, “As I’m getting close to where I planned to fish, I looked back and there’s still two of them back there. I’m thinking, ‘Surely these professionals are not going into this little tiny spot. And I’ll be darn if both of them don’t follow me in there.”

The fish didn’t seem to mind the crowded conditions, at least those that Les targeted. One team attempted to spider rig while the other was one-poling like Les. At one point, Les said he could almost touch the tips of the rods of the spider-riggers.

The fish had moved shallower as the water rose from the flood waters left behind by Hurricane Laura, which moved through the area the previous day. Les said the spider-riggers couldn’t reach the fish that he was catching, and the competitors in the other boat never solved the puzzle of getting the crappie to bite regularly.

Les found a pink-and-black hand-tied hair jig to be the right combination. He added that a subtle trick actually provoked the bite although he kept the secret to himself for future reference.

“I’m catching some decent fish and within a couple of hours, I have a good limit in the boat,” Les said. “Once, I had that limit in the boat, the pressure was off. It was like, ‘now let’s go make it bigger.’ That’s when I changed from trying to catch every crappie in there to only trying to catch the big ones. The biggest ones, the two-pounders, I couldn’t get them to fire, to bite anything. But the crappie that were 1.5 to 1.9, I caught them.

“I ended up with maybe 10.5 lbs. by noon. I knew that I needed to stay until those other teams left.”

The competitors finally departed to parts unknown, and Les eased out of the oxbow to a nearby spot he had identified in practice. A couple of key culls there, including an upgrade of over ½ lb. on one fish – he culled a 1.2 with a 1.8 – allowed him to upgrade to his final Day 1 total.

“After I had 11.79, I didn’t want to catch any more fish,” Les said. “I elected to leave and get back early to check in. Being a rookie, I probably checked in a little too early.

“I felt comfortable that the weight was going to put me in a good spot to have a chance to win on Day 2.”

He made the same run to start the second day of competition. Because the blast-off order was reversed, he had to pass a multitude of other rigs back into the bayou but found himself fishing solo when he got there.

“I get to my spot and had it all to myself,” he said. “The team that spider rigged left the tournament. They didn’t fish Day 2. They weren’t in contention and decided not to fish.

“The other team made a decision to fish elsewhere. They were doing something similar to what I was doing but couldn’t get bit on the first day. They ended up weighing in 12 lbs. and made a big jump on Day 2. I told them later, ‘you made a great decision to move.’ They caught them big.”

Not as big as Les, however.

The water continued to rise in the aftermath of Laura, but the fish only moved a short distance back toward deeper water on the second day. He endured the slow bite early, and his patience and positive attitude proved pivotal. A 1.98 crappie, his biggest of the tournament, was the highlight.

“They would not touch the black-and-pink jig that worked the first day,” he said. “I tried tipping with a minnow, crappie nibbles. They just would not bite it.

“I started changing baits and finally got them to eat a yellow-and-chartreuse jig. I started hammering them on it.”

Les used a 12’ ACC Crappie Stix jigging rod and a Lew’s LLS50 reel filled with 20-lb. braid throughout the week of practice and competition. He also credited his Garmin LiveScope technology with allowing him to filter through the various fishes in the bayou and pinpoint the crappie.

“The fish identification on the LiveScope was a key,” he said. “I can distinguish the different species on the LiveScope, and that place is full of rough fish, gar, Asian carp, and drum. I had to be able to spot the crappie and that takes hundreds of hours of learning how to do that. That’s one reason my guiding days were important to my success in the tournament.”

When he finally decided to head back to the Forsythe Landing launch area, Les said he wasn’t even sure how much weight he had. During a 10-minute idle through a no-wake zone, he weighed his fish and came up with about 12½ lbs.

“24.81 for two days is a good total on the Ouachita based on what I had seen previously from other tournaments. The 13.02 was a big improvement over Day 1. I was tickled pink when I saw it flash up.”

Les said he was happy with the overall experience and with choosing the ACT for his first venture into national-level crappie competition.

“The ACT is a world-class organization,” he said. “Matt Morgan, Angie Morgan, and everybody associated with that organization is top notch. They knew it was my first tournament, and they walked me through where I needed to be. It was super organized. They had to be to make everything – the weigh-in, the TV show – run smoothly.”

Les didn’t say when he would be back on the national stage. Bet on him making another appearance, and other competitors should be wary about giving him a spot to himself.

He just might take the top spot the next time out.

Les Milligan operates Lake O’ the Pines Fishing Guide Service. His sponsors include Skeeter Boats, Yamaha Outboards, ACC Crappie Stix, and Lew’s Fishing. Follow him on Facebook or contact him at 903.445.6804 to book a trip on Lake O’ the Pines, Lake Fork, or Lake Bob Sandlin.

Greg McCain is a freelance writer from prime crappie country in northwest Alabama. He has hundreds of credits in state and regional print and digital outlets. In addition to the content found on the ACC Crappie Stix blog, check out his recent articles in Alabama Outdoor News, Great Days Outdoors, CrappieNOW, or the Alabama B.A.S.S. Nation website.