Why We Started and Where We’re Going – ACC Crappie Stix 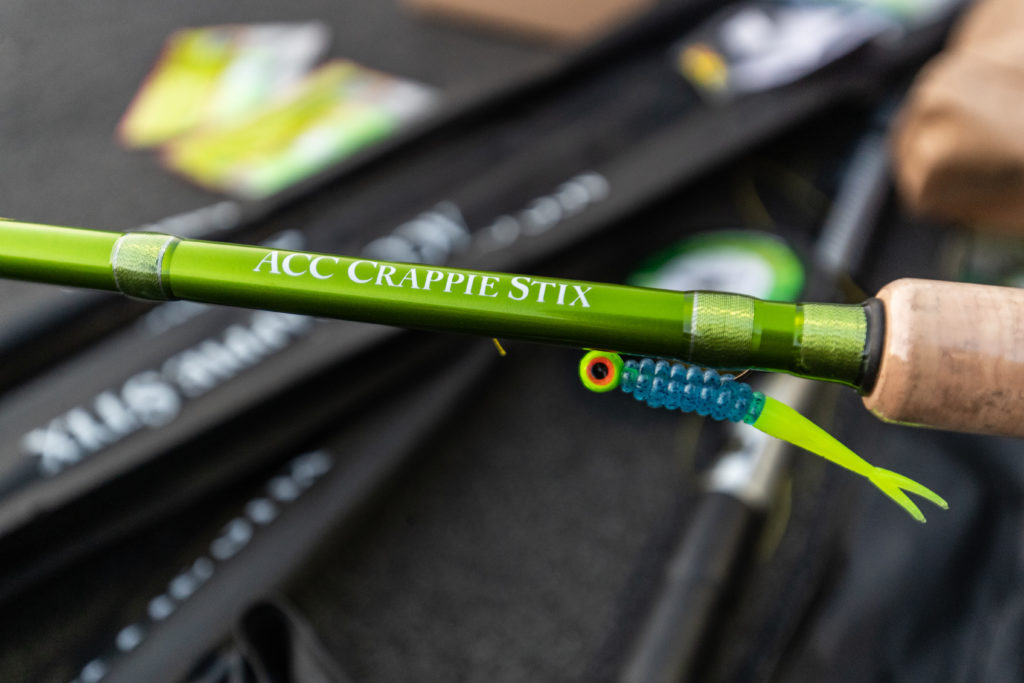 A competitive bass fisherman at the time, Andy was headed to Mississippi to fish a tournament, and he wanted to sample some of that state’s vaunted crappie fisheries while there. He borrowed crappie-fishing tackle from a couple of friends, products which in Andy’s mind were a bit underwhelming.

“I just had bass rods, so I went to a couple of buddies to borrow some crappie tackle,” Andy said. “I just remember saying, ‘Why are these so flimsy?’

“I forgot about it for a while until I started guiding, and I got to thinking again, ‘There’s got to be a better way.’ It wasn’t like the market was flooded with crappie rods. Off the top of your head, you could think of three or four (companies). Of course, there’s more than that, but there’s not 50, not 100 of them (like in the bass industry).”

The idea didn’t come to fruition immediately but was indelibly etched in Andy’s mind. Some 25 years after the initial thought, he has helped solve the problem. His company, ACC Crappie Stix, is an emerging player in the burgeoning crappie-fishing industry.

Located in Andy’s hometown of Mount Vernon, IL, the six-year-old enterprise survived some difficult early years but has steadily evolved, using a combination of innovative product design, cutting-edge marketing, and quick-response customer service to grow the brand. Andy credits all three facets as integral to establishing the “green rods” in what is now an ultra-competitive market.

The company’s expansion didn’t come easily. Andy maintained a day job until about a year ago, worked the rod business at night, and guided regularly over a seven-year period. While guiding, the idea of developing better crappie tackle came back into his mind.

He didn’t rush to the bank or solicit investors. Instead he began some serious on-the-water R&D, using a small stash of funds to ignite his venture.

“I ordered some rods and told them I wanted them stouter and lighter,” Andy said. “They told me it couldn’t be done, and we went back and forth. I moved on to another manufacturer. I finally found some of the things that I wanted.

“I boot-strapped it. I started with $16,000 that I had saved from guiding. I made my first sale off the tailgate of my pick-up truck. The invoice blew away, and I had to run into the neighbor’s yard to chase it down.”

From that initial investment of about 150 rods, the company now offers at least 22 different models, and the refinement continues with input from ACC’s pro staff and from Andy’s own analysis of the product.

Andy has the tax records to prove how much money he lost in the early years. He quips with his accountant that he looks forward to the day “when I can start paying taxes and not get money back.”

Actually 2019 proved to be a pivotal year in that regard. Andy had earlier quit guiding to commit more time to the rod business, and he finally left his day job last fall. Sales began compounding exponentially as crappie fishermen responded to ACC’s unique product.

“We’re doing things other companies are not doing like the grips,” he said, “super grips we call them. They are on bass rods but not on any crappie rods. We wanted to develop dock shooters that are not flimsy that get far underneath a dock. We wanted to create products that were not out there that people had a need for. That’s the way that you should start a business.”

Andy also brought aboard Mitch Fese, a social media advertising guru who is now a partner in the business with the title of president of marketing. Mitch lives in Chicago but has a family lake home in southern Illinois.

“He saw these green rods on the lake,” Andy said. “He wanted to put his expertise, digital marketing, to work with his passion, fishing. Now we work together promoting the company. It’s proved to be a good formula.”

Andy also realized that even prior to Mitch’s involvement that various crappie experts were touting his products.

“Most the guys came organically,” Andy said. “They were already using the rods. Somebody mentioned Ken (Pierce) from Hook City TV on YouTube. I said, ‘Who’s that?’ They said he’s always talking about using your rods. Now we work together.”

Ken is just one of several YouTubers now on ACC’s pro staff.  They include Go Fish with Charlie Burrow, Flopping Crappie with Davis Lenzen, and Asleep at the Reel with Chris “Sarge” Gill. In addition, some of the best crappie fishermen, guides, and tournament anglers in the country are part of the marketing mix as well.

“They are on the pro staff because they like the rods, not because they are looking for a discount or for something free,” Andy said. “I really like YouTube guys, and I like guides, nice guides who will stop at the boat ramp and talk. We don’t want any arrogant guys. We want approachable, friendly guys.”

As much as the product and the marketing, ACC’s customer service is an equally important dimension that sets the company apart. Andy doesn’t guarantee an immediate response to an e-mail, but it usually happens. He said the company attempts to reply to e-mails within a couple of hours.

“We’ll mail out a rod tip that day,” Andy said. “I’ve heard horror stories. I’m not going to lose a customer over a rod tip.”

“I’ve never experienced better customer service, and I’ve fished for a long, long time,” said pro staff member Jeff Barnes, of Tuscumbia, AL. “If I break a rod, Andy will have one headed to Alabama that day or the next.”

With a productive formula for success, the future looks bright for ACC. Andy said he maintains a frugal lifestyle, choosing to pour money back into the company. The cumulative effect is paying off. From the initial order of 150 rods, he is now selling them by the thousands with sales growing “200 to 300 percent” over the last couple of years, according to Andy.

The increased sales have created one main problem, a good one compared to the early years of the company. The rods are selling so fast that Andy has trouble keeping them in stock. Otherwise, ACC Crappie Stix can be found in local tackle shops around the South and the Midwest. They are also available online at acccrappiestix.com.

“We haven’t made the move (into the bigger retailers) yet,” Andy said. “There are so many small mom-and-pop stores out there, and I love dealing with them. I just got back from Tennessee. The guy there owns a small store. We had a YouTube Live event, and a meet-and-greet. We’re in about 55 stores like that.

“We also love the online potential and enjoy the marketing for it.”

Andy has been part of the change in the crappie market over the last few years, and he said ACC will continue to meet the demands of the crappie community.

“We’re going to keep doing things that we don’t think other people are doing,” he said. “We’re focused on innovation and quality. That’s something that hasn’t been in the crappie industry. It is now.

“Think about what crappie fishing was like not that long ago. It used to be a cane pole. That’s what they had 20 years ago. Now they want quality with the rods, the new grips, the higher quality graphite, the LiveScope, and other electronics.

“We can’t stand still any more. We have to keep moving and evolving.”

Greg McCain is a freelance writer from prime crappie country in northwest Alabama. He has hundreds of credits in state and regional print and digital outlets. Check out his recent articles in Alabama Outdoor News, Great Days Outdoors, CrappieNOW, or the Alabama B.A.S.S. Nation website.