If You’re Not Dock Shooting for Crappie, You Are Missing Out 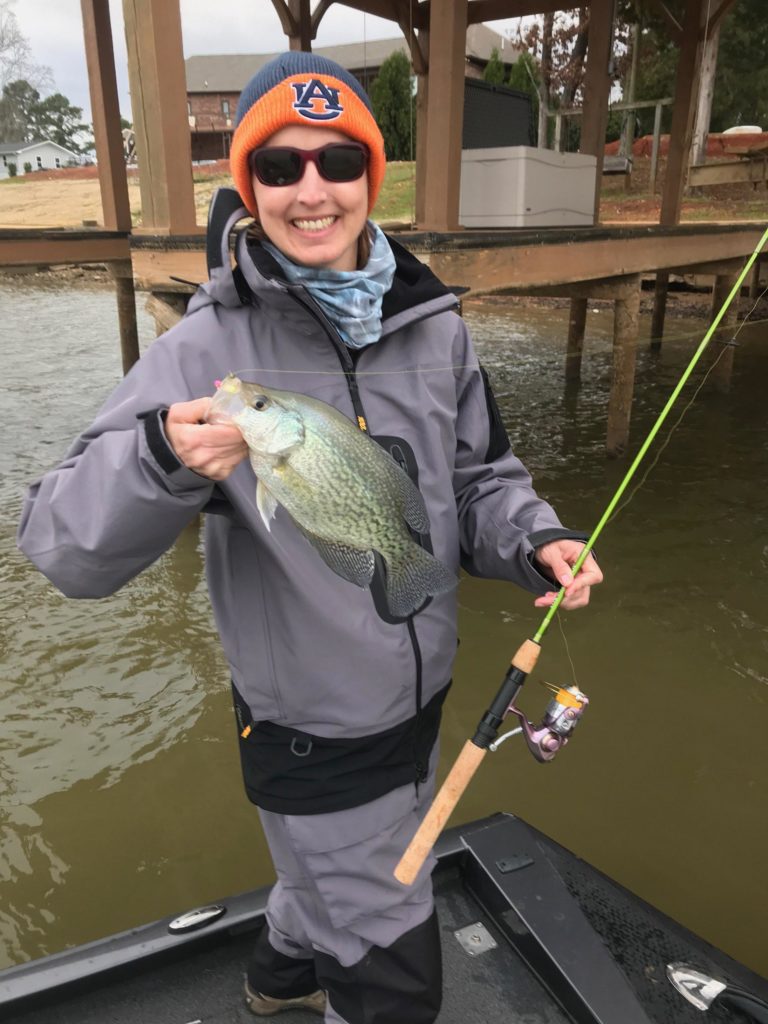 Certainly throughout the summer, docks offer crappie the cover and shade from the sun that they crave. Often—especially in the early morning will be the most opportune times to fish under docks as the fish have moved in to feed on the bait fish. If the dock is big enough and in deep enough water, they may even hang out there all day.

So, when fishing docks, what’s the best technique? You can’t overhand cast like you would most of the time. You have to find a way below those nooks and crannies to get under there.

In these situations, dock shooting is a very valuable technique to get under those docks and find the crappie hiding underneath.

What is dock shooting?

Dock shooting is where an angler locks down the line with his rod hand, grasps the hook/jig in his other hand, and pulls it back which bends the rod. Then, by releasing both the line and hook/jig at the same time, the rod slingshots back to its straight position and fires that jig in the direction that the rod is pointing. 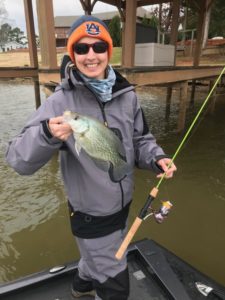 To get under those hard to reach docks, there’s no technique like it.

Here’s the thing. You’re not trying to cover the entire distance with the shot. You’re going to be holding the rod parallel to the water so when it fires, it skips the jig and jig under the dock the way you would skip a stone across a pond. That’s why many dock shooters prefer flat shad soft jigs so that they get a really nice skipping action.

The perfect dock shot is one where there’s no loud PLUNK which could scare away fish. The skipping effect keeps the noise down and seems more natural to the way a bait fish or insect would land.

You won’t be perfect in the first five minutes. It may even take you several sessions to get the basics right. However, it’s not rocket science—even if you are shooting your hooks around like rockets. You will figure it out soon enough, and then you will have a great new tactic to use when you need it.

WARNING – This is very important. When you let the jig go, it’s going to shoot out of your hand. The last thing you want is a hook traveling at that speed to go into your fingers. So, be very, very careful at this stage. The number one thing you need to do when learning to dock shoot is to really ensure that the hook has the clearance to not snag you in any way. 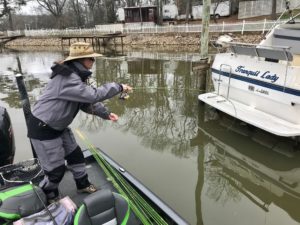 Step 1 – Hold the rod up and release the bail until the jig is about twelve inches above the reel. The key here is to do it the same way each time.. If you use the distance between the hook and the reel as your guide, then you will get a nice consistent slingshot effect that you can count on. If you find that you’re not shooting far enough, move the hook further away from the reel which will bend the rod more and give you more torque & power.

Step 2 – Grasp your jig by your thumb and index finger and curl the rest of your fingers in so they don’t get snagged when you release the hook. Some people say that you should grab it by the curve in the hook to really make sure it can’t snag you. That’s not the way I would do it, though. However, whichever way you do it, just be very careful at this step.

Step 3 – You should now use your index finger rod hand to hold the line. You want to keep your rod almost parallel with the water so you may have to get down low to shoot it under a dock. Point the rod exactly where you want the hook to shoot but keep it as parallel as possible.

This is where the timing comes in and where you’ll really have to work at doing it right. By releasing the line and the hook at the same moment in a smooth way, that hook and jig will go flying in the direction of the pole.

Have fun, stay patient, and be careful

Like casting, jigging, spider rigging or other tactics, dock shooting is a specific technique for specific situations. You may go a full season without shooting any docks. But, it’s a tool like any other tool. It’s good to have it in your arsenal and not need it rather than not having it and needing it. In some of the hottest and sunniest days, you may find that dock shooting is the only way to really catch some crappie.

Dock shooting is also kinda fun. My friends and I call our shots like we’re playing pool, with each of us trying harder and harder shots throughout the day. The good thing to remember is that the harder the shot, the bigger chance there is that the previous fishermen who passed by probably didn’t try. That means there might be a honey hole waiting for you aim and fire.

Keep trying and stay with it. You will be an expert dock shooter in no time at all. 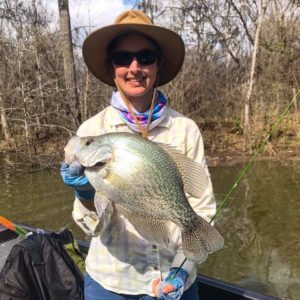