Day 5: How to Fish Lake Tawakoni for Crappie with Kennieth Pierce 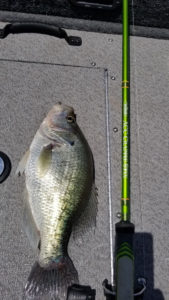 Editor’s Note: Thirty-five year-old Kennieth Pierce of Quinlan, Texas, fishes Lake Arlington in the Dallas/Fort Worth metroplex as his home lake. Pearce’s daddy started him crappie fishing when he was 5-years old. 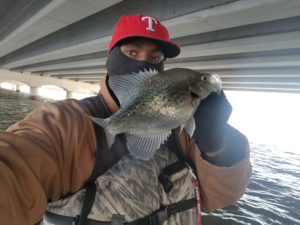 (https://humminbird.johnsonoutdoors.com/fish-finders/helix/helix). I’m looking for schools of crappie holding tight in the underwater trees. Usually, these crappie aren’t going to move, unless they get spooked. I’ve found that putting a 1/8-ounce jig right down on top of that school and getting those crappie to bite works. Sometimes, the crappie will be holding right next to the trunk or out in the limbs of the trees. Normally, I may pull two to three crappie off one tree. But every now and then, I’ll find a bigger school and be able to catch seven or eight off that tree. I like to fish for the crappie that are the most aggressive, when I’m fishing in the timber. So, if there is a big school, I catch the fish that bite first, because they’re the most aggressive. Then I may move on to another tree.

On Lake Tawakoni, we can keep 25 crappie per person. Every now and then, you’ll catch a sand bass (white bass) and occasionally you’ll catch a hybrid striped bass when you’re fishing. The biggest hybrid I’ve ever caught weighed about 8 pounds. When you get a fish that size, you’ll be glad you’re fishing with an ACC Crappie Stix rod, because those rods have the power not only to hook the fish but the strength to play it down until you can get the fish in the boat.

I haven’t started guiding yet. Numbers of people on my YouTube channel (hookcitytv) have asked me to guide, but I’ve never really considered the possibility of making a living out of guiding for crappie. I’ve had a great career working for Burlington Northern Santa Fe (BNSF) Railroad. But I’ve really come to enjoy taking other people, friends and family fishing and watching them catch crappie. So, I’ve started thinking seriously about guiding as something I may want to do on my off-days. If I guide for crappie part-time, I think that can be a really enjoyable part-time job for me. I work third shift (graveyard shift) 11 pm to 7 am. I still can guide in the 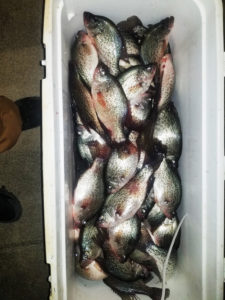 mornings, fish for 4-5 hours, and then come home and go to bed. Right now, I’m using those mornings to go out and fish and shoot videos for my YouTube channel. If I start at about 8:00 or 8:30 am, come off the water no later than 12:00 noon, I’ll still get plenty of sleep before I go to work at the railroad.

To see how and where Kenneth Pearce fishes, go to his YouTube channel at hookcitytv

(https://www.youtube.com/channel/UCdcuACQzEadZ-ihtqH28uOQ) and watch some of his videos. Most of his videos are crappie fishing, but he has several videos on bluegill fishing too.