Late Summer from a Texas Guide. 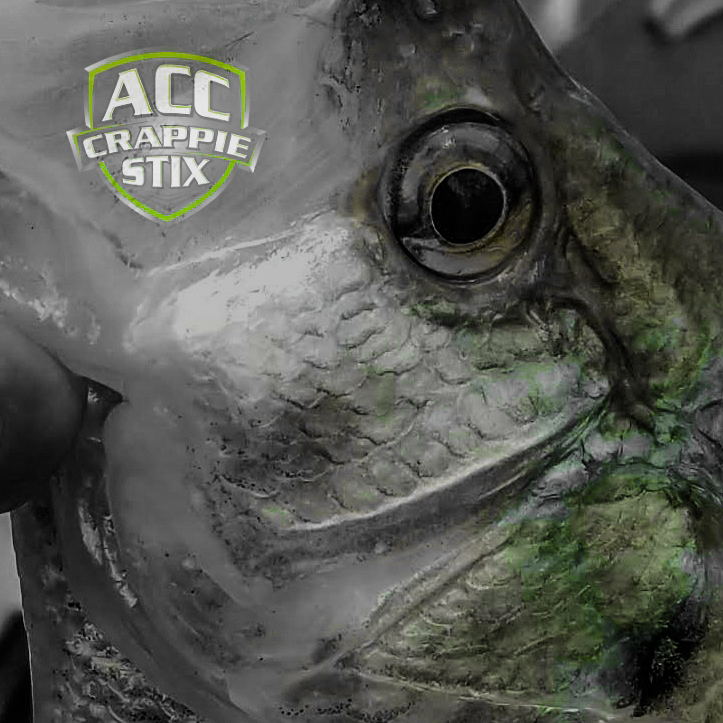 At best, everything I say or do on the water is an educated guess; I’ve also come to realize crappie can’t read. That being said, here are my thoughts on late summer crappie fishing.

With the exception of February, the month of September may be the most frustrating month for putting large numbers of fish in the cooler. I feel that the transition from late summer to fall leads to a inconsistent fishing trips, with some days being fantastic and others being less favorable. I can’t tell you the number of times that I’ll drive past a brush pile in late August/September, where there are hundreds of crappie suspended on a tree or above a brush pile, only to pull off a handful of the more aggressive fish.

Take yesterday’s trip for example. We were down at Cedar Creek, fishing main lake submerged timber, and as I’m side scanning potential waypoints, I’m pointing out to the customer what fish look like on the graph. We idle past a tree, and even a novice with very little experience using electronics could tell that there was hundreds of crappie to our right. We marked the spot, swung back around and ultimately pulled about a dozen keepers off the tree. If we were to hit that same tree in October, there’s a good chance we would’ve limited right then and there. 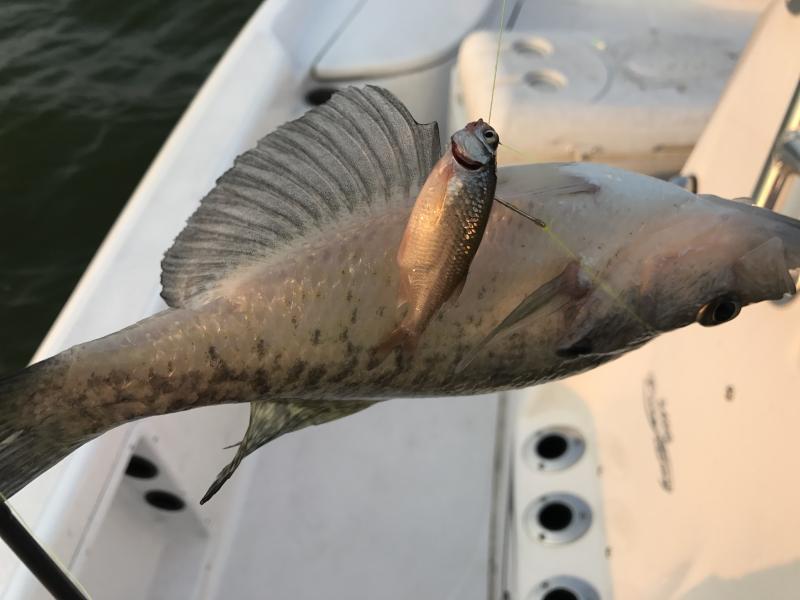 The rest of the day was very similar. No matter how absolutely loaded a pile might be, often times we would pull 3-5 keepers and be forced to move on. That to me is the most frustrating aspect about technology. Now that we can see how many fish are down there, we as fishermen know exactly what we’re missing.

What’s a guide to do when the conditions are like this? For starters, I try to run only morning trips until October. Low winds, no rain and ample sunlight often raise the surface temps by 3-5 degrees on a daily basis. Most lakes around DFW are in the mid 80s around daybreak, which is still high, but it’s better than flirting with the 90s. I feel the fish do a majority of their feeding at night or very early morning, and by the end of the day, the water is warm and their bellies are already full. 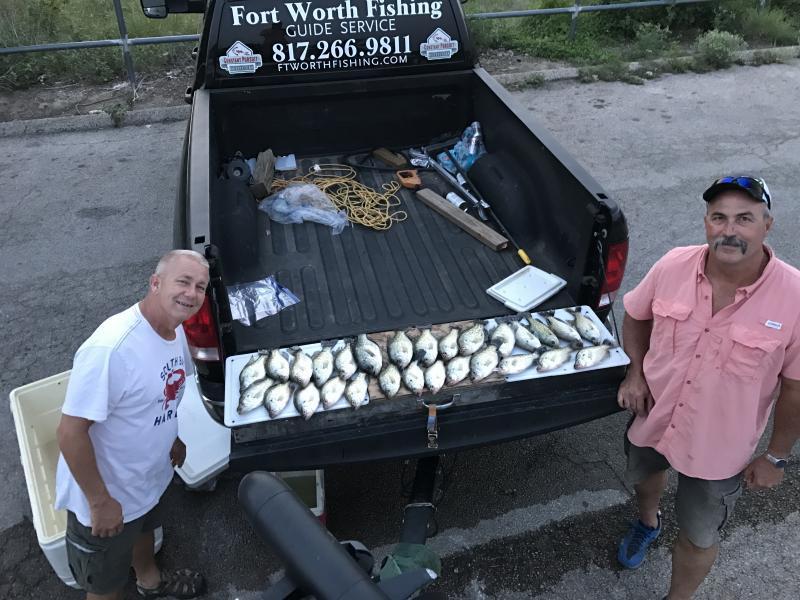 My tackle differs a lot this time of year, too. I will only tie on 1/16th ounce jigs or jig heads. If someone is new to fishing with artificial baits, I can always add a split-shot 18-24” above the jig. Whether it be a handtie or soft plastic, I’m looking to use the smallest profile bait I can get my hands on. The smaller the size, the better. I don’t get real focused on color, but that small profile is essential right now for good numbers.

The fish seem to be less picky at daybreak than they are the rest of the day. The first couple hours of daylight, I can drop just about anything and at least pull a few fish. As the day goes on though, I seem to have better luck with either feather jigs or small minnows. I know people don’t like using minnows, but pride doesn’t pay the bills.

When I’m fishing minnows, I’m doing so in a couple of different ways. One way is the traditional method of a gold Aberdeen hook with two split shot 12-18” above the hook. The other way is to take a small minnow, pinch off its head, and run the hook in the body cavity and out the dorsal fin. What you have just created is the world’s greatest jig. Fishing a minnow like this gets you hung up less, allows you to get multiple fish per minnow, and puts a lot of blood and guts in the water, which gets other fish excited. Which one to use on which day depends on the fish; try both and see which one works best. 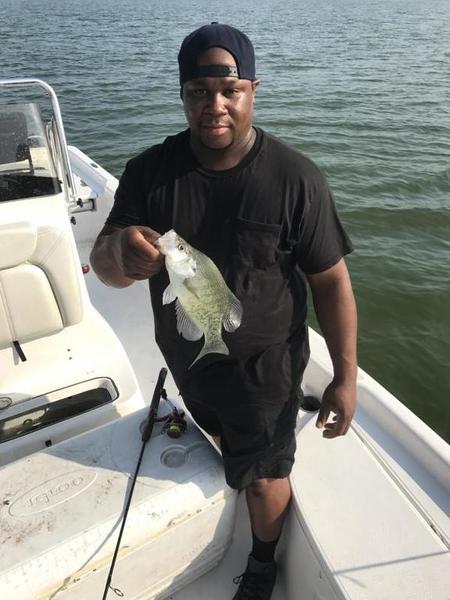 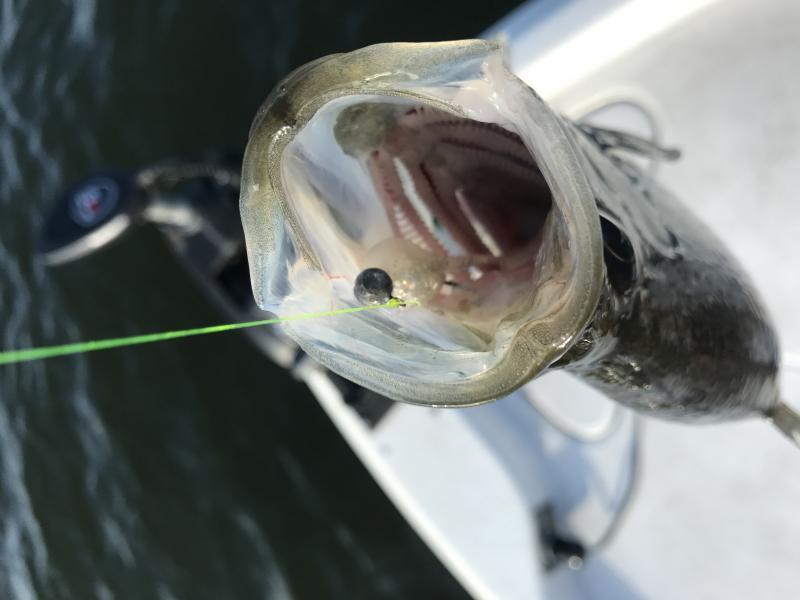 If you just absolutely refuse to use minnows, I understand. For those purist out there, a little downsizing and changes in technique should still allow you to enjoy success. Like I said earlier, at daylight, they will hit both plastics and feather jigs, as the day goes on though, they really seem to do better on the handties. I’m using a 1/16 ounce solid chartreuse feather jig with a #6 hook on sunny days, and on cloudy days I’m using a ghost colored gray jig. I don’t know the names of them, but they are made by Slab Syndicate.

As far as technique goes, this is one area of my job that becomes much more important. Teaching someone to catch fish right now is not easy, and if I’m having trouble feeling the bite, I know most of my customers are too.

When we start on a new pile, I will typically pitch out alongside the structure, trying to get a few of the more active fish out the way. I like dumb, hungry crappie. After we pull the first few off, the real jigging begins. The number one mistake I see being made right now is too much movement of the rod, and the rod being moved too quickly. Most of the crappie right now have about as much desire to eat as kids do for going back to school. The fish are lazy, and therefore must be fished for in an unnaturally slow manner. If at any time someone has slack in their line as they are lowering their jigs, they are moving too fast.

Line watching and other methods of detection (such as having your finger on the line) are essential right now. At least in my experience here lately, very rare is it when a crappie will give the angler a good hard thump. More times than not, the line will go slack, the line will twitch, the line will move to the side, the pole might feel a little heavier or it might feel lighter. If I feel any shift in weight at all, I’m setting the hook. As I tell my customers: “hooksets are free.” 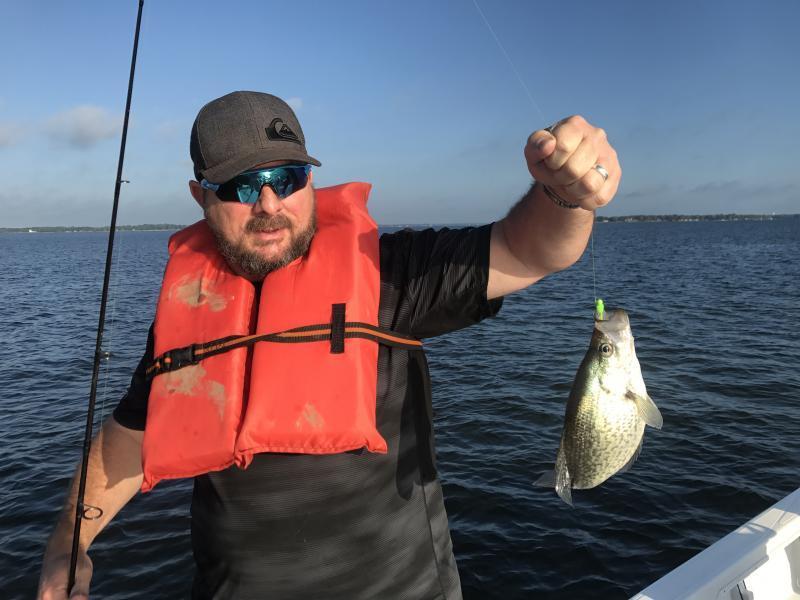 As far as depth goes, I’m fishing where I would most times of the year, but the active fish seem to be at different depths as the day develops. I’ve been starting my days around 8-12ft, and ending them around 18-22ft. Even if I’m fishing in 25-30ft of water, I’m still finding my daybreak fish ready to eat in the 8-12ft mark. That goes for both the west side and east side of DFW. As the day continues, I’m in 12-18ft by mid-morning, and will finish off in 18-24ft by noon. Even though I’m still marking a ton of fish in 10-15ft, the deeper ones seem much more aggressive during the middle of the day.

My go-to spots this time of year are those that offer a lot of change in depth. For example, if I find a brush pile on a main lake hump or creek channel, and that depth ranges from 9ft at the top of the ledge, to 22ft at the bottom of the ledge, I seem to do better on that spot than I would on your typical brush pile built on a flat somewhere. I think the fish like the option of moving up and down as both daylight and temperatures increase. My favorite spots right now are trees in the middle of the lake. Submerged timber allows the fish to move up and down as they please, while still relating to structure. 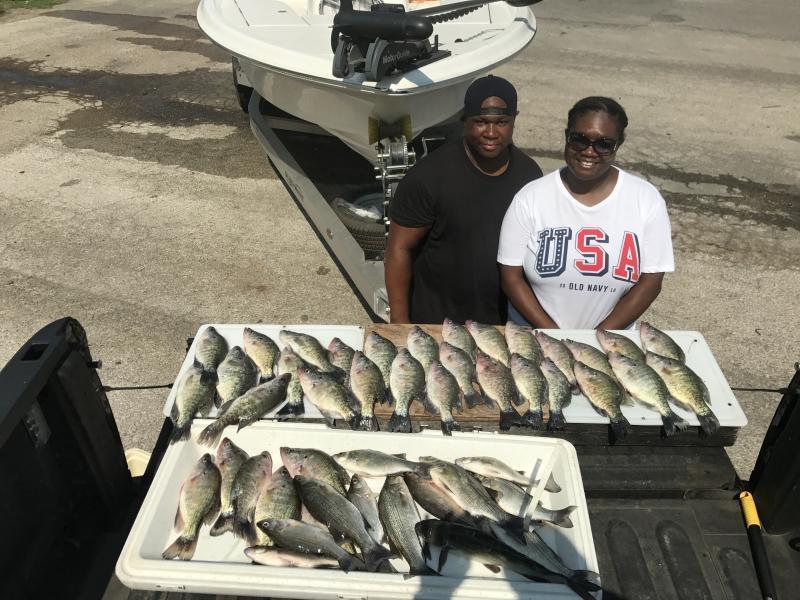 Lastly, I’ll change baits a lot more often that I usually do. My typical procedure here lately is to have a few poles rigged for different types of presentations. I’ll have a couple poles rigged with hair jigs, a couple poles rigged for live minnows, and a couple poles rigged with plain, unbaited jig heads. Leaving the jig heads unbaited allows me to switch from plastics to pinched head minnows very quickly. I’ll start with either handties or plastics, while my other customers might fish a pinched head minnow or live minnow. If one presentation is obviously outperforming the others, I’ll switch everyone over to that style of fishing. Here lately though, some fish prefer jigs, while others prefer the minnow. By having several different options, we can keep the bite going, and get as many fish as possible every time we stop.

I hope someone finds this useful. I don’t dread the late summer bite as much as I used to, but I’m still fully aware that I can be humbled at any moment. Whether you’re in east Texas or the west side of Fort Worth, the information above has been tested to the upmost extent by a guide who is still learning something new every time he hits the water. Good luck everyone, and I hope to see you on the water this fall! 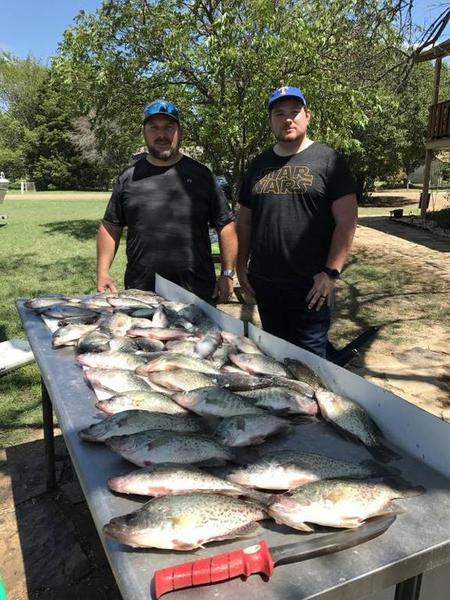 I really wanted to give a big “Thank You” to Lane Palmer from “Fort worth Fishing Guide Service. I caught this blog on Facebook (also on the Texas fishing Forum) and shamelessly asked if I could kindly steal it. He said “sure why not”. What a guy right! So do him the honor of checking him out if you’re in the area and need a good guide. Thanks Lane we sure do appreciate the great content. All of his info is in the picture above on the back of his truck. See ya and remember to take those crazy kids fishing! Andy Lehman