Day 5: How and Why to Crappie Fish at Clinton Lake in Early Spring 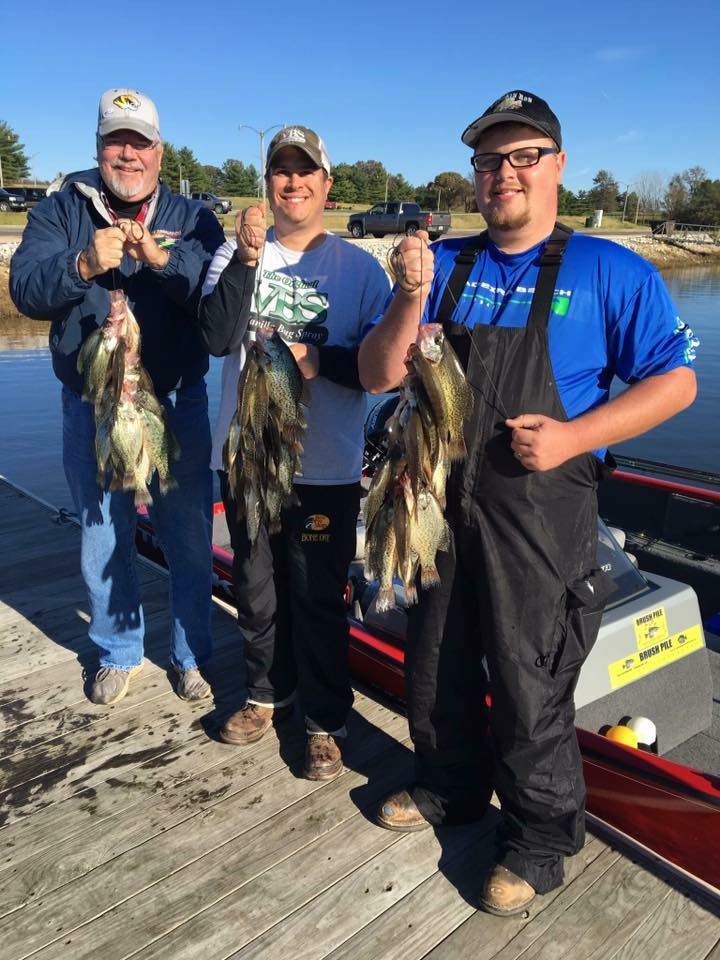 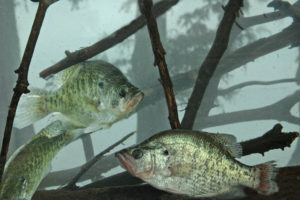 Editor’s Note: Twenty-seven-year-old Reagan Smith (Reag’s Guide Service) of Tremont, Illinois, says he’s been crappie fishing forever, and he’s been guiding crappie fishermen for the last three years. “All the lakes I fish are more or less in Central Illinois. I guide on Lake Springfield in Springfield, Illinois; Sangchris Lake near Rochester, Illinois; and Clinton Lake in Clinton, Illinois.”

Like the other two lakes mentioned earlier in the week – Springfield and Sangchris – Clinton Lake is also a power-plant lake with a warm-water discharge. I primarily fish Clinton Lake in the spring – from March through June. Clinton Lake has sunken brush everywhere. It’s only about 4900 acres, and I use my drop-shot technique with minnows to fish those brush piles. I also fish with slip bobbers, and we cast and retrieve too on this lake. But we do not spider-rig.

The shoreline of Clinton Lake is almost surrounded by trees that have fallen into the lake. People sink a lot of brush and numbers of Christmas trees in the lake. This lake tends to produce more white crappie than the other lakes I’ve mentioned, and we usually have to fish deeper in this lake than we do in Springfield or Sangchris lakes. But in the spring, we also fish shallow water often. We mainly catch crappie there by vertical jigging. Vertical jigging on this lake tends to produce more white crappie than black crappie. I have some clients who want to fish just for black crappie on Clinton Lake. So, I rig differently, and we concentrate on fishing for black crappie. The one major problem that I have with fishing Clinton Lake is that I believe that everybody in central Illinois fishes this lake. There are also about nine or 10 crappie guides on Clinton Lake. When I first started fishing Clinton, there were only two other crappie guides on this lake. This lake has a lot of shore access, so putting your boat in and fishing there is easy. I primarily concentrate on Springfield and Sangchris, especially since I’ve got a second boat with a 25-horsepower outboard motor to fish with on Lake Sangchris.

However, once the power plant starts generating power again, the crappie will move back up into shallow water, and you can catch them in 2-3 feet of water. You really need to know when the power plant is shutting-down, and when it will be running, if you want to fish for shallow-water crappie. Usually the plant will be shut down for a week or two at a time. If the power plant’s shut down, I usually take my clients to the west side of the lake and fish deep water. However, when the power plant comes on, I may stay on the west side of the lake, since when the warm water is running, there may be 100 boats fishing the shallow water along the bank.

In the spring of the year, most crappie fishermen want to fish shallow water. However, your chances of getting your limit of crappie when you’ve got 100 boats fishing the same bank are slim on the east side. Even when the water on the west side of the lake is running, many people have learned what I have – you may catch your limit on the west side fishing deep brush, since most of the anglers are fishing the warm-water discharge. 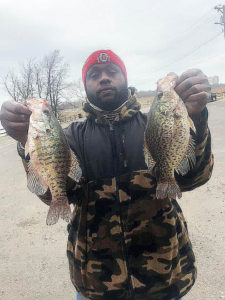 When people call and want me to take them fishing, they already may have decided what lake they want to fish. That’s fine with me, because I can catch crappie and white bass on all three lakes. I’m located about 3 hours from Chicago, and about 80 percent of the anglers I guide come from Chicago or its surrounding suburbs. If my clients are coming for a weekend, and they want to fish for two days with me, they’ll usually want to know, “Where can I stay? Can I camp? Do I need to bring a camper?” Or, they already may have selected the place they want to stay at one of these lakes. If my clients live in Springfield, more than likely, they’ll want to fish Springfield. Clinton Lake is somewhat closer to Chicago than the other lakes. So, they’ll have less drive time if they live in Chicago and want to fish Clinton. Springfield is about 50-miles farther from Chicago than Clinton Lake. Some of my clients say, “I don’t care which one of the three lakes we fish. You tell us which one the fish are biting best on, and we’ll meet you at that lake.”  One of the problems when you’re fishing for crappie and/or white bass is that you’ll catch some other species as well as the fish you’re targeting. We catch quite a few largemouth bass.

When I do crappie-fishing seminars at Bass Pro Shops (www.basspro.com), there usually will be some bass fishermen at the same venue. Most of those bass fishermen will have their baitcasting rods and demonstrate how accurately they can flip a jig into a Styrofoam cup. Often they’ll give me fits about fishing with a little crappie rod. So, at the end of January, 2019, on the last day of my seminar at Bass Pro Shops, I took my ACC Crappie Stix dock-shooting rod to the seminar. I demonstrated how I could shoot a 1/32-ounce jig into one of the Styrofoam cups at a farther distance than they were flipping their bass jigs. 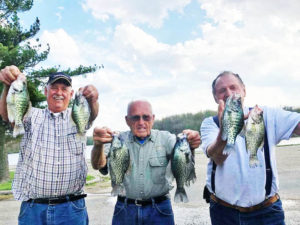 The number of bass we catch on a crappie-fishing trip varies with each trip. Some days, we won’t catch any bass, and other days we may catch 10 or 15, while we’re crappie fishing. The biggest bass I’ve ever caught on my ACC Crappie Stix rod was a 6+ pound largemouth, and that was really a lot of fun. The Crappie Stix rods have the sensitivity in their tip sections for the angler to be able to see the lightest crappie bite, but farther down the pole toward the butt, there’s also a lot of power to land a bass, if you get a bass bite. As I’ve mentioned before, my favorite way to crappie fish is shooting docks. I tell newcomers to dock shooting, “The main thing to remember when you’re holding a crappie jig between your thumb and index finger, and you’re bending the rod is to make sure the point of the hook and jig are pointing away from you.”

You can go to Smith’s webpage www.centralilcrappieguide.com to see the fish he catches, his trip information and pictures of his clients and the crappie they catch. You can call him at 309-642-8106. He also has a Facebook page https://www.facebook.com/reagsguideservice.